Here are a few things to remember during your time in Gdansk. Strange people standing on the side of the road holding cardboard signs written "nocl

Above: Baltic pirates of the seas Left: Pink barons of the sky Below: Polish lords of the deep By Air These days, travelling to Gdansk by air is…

Above: Plane sailing Left: Few know about the Bangles' other hit 'Kitesurf Like An Egyptian' Below: Feelin' seasick? Take the trusty SKM! By Taxi T

Don't assume that your hotel will take credit cards, though things are steadily improving in this area. Cash is still king in Poland, so make sure…

There's no hiding it - Polish is a tough language, any early efforts at which will have you sounding like you're whispering and choking…

The millennium of Gdansk was officially celebrated in 1997, but most historians date the founding of the city to around A.D 980. It was originally… 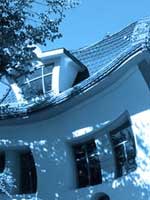 Above: Sopot's Krzywy Dom
Below: The Stutthof Concentration Camp 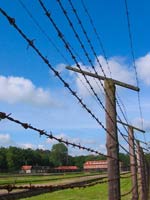 'Danzig in the Spring of 1944 had an atmosphere quite unlike that of any other German town I visited. It was not unlike Edinburgh, for both had been left untouched by the destruction of war... As I walked up the broad, cobbled streets, with their set-back painted facades and with trams squeezing under the low brick arches, I found it hard to believe that this was the match that set Europe alight.' The recollections of this British soldier on his escape from Marlag stand in stark contrast to the dramatic finale of the war. Danzig bore the brunt of the damage on the Baltic coast, and following the Soviet 'liberation' in 1945, the 470,000 German inhabitants of the region were forced to resettle in the new Germany.

At the decree of the Great Powers, the city that re-emerged from the rubble was Polish, and the controversial matter of the Danzig corridor - 'the match that set Europe alight' - was settled. Thus a city that had been founded by Polish King Mieszko I in 980 - but which had been firmly out of the Polish orbit since 1792 - was re-christened with its original name, Gdansk, and a vast rebuilding project was begun.

Few Poles would have expected such a turnaround, but the city that emerged from the rubble is today one of the most vibrant cities in Poland. The dedicated reconstruction of the Old Town has been a triumph, and as one wanders about Gdansk's sweeping boulevards, one discovers a city that still resonates with the splendour of its past status as the most bountiful port on the Baltic.

Yet the 'Tri-City' has plenty more to offer besides the majesty of Old Gdansk. Sopot, a twenty minute train ride north from Gdansk, was once a swish resort for the jet set of the 20's and 30's. Today it has regained its pre-war vitality, and in terms of nightlife, restaurants and sheer buzz, it already outshines its more venerable neighbour.

Heading still further north one finds Gdynia, which was propelled into the limelight in the 1920's, when the Poles sought to construct their own port on the Baltic due to the complications of Gdansk's status as a free city. Slower to blossom than Gdansk and Sopot during the post-communist boom, Gdynia is now getting into gear itself.

If you're looking for a tonic to balance out your urban adventures, the sea is splendidly close at hand. The ominously named Hel, a short bus ride north of Gdynia, is a favourite in this neck of the woods. A beguiling little fishing town, it's a great (and distinctly unsatanic) place to unwind, whilst Leba, to the west of the Bay of Gdansk, is arguably the best of the bunch on Poland's coastline.

Few would argue that the region around Gdansk is a 'Polish Tuscany', but if you're curious about heading further afield, the decision to explore could well pay off. Within an hour of Gdansk lies Malbork, a gargantuan edifice that was once the chief stronghold of the Teutonic Knights. On the other hand, the delightful city of Torun, which lies a little further to the south, is a laid-back gem that's well worth a look. Torun managed to come through the ravages of war pretty much unscathed, and as such it remains one of the most charming cities in Poland, and still largely undiscovered by the crowds.

We intend to spend some time in Gdansk and then go to the Masuren for a bicycle trip. And go back to Germany from Warzaw. Can somebody help us with the following questions: a) How to get from the airport to Gdansk with a bicycle? b) And how to get to the area of Gizycko (with the bicycles)in order to start our bicycle trip Tks

Hi, Can anyone would tell me if what should I do if I travel Gdynia probably near Pomorskie area. I would love to see Poland and I wish to comeby one this this year. What should I do and not? Where not to go and why? How much money should I take with me? Any help or tips would be great. I love to come there so positively as this is the place of my beloved one.

A beautiful triumvirate! Each of the three towns has their charms. Sopot is best enjoyed on your own, but maybe for Gdansk, given its historical character, a tour guide will help you make the most of your sightseeing!

Ihad the pleasure of visiting Poland for ten days in August. I loved it! The tri-city rocks. Gdansk was historical and beautiful. The zoo is a must see. The beach in Gydnia was great and Suppolt rocked at night.