The millennial history of Gdansk, like the history of many cities, is filled with ups and downs. But, unlike many other cities across the world, Gdansk's history has a certain lateral motion, as it was tugged back and forth between the Poles, the Prussians, independence, Soviet influence, and even the Napoleonic armies. Through it all, the drive for wealth and self determination were always present and the storied past made it a likely home for its most recent historical surge: Solidarity.

First mentioned in the records, in the year 999, as "urbs Gyddanzyc," Gdansk has come a long way from its humble beginnings as a provincial capital and small trading port. Gdansk quickly began an upwards climb, only to be tied under the influence of the Teutonic Knights in 1308. By then, Gdansk already had a sizable middle class and resembled an Italian city state, rather than a German or Polish city. Under the Knights, a great many churches were built and the Old Town took the shape which it still bears today. However, the city supported the Polish King against the Teutonic Knights in the 13 years war. Once the Knight's power receded after their defeat at Tannenberg, Gdansk continued to thrive and an influx of immigrants and merchants from all walks of life made the city a jewel in the Polish crown - although it was a rather feisty and independent jewel, to say the least. While nearly all of Poland remained Catholic, Gdansk was a hotbed for Protestantism to such an extent that the Catholics became a minority of the city's population. Since Gdansk was a place whose priorities lay in trading and other worldly pursuits, it was a very tolerant city and Scotsmen, Jews, and great enclaves of other peoples made their homes on its shores. All these people lived and fought together, repelling the Swedish armies of the 17th century and the Russian and Saxon armies later. 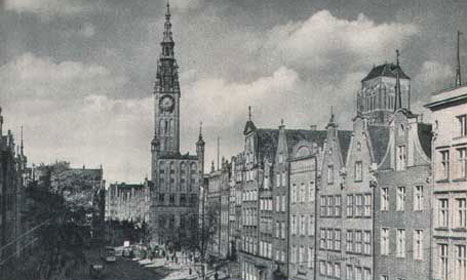 But the city would not stand forever and, during the first partition of Poland, the Prussian King Frederick II sucked the city dry through a series of harsh embargos. Trading privileges and satellite towns were sundered from the city. However, Napoleon Bonaparte played the role of saviour and established Gdansk as a free city after defeating the Prussian resistance. Gdansk, in its weakened and slowly industrializing state, would be subject to the whims of the great powers from that point forward, right up until the collapse of the Soviet Union. The Congress of Vienna made the city Prussian once more, while the treaty of Versailles made the city free, rather than a part of Poland. In 1939, the fascist-controlled city leadership annexed the city into the 3rd Reich, and despite the Polish bravery at Westerplatte and the Polish Post Office, the city was taken. During the Second World War, the city was bombed heavily by the British, and during its liberation by Soviet troops was damaged and razed even further. The 124,000 Germans living in Gdansk were forced to emigrate and the city was a burned out shell of its former self.

However, Gdansk would soon get back to business: the city was rebuilt, with many buildings reconstructed true to their old form. Meanwhile universities were successfully established and the city's shipyards became booming industrial sites, which were to help shape the future of Poland, and by extension the whole of Eastern Europe. In 1970, the first strikes of the workers began and, despite a number of murderous attempts to quell the unrest, labour discontent would continue until Solidarity became the dominant political force in Poland - with Lech Walesa at its head. Gdansk became the lever by which Soviet oppression was forced from Eastern Europe and the recent election of Victor Yushchenko, in Ukraine, bears the legacy of the Gdansk shipyard workers.

Today the city has little political influence but stands out instead as an example of economic progress in the liberalized Polish market. It is also a wonderful place for tourism, and is increasingly drawing people from all over the world to sample its charms - especially in the summer months, when the beaches fill with people and great number of fairs and festivals, come to town, including the 700 year old St. Dominic's Fair!

good insightful narrative. Visited Gdansk and am writing a romantic story that takes place in that wonderful city. The title of my book is STOLEN TEARS, A LOVE STORY. It centers on a young couple who fall in love, and the tears shed by our young maiden mysteriously vanish. It might even make you cry.

You can still see the influence of all the different nations that controlled Gdansk over the centuries. I also thing the locals feel themselves to be somehow different from other Poles.

what is the percentage of various religious groups today: Lutheran, Catholic, Jew, other?

napoleon did NOT SAVE DANZIG, AS THIS ARTICLE INDICATES, ONLY AN IDIOT WOULD BELIEVE SUCH NONSENSE.

I have visited Gdansk several times. Oue son, Karl, emmigreted to Gdansk when he married a native Polish girl, Karolina. They own an apartment in the city, and a second home in the country. They have a three old daughter, Bianka. K & K own two cafes, Cafe Absynthe, and La Dolce Vita. Karl now has polish citizenship. He will only return to the USA for visits. Gdansk is a very good place to visit and enjoy history. WWII started in 1939, when the Nazis invded Poland. The beautuful old buildings have been restored to their original splendor, especially the churches.