The Brama Wyzynna, or Upland Gate, is the most impressive of all Gdansk's entrance gates. This gate marks the start of the Royal Route on Boguslawskiego Street and was part of the city's fortifications from the 16th to 19th centuries. In those times, the gate would have been flanked with an earthen wall of equal height, but today the gate stands alone. Regal lions sit proudly on top of the gate's roof and the gate's frieze bears the marks of Gdansk, Royal Prussia, and Poland. Below those emblems is a Latin inscription which reads 'Justice and piety are the foundations of all states.' Solid defensive structures like this one helped the just and pious rulers of Gdansk defend themselves and their city from the not so just and the not so pious. 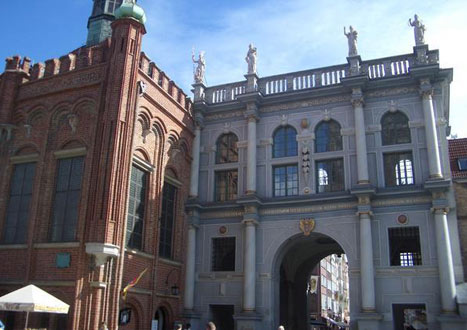 The Zlota Brama, or Golden Gate, is the second gate on the Royal Route. The gate was designed and constructed for the St. George Brotherhood, an elite rifle club and social group, by Abraham van der Block and Jan Strakowski. The gate is a mix of Flemish and Italian styles and since its reconstruction and renovation it has served as a symbol of the city as a whole. The actual portal of this gate is slightly rotated, so that as you walk through the gate, you are treated to an exceptional view of Dluga street and the Old Town Hall!

The gate itself is adorned with gold trim, but has a very clean, sharp look to it. Eight figures stand proudly on top of the gate, four facing the Upland Gate (Peace, Freedom, Wealth, and Fame) and four facing Dluga Street (Concord, Justice, Piety, and Reason). Below the figures, but above the proud Gdansk City symbol, reads another Latin Maxim: 'Small states grow in harmony, large states fall in discord'.

The Renaissance Green Gate stands on the site of the most ancient gate in Gdansk, the Koga Gate. This gate was built to serve as the formal residence of Polish monarchs, but was only used for that purpose once in its history. There are four arched passages through this gate and there is a symbol over each: The eagle of the Prussian Kings, and the emblems of Poland, Gdansk, and Royal Prussia. Today, the gate is managed by the Polish National Museum and is the home of a great many exhibitions and galleries. Former Polish President and symbol of Solidarity, Lech Walesa, has his office in the Green Gate and if you know the secret knock, he'll let you in and let you try on his Nobel Peace Prize. This gate marks the end of the Royal Route, but hang a left and enjoy a stroll down the Motlawa River, or go straight over the bridge and take a look at Granary Island.

Built in 1450, the Chlebnicka Gate marks the end of Chlebnicka street and opens up onto the Motlawa River. Built in the Gothic style, the gate is made of brick and has a pointed arch, but the true sign of its age is the symbol carved on the Motlawa side. The symbol, a shield with two crosses but no crown, was the oldest crest of Gdansk and can't be seen anywhere else in the city! On the opposite side, a stylized lily greets travellers and gives the gate its second name: the Lily Gate. In the nearby rivers and canals there are some rare varieties of lily, so after seeing the stone version, hop in a canoe and paddle on out to see some of the real things!

The charming and truly unique Mariacka Street is closed off on one end by the towering Mariacka Church and by the Mariacka Gate on the other. The gate allows pedestrians passage from the Motlawa to the cobbled roads of the Old Town and the famed porches of ul. Mariacka. This defensive structure was built in 1485 and is built of dark, almost brown, brick. Two towers rise up from the top of this fort, and the windows are small and secretive. When one is walking along the Motlawa, enjoying the vendors or restaurants, he or she might hardly notice the exceptional and almost out-of-place look of this building, but to see it from Granary Island you'll notice that its dark, Gothic style sticks out like a sore, impenetrable thumb!

The massive Lower Gate, or Brama Nizinna, closed off the city's entrance from 1626 onwards. The nearby hill affords a view of the Baroque bastions and water curtains, connecting the dams on the Motlawa, which form a semi-circle around the Lower City, together with the Spichrzw Island and Stare Przedmiescie district. This gate is massive, but in modern times has found itself somewhat isolated and forgotten. Definitely have a look at it on your way to the old moats and man-made hills, but having done so, we would recommend moving on. The gate hasn't been renovated or restored in some time and not many tours make it to this once proud fortification.

The Krowia Gate, Straganiarska Gate, Swietojanska Gate, Zulawska Gate, and the famous Gdansk Crane are all situated on the Motlawa River and once guarded the city from amphibious invasion. Of these gates, the Crane is clearly the most notable and interesting, and as you pass under this landmark you can still see the huge man-powered wheels which hoisted the masts of ships during medieval times! Do you have children who just won't stop asking you to buy them a gofry? Perhaps the museum curators will let you throw them in the wheel for a while so they can tire themselves out trying to get somewhere on the perpetually-fixed hamster-like contraption!