The Gdansk shipyard (Stocznia Gdansk) has been called the crucible of modern Europe. History chose this site as the beginning of the end for the 20th Century, and although Gdansk has a history of over 1,000 years and is the city where the Second World War began, the Gdansk shipyards are the space that will mark the city's place in time forever. The city of Las Vegas has a slogan proclaiming that 'what happens in Vegas, stays in Vegas.' The exact opposite is true of Gdansk. Their slogan is 'What happens here moves the world.'

North-west of the Old Town, on the Martwa Wisla, the insect-like cranes of the Gdansk shipyard's work to manufacture, repair, or load the ships which have made this port city the most important in Poland today. The legacy of shipbuilding in Gdansk is not a contemporary phenomenon, but one that reaches back in history to the days of the Teutonic Order. It was during those times that Gdansk was first awarded trading privileges on a meaningful scale, becoming a part of the powerful Hanseatic League. After the grip of the Teutonic Order was removed, the city was further bolstered by the Polish King and by 1460 was the shipbuilding center and main port of Poland. The Crane which sits on the Motlawa river was build during this time and was used to hoist the masts of ships, as well as load them with goods. Over 20,000 craftsmen worked in the city, which also had four times the number of artists as the then seat of royal power, Krakow. The ships built here created wealth and prosperity for the city, but also protected it from invasion, most famously in the Battle of Oliwa (1627) when the Gdansk navy repelled a Swedish flotilla. 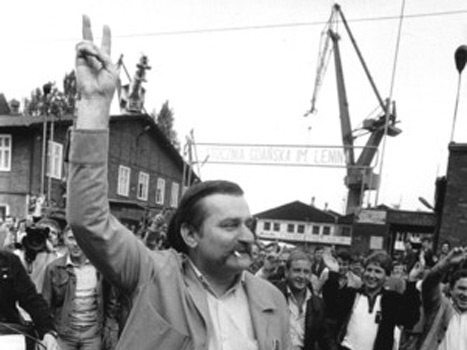 When the industrial revolution began, the latest shipbuilding technologies found an eager home in Gdansk, as Herr Klawitter built the Klawitter shipyards, a bit to the south of where the Gdansk shipyards now stand. The first iron ships were built here, but in the ever changing world driven by the industrial revolution, the focus of Gdansk's shipbuilding efforts eventually moved up the river, to their current location. After the Second World War, and Gdansk's bloody 'liberation' by Soviet troops, the Lenin Shipyard became the main hub of the city's workplaces. Later it would become a hub of European history.

In 1970, a number of shipyard workers were killed in clashes with the militarized police, known as ZOMO. Ten years later, Lech Walesa would lead the workers in a new series of demonstrations, fighting the forces of Soviet Communism in the name of Solidarity. What began as protests over the price of meat, would become a 10 million member Solidarity Trade Union, which would be the shore upon which the wave of Soviet regime broke. As that wave receded, a series of peaceful revolutions inspired by the non-violent strikes would liberate Eastern and Central Europe: a process which continues today.

In recent years, the state-owned Gdansk shipyards have fallen on hard times, as the wave of capitalism has created havoc, just as the communist tide vanished into the Baltic. A leading politician here was quoted as saying, "Workers fought communism because they wanted honorable working conditions... conditions have gotten worse and there's no Solidarity if skilled Polish workers are washing dishes in England for want of work." Once a place of work for over 20,000 people, the Gdansk shipyards provide only 3,000 jobs today.

Visitors to Gdansk's shipyard will come to Solidarity Square, which is located at the shipyard's gates. Here, a monument to the fallen workers of the 1970 strikes welcomes those who would pay their respects to the brave men and women who won freedom for an entire continent. Three forty-two metre crosses form a tight triangle, and the square itself is lined with plaques and even a monument to John Paul II, recognizing the role of Christianity in the success of the Solidarity movement. A solemn poem, engraved in one of the plaques reads: You who have wronged a simple man... Burst into laughter over his suffering... DO NOT FEEL SAFE.

any oppurtunity for mig&tig welder u turn

I was this week there in that area. Very interesting. Especially this temporary modern art exibition of local artists. Pls write more about it.

please any one me about euro nova shipyard job.

I have visited here and this is a good article for tourists. Try a bit harder doing your 'research.' For goodness sake!

Unfortunately, it looks like the shipyards will soon be closed down due to economic difficulties. If work really stops, that will be a tragic day. These people deserve to be better looked after for what they did for Poland.

Wow. I don't know if you guys from the states are joking or idiots. This is TOURISM website. It's not supposed to have any deep historical analysis. You can argue that its too long, short, whatever. But the fact that you are doing 'research' (and, apparently, historical research), using a tourist website as a source... US education is really in the doldrums.

Shes some light on what happens to labor unions when they are created. Solidarity was good at the outset, however workers have seen less need for the organization in recent years. It served its purpose by helping to overthrow Soviet Communism. Today, the jobs are not there because work has been dispersed around a "free" Poland and other European countries.

I agree with amy up at the top. I'm 14 and im doing research for a project at my school. I thought this was a good website but turns out not so much. not enough research. sry

You could make the history a little less detailed and dramatic. Most people looking here are doing research and want it quick. Like me. If you don't make it simple people will get bored and leave. Others wont understand. I barely did. :)

I think it needed more information for a childs point a veiw.

Michael Pl, you would be even more astonished upon learning how huge reservoir of competence of ship designers, builders, craftsmen, dockers in Gdansk and Gdynia is being sunken by incompetent authrities neglecting the shipyards once a golden eye of Polish economy and pride if people.

I was totally confused by reading your article.Workers struggled against communism and lost their jobs under prosperous capitalism.They initiated peaceful revolutions over European continent and after them Europe became full of wars.I was communist at eighties when I was young and now that I am middle aged I feel that I am more convinced communist from what I've seen.

If you're in Gdansk, the shipyards are a great place to explore and easy to infiltrate. Seems you can just walk in and mill around, no questions asked. It's kind of a creepy, unkempt place and therefore great for photographs. There is an artist colony inside Stocznia Gdansk and some cool stencil art and imagery around the building. Inside, is filled with studio spaces where they sometimes throw parties. Keep your eye out for it, it's very close to the Roads to Freedom exhibit and across from it is a rundown theatre.

Regarding the last sentence, I would hardly call Milosz's words "solemn;" more like ominous and slightly menacing...