The drifting, patient river Wisla quietly passes beneath the massive brick walls and towers that form Malbork's western fortifications. From the opposite bank, the castle fills your entire view and without so much as a telephone pole in the picture, you're transported to the fourteenth century. Or, if you've been reading too much C.S. Lewis, perhaps you'll see yourself in Narnia. Maybe Jimi Hendrix has moved you to a 'castle in the sky' but let's not get too carried away here.

From Gdansk's main rail station, Malbork is only 60km, 60 minutes, and 10 zloty away! If you've been in Gdansk for longer than 2 days, set aside a few hours and make the short trip to this splendid edifice. There are many magnificent historical buildings in Gdansk, but in Malbork you can see history in isolation. It's just you and the castle, particularly if you go in the early fall, after the crush of tourists has passed. 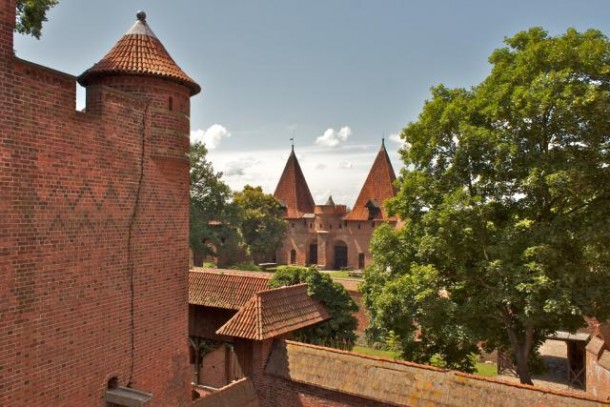 The history of Malbork begins in the Holy Land and by 'Holy Land' we mean Palestine, not the Krispy Kreme Donuts factory. Allow us to introduce you to the fabled Teutonic Knights, a rowdy band of monks with a lust for slayin' and convertin'. After Palestine was lost to Islam, these zealots needed a new base of operations. But the Crusades were partly an excuse to get people like this out of Europe, so no one wanted them back! Finally, a Polish King offered them sanctuary in return for help against some pagan Lithuanians. The Knights were happy to help, but they were also happy to form their own state and control the amber trade. Also, they massacred the citizens of Gdansk in 1308, which they were supposed to be protecting. Whoops.

Obviously, these actions didn't exactly sit well with the Polish King, who promptly allied himself with the Lithuanians who were being constantly raided by the Knights. In 1410, the massive battle of Grunwald saw the defeat of the Teutonic Knights, but the stumbling Polish King stalled out and was unable to rout them from Malbork, where they had been constructing and improving a massive castle since they first established themselves in the region over a hundred years prior. They called the castle Marienburg (St. Mary's Stronghold) in case you hear that name, rather than Malbork.

The Teutonic Order continued to decline and in 1457 the mercenaries working for the Knights decided that it was a good idea to take the castle for themselves and sell it to the Polish King. Gotta get paid somehow, you know? Anyways, the Polish monarchy kept Malbork in decent shape for the next few centuries. Royal persons would rest their weary feet in its awesome rooms and vaulted hallways while travelling to and from Gdansk. Perhaps it was this leisurely attitude that led to the Partition of Poland in 1772, upon which the castle was controlled by the Prussian rulers.

Unfortunately, the Prussians turned the magnificent castle into a barracks and many of the out walls and towers were taken down, many windows were bricked up, and much of the splendor was lost. Of course this gradual decline and industrial transformation was preferred to the bombing, destruction, and looting done to the fortress by the Soviet army, and by the end of the Second World War, Malbork was basically a shadow of its former self.

Today, the castle has been renovated and reconstructed, as faithfully as was possible. In general, reconstruction work throughout Gdansk and its neighbors has been incredible and Malbork is no exception. In 1997, the castle became a World Heritage Site. Bristling with weapons displays, the medieval historian inside all of us will revel in the sheer amount of exhibits and displays. There are also a great many amber exhibits, as well as entire rooms devoted to the Teutonic way of life. Half the fun is actually just running through the hundreds of empty corridors, imagining that there's a battle going on, but for the kids there are some cool wooden weapons available for purchase.

The 'Siege of the Malbork Castle' is the biggest event of the summer, but there are a number of smaller fairs and festivals throughout the year. Tours of Malbork Castle are available in English, German, and Russian but it takes a good 4 hours to see most of what's inside, unless you're hunting for some ghosts, in which case you'll need more time to set up your equipment. Whatever your aims, you'll be sure to leave the castle with a smile on your face and thoughts of forming a metal band named "Teutonic Pagan Slayer." Rock on!

Photography by futureshape (CC by 3.0)

Lived in Poland for 2 years. The Poles are tough and wonderful. Malbork Castle is one of the great gems of Europe , a highlight in a beautiful land, and a wonderful journey into a past time . A must see. Thank you Poland from Australia

I visited Malbork Castle in June 2012, while my stay in Gdansk. Its exquisite brick walls, relics of Medieval times, and beautiful ornaments impressed me very much. Along with the beauty of this citadel, Polish people were very kind and helpful. It's worth to visit and feel the atomospher of Wielko Polski!

The Malbork Castle (or Marienburg) is not romantic at all as others have posted as well. But it is really impressive. Actually, by size, it is the biggest castle in the world according to this article about Malbork http://www.everycastle.com/Malbork-Castle.html (or Marienburg if we take the German version of the name). Great article about the most beautiful Polish castle!

One can tell that the review was written by a person with an American perception of the world-mixing cinema and children's fantasy (narnia) and shoppping (capitilism and entertainment) with historical reality. Having researched acceptable amounts of European Medieval history-one fails to find anything particularly romantic about that period of time. For Polish people-the Tuetonic knights were representative of an oppressive regime that invaded , colonised ,and masasacred the iunhabitants of their country-the Tuetonic order calling this invasion a "holy crusade" -a classic example of religious bigots using Christianity to justify their acts of genocide and barbarity. The Tuetonic invasion of Poland was a military/colonial expedition,an attempt to impose German culture and catholic Christianity upon the people in this region-the true motivating afctors being greed for land ; and greed in terms of the potential tax revenue the Teutonic order extracted out of the Polish population of the area(known to the Germans as east prussia) Malbork/Marienberg castle is a hugely impressive structure-being simultaneously a bank,a Tax revenue office,a military installation,and a prison for Polish dissidents and rebels,who stood up to Teutonic Authoritarianism.Marienberg Castle is also a monument to German colonialism ,taxation,and muscular Christian Imperiualism. the castle has been carefully restored after the damage inflicted during the second European tribal war. Definitely recommended and worth a visit.

I like the castle very much! A chef kindly gave me a book containing places of interest in Poland.Malbork castle looks good,old and slightly mysterious.

Malbork Castle was one of my stops while in Poland. The castle and tour guide were great. Having stayed in Poland for several weeks...I can honestly say the country and people are well worth visiting...just don't forget to check out the castle while you are there!

Malbork is on the Vistula DELTA, which has a whole bunch of rivers. Anyways, Poland is awesome and I'm proud to be 100% Polish. This site was very informative, and everything is actually true.

Malbork Castle in Gdansk Poland is very beutiful and the size of a small city. I have been there before. All the information in here is correct nice and great.

Malbork Castle in Gdansk Poland is very beutiful and the size of a small city. I have been there before. All the information in here is correct nice and great.

I visited Gdansk and Malbork in winter 2004 on a cold rainy or snowy day---it was fantastic: a major attraction for all Poles and foreign visitors alike. I believe it claims to be the largest castle in Europe (I think Spissky Hrad in Slovakia also makes that claim, but it is only ruins). The castle is super easy to get to from Gdansk; no need for car at all; trains run very frequently, as Malbork is right on the main line heading south out of Gdansk to Warsaw, Krakow, and most of the rest of Poland.

The last time my wife and I were in Malbork and the Tri-city area was in 1983. We had a great time then and can't wait to go back.Poland is a great country to visit and explore and the people are fantastic.