With a population of over 250,000 and one of the most buoyant economies in the whole of Poland, Gdynia is certainly going places, and it can no longer be dismissed as the grey counterpart of neighbouring Gdansk and Sopot. Certainly, it has none of the flamboyant sweep of its neighbours, (although fans of Bauhaus won't be disappointed by much of the architecture). Gdynia has plenty of tricks up its sleeve. And belying its reputation as a business hub, Gdynia is certainly no pauper when it comes to cultural attractions. The city can boast one of the country's top film festivals (often dubbed the 'Polish Cannes') as well as a lively Summer Jazz festival. Aficionados of both film and jazz will need no introduction to Poland's marvellous legacy in these arts. 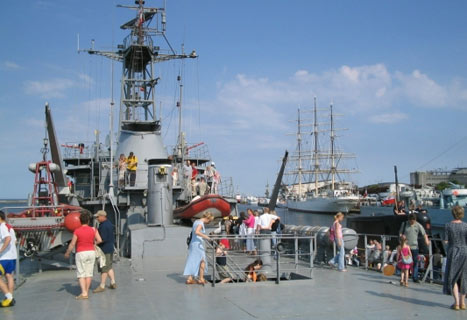 Gdynia's rise, or indeed catapult to fame is certainly unusual. For centuries it was little more than a humble Kashubian fishing village. However, with Poland's rebirth after the First World War, the newly resurrected country was in need of a port on its northern seaboard. The decision by the Allies to make nearby Danzig (Gdansk) a free city, had complicated matters, and the Poles were obliged to build afresh. Gdynia was ear-marked for development, and progress was rapid.

Two ports within such close proximity of each other led to predictable rivalry, with business in Danzig - a predominantly German city - suffering an unavoidable blow. It was the 'Danzig Corridor', a major bone of contention for the Germans, that eventually sparked the war, following Hitler's appropriation of Austria and Czechoslovakia. Although the ports themselves were destroyed (they were carefully rebuilt afterwards), Gdynia survived the war, and like Gdansk, many new settlers came here from the lost eastern cities of Vilnius and Lwow.

Gdynia today is poised at an interesting stage in its development, riding on the crest of Poland's economic reforms. The harbour area remains a diverting part of town to start your exploration, with a good smattering of museums, restaurants and other attractions, not least the popular Teatr Muzyczny (Musical Theatre) which has one of the liveliest repertoires in the north of the country.

I think this is a real great blog post.Thanks Again. Keep writing.

Hi. Anyone who remembers how long the cruise Gdynia to London 1939 took? Days? Directly to London? Any info would be appreciated. Thank you!

Thanks for sharing, this is a fantastic article. Cool.

I am from GDYNIA. Settled in US since 1970. Came to visit my Father, a WWII veteran who was drafted to the army in the beginning of war in 1939 ( I was 7 ) . He was taken by the russians on eastern front and spent 2 years in Northern Russia. Got out with General Anders and joint the united army under gen. Montgomery. Fought the Germans in Africa, Italy (Monte Casino ) he could not come back to Poland after the war ended, when he heard what was happening to his friends. They never saw their families ( STRAIGHT TO RUSSIA ), so he came to the USA. Since Poland was still under the russian rules , he convinced me to come permanently. So here I am. I still miss my city GDYNIA it is so beautiful. I keep going often back to visit.

My father came from Gydnia and also fought in the war with exactly the same route as yours above - also fought at Monte Casino and is considered a hero back in Poland. He too would not go home as he too feared the Russians and he sadly died having never returned. He always talked very lovingly about his home though and I have visited his (and my) family there often. They are wonderful people.

I'm from Gdynia. For any tickets cash is only option. Most popular payment method in Poland is still cash. But in most restaurant and in some caps is possible to pay card. You must ask. Better is to have some cash in wallet. From Gdynia port to skm station it takes 15 minutes by walk, no need to take taxi if weather is fine. All taxi are legal, but my advice is ask for price before you get in the car. Cost should be under 5$. Gdynia is safe place, enjoy your trip.

Can I use credit card alone in Gdynia and Gdansk? We will arrive by cruise ship at Gdynia; then we plan to take SKM train to Gdansk. Can we buy SKM ticket and bus ticket by credit card? Can we pay for museum or shop purchase with credit card? If we take a taxi from Gdynia cruise port to the SKM station, how much? Does taxi accept credit card? How can we tell if a taxi is legal? Thanks

If you want to know some Polish culture, not only city center, or need someone who help you look around 3city. Im not a translator, my english is medium but I have a konwledge about places. Invite, My mail : aleksandrastruniewska@wp.pl

I would like to know the real story about the German battleship Gneisenou that was sunk in the harbor of Gdynia Poland. I have pictures of sitting on the bottom in the harbor near the breakwater back in 1944.

I can honestly say that I'm lucky to have been born in Gdynia.I spent 20 fantastic yrs there,I have been living in Vancouver for the past 17 yrs now but I will always treasure the years I spend in Tri-ctity

We had to go to the hospital Gdynia, people we treated wonderfully, doctors were very professional, at the time of paying the mind hospital did not accept euros, dollars, nor credit card, taxi driver lent me money. There will be more generous than the Polish people?

You can get from Gdynia to Gdansk quite easy. The cheapest way is by suburban "SKM" train. It takes about 40 minutes to the center of Gdansk. Other way is by taxi. The one way fare should be up to 60 PLN (approx. 14-16 EUR). There is no direct bus line between the cities.

I consider myself to be very lucky as I grew up in this beautiful city. My mom lives there, so I visit quite often. I still miss the year-round salty wind on my face. It is wonderful place to visit in the summer, although winter is rather nasty - windy, cold and wet. ;) Anyways, I would recomend it to anyone!

It was my luck to visit this city.beautiful.but be careful if you are alone.if anybody need help,try to reach Stella Maris church in portowa street.

It was my luck to visit this city.beautiful.but be careful if you are alone.

I've been to Gdynia several times over the last 20 years and the improvment is noticeable. The port area is very interesting as is the Market which was a treasure house of stalls but is not so good nowadays. However to say that Vilnius was Polish is most definately wrong, it was always a Lithuanian City. It may have come under Polish military occupation after the 1914-1919 war but this was an illegal occupation by the Poles with a past glory complex and they were doing to the Lituanians what the Prussians, Russians and Habsburgs had done to Poland - lost eastern cities of Vilnius and Lwow. It would be like calling Edinburgh a english city, whereas everybody knows it's a Scottish one. Because there was a "unification" between the Polish Crown and the Head of the Lithuanian state does not mnake Vilna a Polish city. It was just a bit of land grabbing imperialism excuse being that there were Poles living there. There being "1 million Poles working" in the UK would not surely give the Polish state to consider making a claim on London!! Lwow was always a contested city and as such has a massive graveyard dedicated to both the Ukranians and Poles that fought over the centuries for it.

Our cruise ship docks in Gdynia. How far is it from Gdynia to Gdansk? Is public transportation readily available?

I would like to know how far Stutthof is from Gdanski? My cruise ship will be in port, and I would like to tour Stuffhof. Thank you for your help. Ann

nice site, i wish i could visit gdynia and méet my losing friend. He is Deltax alias Adrian from Gdynia. I have try to call his number but not active. Anyone help me?

Dear Sir/Madam, I would like to do my Chief Engineers(Unlimited) Exam in Poland. Please help me get their e-mail address and phone no or their web site address, thanks.

Can someone explain to me why Gdynians loath Gdansk so much? I have friends from Gdynia who absolutely refuse to go to Gdansk, haven't been there in years. My suggestions of going to St. Dominic's Fair (a world-class event) this summer were met with violent hostility and raised voices. Sheesh. Clearly you Gdynians have a serious inferiority complex. The best thing about Gdynia is that it's so close to Gdansk, Sopot and the rest of the great places around Trojmiasto!

Please do not judge Gdynians in a condenscending way until you have read your history and the reason behind the hostilities toward the Gdanskians. Gdansk was Danzig and the corridor between Gdynia and Gdansk was the reason Hitler started WWII.

Dear Sir/Madam, I first visited Gdynia in 1964, then found my polish family after 40years in May 2004 in Gdynia, I have returned to Gdynia seven times since. It is the most fascinating and charming town in Poland, it has a certain beauty and romance which is difficult to explain. When you stand at the top of the Kammiena Gora and look over Zatoka Gdansku it is the most beautful feeling you can imagine. The people of Gdynia are so friendly, kind and helpful even if you cannot speak Polish. I have travelled all over the world and visited some beautiful places but for me Gdynia and the whole of trojmiasto is without doubt the best holiday resort in Europe, it is so good I am looking to buy a house in Ulica Ejsmonda. Wszystkiego Najlepszego, Michal.

Well said. Thank you for straightening some prejudices due to ignorance. Best regards, Krystyna