Goldwasser liqueur (literally 'gold water' in German), has been a popular Gdansk tradition since 1598. And though other brands and distilleries have tried to copy it, Goldwasser continues to be inextricably linked to Gdansk.

A strong (40%) root and herbal liqueur, Goldwasser's famous feature is the small flecks of 22 karat gold flake that float in the beverage. Though the posh prestige of the alcohol has historically made it a favorite drink of such darlings as Russia's Catherine the Great, the rather diminutive gold flakes suspended in Goldwasser fail to make its price inordinate or its health effects negligible. 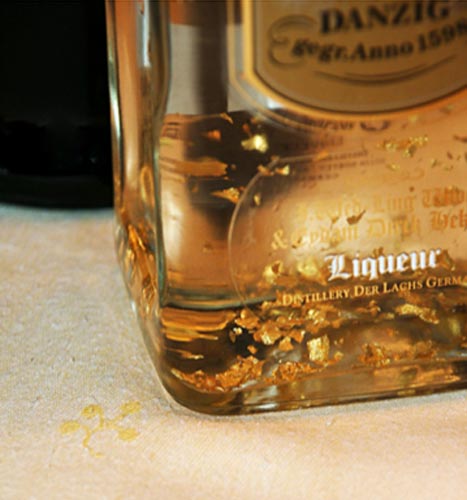 The mystic pursuit of alchemy was at its height when Goldwasser premiered in the 16th century and must have had its influence on Dutch Mennonite inventor Ambrose Vermollen when he concocted the gold-dappled drink, as gold was believed to have many desirable (though vague) medical properties at that time. The two most famous pursuits of alchemists (though they had many) were the attempted transmutation of lead into gold, and the creation of a "panacea" - a medical elixir that would cure all diseases and prolong life indefinitely. The ineffectual results of both these pursuits earned many alchemists the reputation of being charlatans and hoodwinks, though we can certainly accept Goldwasser as one of the advantages of their cultural leverage.

Local legend (which abounds in Poland) states several murky tales about the invention of Goldwasser, mainly revolving around the god Neptune bestowing the delectable drink upon Gdansk's citizens. In one he is so sick-and-tired of residents throwing coins into his fountain on Dlugi Targ that he strikes his mighty trident splaying shrapnel everywhere, and this, inexplicably, is why you'll find gold pieces in the vodka. The other, even more inherently suspicious, claims a Neptune overjoyed by the coins he was being lavished with decided to reward residents with an archetypal water-into-wine manoeuvre by turning the fountain water into vodka. Greedy merchants and landlords hauled it away by the barrel, but not the virtuous owner of restaurant Pod Lososiem - oh no; his vodka is filled with gold forever after for his good stead. Seems a bit of sly marketing on the part of the upmarket restaurant where the distillery once operated has entered the local psyche...

Back to Vermollen, believe what you will, but he invented Goldwasser in what was at the time known as Danzig upon earning citizenship in the German city in July of 1598. His distillery on ulica Szeroka featured a salmon ('lachs' in German) on its facade and his brand thus took on the name 'Der Lachs zu Danzig.' The rich, syrupy, gold-bespeckled liqueur proved incredibly popular and was soon being served in royal courts throughout Europe, Louis XIV purportedly being one of the beverage's greatest early connoisseurs. To create Goldwasser, some twenty roots and herbs were combined to give it its unique taste, among them cardamom, coriander, juniper, cinnamon, lavender, cloves and thyme. The recipe was kept in strict secrecy and passed down through the generations; today, Carl Graf von Hardenburg of Germany is the sole possessor of the original Danziger Goldwasser recipe. When Danzig was separated from Germany in the aftermath of World War I, Der Lachs opened a second brewery in Berlin to supply its western markets. Today the Berlin factory is the only to still produce genuine Danziger Goldwasser, though there are many similar Polish brands like Gdanska Zlotowka ('Gdansk gold') or Zlota Woda ('gold water').

The uber-exclusive Pod Lososiem restaurant now operates out of the building of Vermollen's famed historic distillery, which is still intact, though no longer in operation. Fans of Goldwasser may want to visit the charming riverside Goldwasser restaurant, where proper Goldwasser souvenirs can be purchased, though the place for the cheapest prices may be the airport's duty-free shop.

I have three very old bottles

i have an old 2/3 litre bottle of goldwasser gdanska zlotowka 70 proof produced and shipped by J. A. baczewski vienna austria unopened any idea on value ???? thank you

i have a BOLS 50s to 80s sealed gold flake liquer Dancing Ballerina vodka bottle from 70s. It has Bottle unit made in France and bottle cased in the Netherlands, Produced in the US the bottle and Reuge, St Croix, Switzerland on the winding mechanism. Plan to sell it on EBAY now that youj say it is 22k gold? Great gift and highly collectible.

Sorry I live in Australia.

Hi. I have a very old bottle of this gold wasser could you tell me any more? Thanks Rick

I have old Goldwasser Gdansk 1970

you can buy these cheap schnaps in every airport shp.

what strange questions you guys have!

Have 1940 ish bottle unopened.. Star of david on front and back of bottle .

Try EBAY! Those beingsold there are mostly empty bottles oe some without history.

I would like to know were I can buy "Der Lachs - Goldwasser Gdanks " because I finish my little bottle, and if is possible to find in Sud Tirol Italy!. Tank you A.Nigiotti

I have had a bottle from Germany and one from the US. About the same in taste but the color is diffrent. German one is a bit darker then the imported ones. Other then that I love it but is hard to find in tn so I usely bring back a bottle from my trips up to nj

i have a bottle of derlachs goldwasser with the seal still on it. anyone know how old this bottle might be? it's 80 proof and the sole agen is german distilleries ltd in the time and life building new york.

I had a shot of Goldwasser while I was in the Normandy area of France. I soon after came down with a horrible case of hives. Does anyone know if there could be some connection between the Goldwasser and my hives? Thank you.

I have inherited a bottle of Continental Gold Wasser bottled in Australia. Can anyone please tell me if safe to drink and about how old it would be. Thankyou

have a bottle of premier goldwasser faudor 23/32pint imported by kraus bros &co inc. it is a nice glass bottle with j zwack & co etched in the glass on the back unopend with red tax sticker across the cap. does anyone know the age of this or if its any good to drink ?

I have an unopened bottle, dark brown in color, of Goldwasser produced and bottled by JsaacWed-Ling Wwe & Eydam Dirck Hekker. It says it's a product of Germany and was imported by: National Wine & LIquor Importing Co. San Francisco California. Does anyone know roughly the date of it's production and also whether it has any additional value over what is now available?

A delicious beverage often used as a medicinal, much like the Anglo-Saxon Brandy. The issue of Jewish heritage/Star of David is totally false- Ambrosius Vermöllen (Gold or Gilt) was the inventor in 1598. Ambrosius is a common Catholic name, after Saint Ambrosius. Secondly, at that time- Protestant Holland was hostile to Catholics and many fled or were expelled, yet friendly to Jews- notably Antwerpe and Amsterdam. Whereas in 1600's Germany- Protestants were curtailed and Jews oppressed to the point of expulsion. Hardly likely a Renaissance Jew would apply for German citizenship in favour of a Dutch one.

A delicious beverage often used as a medicinal, much like the Anglo-Saxon Brandy. The issue of Jewish heritage/Star of David is totally false- Ambrosius Vermöllen (Gold or Gilt) was the inventor in 1598. Ambrosius is a common Catholic name, after Saint Ambrosius. Secondly, at that time- Protestant Holland was hostile to Catholics and many fled or were expelled, yet friendly to Jews- notably Antwerpe and Amsterdam. Whereas in 1600's Germany- Protestants were curtailed and Jews oppressed to the point of expulsion. Hardly likely a Renaissance Jew would apply for German citizenship in favour of a Dutch one.

I also have what appears to be a very old Danziger Goldwasser bottle. It has enameled pictures on 3 sides and has paper labels on the left and right sides. I also would love to see if anyone knows what it is worth. Thank you!

I would to take a look at the picture of the old (pre-WWII) bottle mentioned by a couple of posters. Please send if you have one...(stephen.naumann@web.de)

I have a very old Bottle Danziger Goldwasser,Must be before Worldwar 2.This is my believe since the bottle has has a Jewish Star in the glass above the label.The Bottle is in excellent condition for it's age.I would like to know if there is any interest by anyone and what the value of this bottle would be.I could E Mail a picture for publication.I am very curious. Wolfgang Thoss Canada

have an extremly old bottle.It is in perfect condition,seal in tact.Would like to know the worth.

Very nice subject.Have drunk Danziger Goldwasser all my life.Would like the e-mail address of the lachs distillery in Germany..Cn any one help?