A Walk Through History

The Royal Route is essentially a long street, leading through the centre of Gdansk, which once served as a path for parades, tremendous ceremonies, royal processions, and all other manner of celebrations. To simply walk down the Royal Route, you'll put yourself in close proximity to a great many of Gdansk's best treasures.

Your journey begins at the Upland, or Wyzynna, Gate. Inscribed at the top of this 16th Century fortification is the message 'Justice and piety are the two cornerstones of all kingdoms'. While the earthworks that once surrounded the gate are long gone, it's easy to see that this was once a formidable obstacle to invading armies. Just past this gate are the torture house and prison tower. There are still remnants of a chopping block and pillory, but unfortunately for fans of medieval violence, these buildings are in the process of becoming an amber museum. We're kind of disappointed ourselves. 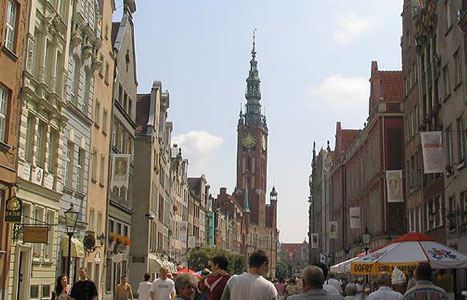 Next up is the Golden Gate adorned with stone sculptures of the figures of Peace, Freedom, Wealth, and Fame on one side and Concord, Justice, Piety, and Reason on the other. Above it all, the Latin maxim: 'Concord makes minor states grow, discord makes major ones collapse'. St. George Brotherhood Court stands behind the gate. This court was the home of an elite rifle club and it served as host to theatrical performances and numerous feasts.

Pass the St. George Court and you'll find your feet on the famous 'Dluga' or Long Street. This street dates back to 1331 and was the home of Gdansk's elite: bankers, ship owners, politicians, and...we don't know, maybe...really skilled dragon slayers. Their homes were lavishly decorated and the street is known worldwide for its beautiful facades.

But don't stop there! Buy yourself some tasty food from one of the many cafes or restaurants that line the street or enjoy a beer at an outdoor table, but then let's keep going! We know that you're jet-lagged, but let's not drag our feet - the stylish Lion Court is next up, and after that stands the Town Hall. The Lion Court was the home of the cultural and scientific elite (people who killed dragons with chemical explosives, rather than bravery or swords) and the Town Hall was home to the city's leadership. Inside the Hall are some truly jaw-dropping rooms, painted and decorated with extreme care and style. There is also a museum of history, so this building is really a must-see.

After getting used to the interior lighting, step back out into the blinding sun and find yourself in the Long Market, home of the Neptune Statue, which is an unforgettable symbol of the city. The long market was once home to the merchants and traders who called Gdansk home and is now the place to be on a cool summer night! Get your picture with the God of the Sea and have some dinner at a fine restaurant. Then take a seat at the Artus Court, which was meant to be a meeting place that would resemble King Arthur's famous Round Table! The buildings in Artus Court are spectacular and once housed the guilds which ran the city.

Finally, pass through the Green Gate, which is marked with the emblems of Gdansk, the Prussian Kings, Poland, and Royal Prussia. The gate now serves as the office of Lech Walesa, so make sure you pay him a visit as well, now that you have walked and experienced the Royal Route!