Gdansk is a city blessed with incredible architecture and a long history of Catholicism. One and one make two, so you shouldn't be surprised to discover that Gdansk is the home of many spectacular cathedrals and churches. Towering and awesome from the outside and spectacularly decorated and designed on the inside, these superb edifices are essential stops for any visitor, and beautiful places for reflection and prayer for those who live in the vicinity.

Dominating the city's skyline is the Gothic Church of the Most Holy Virgin Mary, commonly called St. Mary's Church or the Mariacki Church. The Church was built in several stages between 1343 and 1502 and stands today as the largest brick Gothic church in the world, at a height of 76.6 meters. Standing in front of the tower, one has the impression that the church is so massive that it's sinking into the ground, or that it has its own gravity. Interestingly, the tower has a flat top, rather than a spire - this is said to accommodate a gentle giant named Stolem who sometimes visited the city and needed a place to sit! 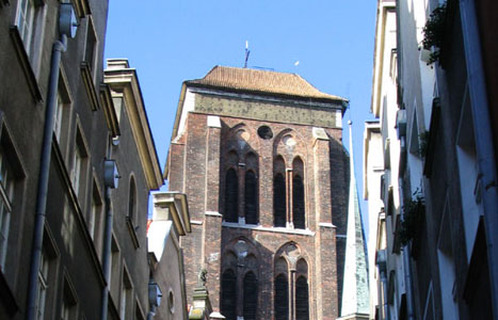 Inside the church is a polyptychic altar, built in 1511, depicting the Coronation of the Virgin. This work serves as the main altar, but there are many other priceless works throughout the church, many of which have had to be reconstructed due to damage sustained in the Second World War. The church also features a 46 chord organ, originally built in 1625, by the master Marcin Friese. On Friday nights, during the summer months, there are organ concerts in the evening, giving listeners a chance to truly immerse themselves in the Gothic experience.

The war damage inflicted upon the Church of St. John (Kosciol sw. Jana), which dates back to the fourteenth century, is still being repaired today. A late-Renaissance stone altar from 1599 stands in the church and the presbytery wall is strongly inclined vertically. The church is currently used as a concert hall. A charming little lane, one of the characteristic elements of sacral architecture in Gdansk, encircles the church, allowing a 360 degree view of the majestic building.

The Church of St. Nicholas (Kosciol sw. Mikolaja) was built between 1348 and 1390 on the site of an even older temple from the late twelfth century. The windows of the church are very large for such a big building built so long ago and give the building a unique appearance. The primarily Baroque and Rococo interior is completely original as this church was the only church to make it through WW2 unscathed. Framed with gold and highly decorative, most of the art inside the church depicts scenes from the life of Christ. There is also a magnificent chandelier crafted in 1617!

St Catherine's Church (Kosciol sw. Katarzyny), with its three aisles and its separated three-aisled presbytery, is probably the oldest sacred building in Gdansk. Old Slavic tombs from the tenth century can be seen in a crypt in the presbytery, although the church itself wasn't constructed until the fourteenth century. The massive tower of this church is topped with a "Polish type" dome and the interior of the church features 10 different types of vaulting. However, this church is more than just pleasing to the eyes, as there is a set of 49 bells which were reconstructed by both the German and Polish nations as part of the Unity and Friendship program they engaged in, to help heal relations between the one time enemies.

The Corpus Christi Church, built on the site of a hospital outside the old city walls, combines the modesty of the Gothic and the Baroque. The interior includes a late-Baroque main altar, an organ, and a painted ceiling which is, unfortunately, in very bad shape at the moment. A place to commemorate the Gdansk cemeteries that were destroyed during WW2 is planned next to the church.

The Franciscan Church of the Holy Trinity is a Gothic-style building with gables that separate the eastern reading room and the presbytery - a rarity in Polish buildings. Built between 1481 and 1514, the church is constructed from brick and contains many normal fixtures, including an organ, many brilliant statues and, since the building currently serves as a museum, numerous pieces of fine art. Perhaps the most famous piece of art housed within the church is the Gothic 'triptych of the Last Judgement', created by the Flemish Painter Hans Memling.

Finally, another Church of the Holy Trinity greets visitors who leave the Old Town and travel to Gdansk Oliwa. Commonly referred to as the Oliwa Cathedral, this post-Cistercian building houses a Rococo-style organ with 110 chords and over 7,800 organ-pipes. The organ is semi-elliptical and a host of angels with movable trumpets are situated on and about the instrument. Though the organ is certainly the most spectacular object in the cathedral, not a single space in the entire building is without an awe-inspiring statue, tomb, or painting.

A great article. However, it is a shame it misses out the Church of St Peter and St Paul, which is not far from the centre of the old town. As well as being shared between the Roamn Catholic and Armenian congragations, the church has some fascinating glimpses of Gdansk's past, including the graves of several Scottish merchants who became burgers of Gdansk during the 16th and 17th Century.