Born in 1927, in what was then the German Danzig, Gunter Grass became the voice for the generation of Germans who grew up during the reign of Nazism. His stated goal, the goal of all writers, was to provide 'mouth-to-ear' resuscitation for a humanity that would be lost without it. In 1999, Grass won the Nobel Prize for literature and is most known for his 1959 novel 'Blechtrommel' or 'The Tin Drum.'

Grass' father was German, while his mother was Kashubian (a distinct Slavic ethnic group from the region around Gdansk). As a young man, he was a member of the Hitler Youth and in 1945 he was wounded in the Second World War. After being released from an American POW camp, he worked in a potash mine and as a stonemason, before enrolling in art schools in Berlin and Dusseldorf. 'The Tin Drum' was actually his first novel and to this day it remains his defining work. It was the first part of the 'Danzig Trilogy' which was completed with 'Cat and Mouse' (1961) and 'Dog Years' (1963). Due to his personal experience and its historic legacy, Gdansk was the setting for these novels and his works are celebrated by Germans and Poles alike despite the tension and bitterness that still exists as a result of a debated history. 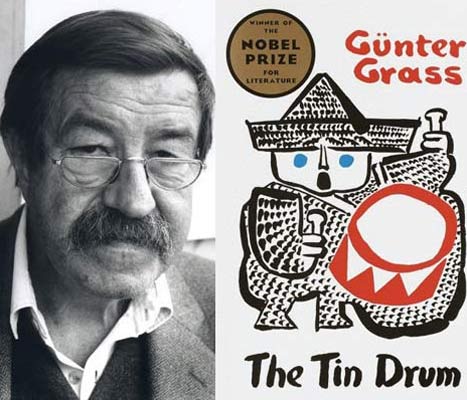 'The Tin Drum' tells the story of a young boy born in Danzig named Oskar, who, at the age of three, refuses to grow in protest of the adult world. Oskar communicates only through a tin drum, but through his eyes the reader becomes a part of the tumultuous world of Danzig/Gdansk in the 1940's.

Following the publication of a number of novels, plays, and poems, Grass became active in German politics as a ghostwriter for the Social Democrats and Willy Brandt. A collection of his political works entitled 'The Citizen and His Voice' is available for purchase. Grass made huge waves during the revolutions in 1989 and 1990 by opposing the unification of East and West Germany, maintaining that a unified Germany would become militant and threatening to world peace.

When he was awarded the Nobel Prize in 1999, his speech was one for the ages. Covering ground from Danzig to genetic engineering, our ancient ancestors to mass media, Grass held no punches. "I had the irreparable loss of my birthplace. If by telling tales I could not recapture a city both lost and destroyed, I could at least re-conjure it." Although references to Danzig and war were inspiring, Grass's comments on capitalist dogma and the hope that writers (or story tellers) were the only powers to check this force, were perhaps the most stunning. He spoke of the need for subversive, yet imaginative and thorough writing, for without it, the 'crush' of the worlds starving poor was inevitable.

Today, Grass is still active in politics, voicing his concern and shock at what is happening around him. He can often be found in Gdansk, as a guest at the university or for a presentation or premier of some sort. If you are travelling through Gdansk, make sure to make a stop in Gdansk Wrzeszcz, where you can visit the street where Grass was born (13 Lelewela Street) or have a seat on Grass's bench in Jozef Wybicki Square. A bronze representation of little Oskar and his drum will keep you company! Also, be sure to check out the new film 'Wrozby Kumaka' (Call of the Toad) which was based on one of Gunter Grass's novels. It was part of the XXX Gdynia Film Festival.

For more on Grass's confessed involvement with the SS and the surrounding controversy, click here.

There are those that immediately dismiss and criticize Grass for belonging to the Nazi party, while they support Washington's murderous and criminal foreign policies. A man that signs on for the U.S. military, kills in Iraq, and comes out a hero, what kind of nonsense is that? Are those that were drafted during the Viet Nam war on an equal footing with those that fought for Germany in WW2? And if not, why not?

Former SS members should have the good taste not to criticize Israel unless their self- esteem is so low that they need to make themselves feel better about what they did.

what a wonderful written poem! He's is putting the finger on the sore spot! I am for the Jews, but I am against the policies of israel. So.. do not immediately scream anti-Semitism please!! Peter Harrie

Will he ever be forgiven for being an SS soldier? Not by me.

Nobody asked you to forgive him. He was a kid, same age as my step-dad, Henry Wolnica from Ruda Slask. He escaped with the Underground aged 15 and eventually fought with the British army at Monte Cassino - still a kid. But others in Ruda were forced to fight in the Wehrmacht. It could have gone either way for both of them. Henry could have been Gunter and Gunter could have been Henry. Grass was no Nazi. Accept him for what he was - one of the 20th Century's greatest novelists whose work was dedicated to what's missing in the 21st Century - pacifism, socialism and humanism.

Oak Tree Fine Press is pleased to announce that the latest in our Nobel Lecture Series, To be Continued by Günter Grass is now available for you to order. This book incorporates the full text of the compelling and vivid lecture delivered to the Nobel Foundation following his acceptance of the Nobel Prize in Literature 1999. The book is published in an edition limited to 176 copies, with endpapers decorated with Rat Reading, an illustration by the author himself and specially chosen to highlight the content of the text. As with all our publications, all profits, from the sales of this book will go directly to organizations offering care and support to children made vulnerable by AIDS/HIV. Please visit our website http://www.oaktreefinepress.com for further details and to order your copy.

Gunter Grass is my writer favorite, your novel the tin drum is very beautiful. I like very much. The live of Oskar is interesting

I have just read Grass' 'Peeling the Onion' which I enjoyed immensely. My reading interests include the history of WWII particularly the reasons for for it. I was attracted to the 'Onion' because it was a biography of what you might refer to as a contemporary of mine, although Grass is a few years older than me. I was growing up as a boy in the UK during the years leading up to the start of the war, so the 'Onion' gave me some insight into what it was like for Grass at this time. His memories seem to be vague but the general mood seems to have been a population sleepwalking into disaster propelled by effective propaganda. This raises the question are we sleepwalking at the moment - globalistion, nuclear proliferation etc? There has been an outcry at his admission of being a member of the Waffen SS albeit not a very effective one. He doesn't appear to have fired a shot in anger from his Tiger tank. Thank you Herr Grass for a most enjoyable book. I shall now read 'The Tin Drum' again with the background knowledge provided by the 'Onion'. Peter.

Hi folks Greetings from madrid, Spain, Gunter Grass is a master of the european literature, I´ve read polemic novel "peelig the onion", a personnal autobiography and stunning pages when you´re reading this book, thanks Gunter in order to youur honesty ... you´re a master of the Arts