Though a rather brief and small battle in the grand scope of history, the story of the defense of the Polish post office during the invasion of Poland has grown into one of Gdansk's most cherished stories of heroism. Alongside the simultaneously occurring Battle of Westerplatte, the defense of the post stands as one of the first battles of the Second World War.

Following the Treaty of Versailles, the predominantly German city of Gdansk was made into a Free City, commonly referred to as the Free City of Danzig (the German name). The Free City was an autonomous city-state protected by the ill-fated League of Nations, with Poland retaining rather complex rights to Danzig, based mostly on economic cooperation. Though the population of Danzig was 95% German, Poland represented the Free City abroad, operated the railway system connecting it to Poland, and was given ward over Westerplatte, the small military outpost in the city harbor.

The Free City of Danzig had two post offices: one municipal and one Polish run. The Polish post office was considered an extraterritorial property of Poland, meaning it was exempt from local law in much the same way embassies or UN buildings are. As such, it became a sort of Polish headquarters within the Free City. As the situation between Poland and Germany worsened, the Polish military made the rather paltry effort of securing the post office by sending reserves sublieutenant Konrad Guderski to the post in April, 1939 to organize and train a security unit composed of official post office employees and civilian volunteers. In mid-August, as hostilities were beginning to seem imminent, 10 more employees were sent from Gdynia and Budgoszcz, bringing the staff of the Polish post office to somewhere near 100 people. On September 1, 1939, however, there were exactly 57 people in the building: Konrad Guderski (the only non-civilian), 42 local Polish employees, the 10 employees from Gdynia and Budgoszcz, and the building keeper, his wife and ten-year-old daughter who all lived in the building. 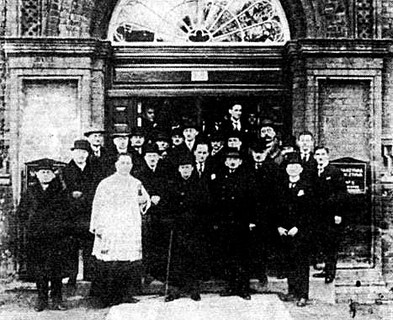 Above: The Polish Post Office in Gdansk as it was upon its opening in 1925.

At 04:00, Germans cut the power from the building and at 04:45, in sync with the Schleswig-Holstein's shelling of the small Polish garrison on Westerplatte, they began their assault on the Polish post office in Danzig. Armed with a small cache of mostly pistols, some machine guns and hand-grenades, the Polish defenders were able to repel the first German attack of the front of the building (though the Germans did enter the front door of the building briefly). At 11:00, the Germans were reinforced with 75mm artillery guns, but despite the extra firepower, the second German attack - through a wall in the side of the building - was also repulsed. Konrad Guderski, the Polish commander (if he can be called that), was killed during this second exchange.

At 15:00 the Germans called a ceasefire, demanding a Polish surrender. As the Polish post office employees - refusing surrender - holed up inside the building, the Germans received additional reinforcements to the tune of a 105mm artillery gun and a unit of combat engineers who spent the two-hour ceasefire diligently (and efficiently, of course) digging a trench under the building and equipping it with a 600kg explosive device. At 17:00, the device was detonated and the side wall of the building collapsed allowing the Germans to capture the entire building except for the basement. With the Poles holed up in the basement refusing surrender, at 18:00 the Germans brought automatic pumps, gas tanks and flamethrowers into the building [the squeamish should perhaps skip this passage...] and proceeded to flood the basement with burning gasoline. Five Poles burned to death before the rest evacuated the basement. The first two Poles to exit the building - waving white flags - were shot. The rest of the Polish defenders were allowed to surrender.

Sixteen Poles injured in the battle were sent to the city's hospital where six of them died (five from burn wounds, including the building-keeper's ten-year-old daughter). Though six people had managed to escape the building, two were captured the following day and sent with the other 28 survivors to Victoriaschule, a prison where they were interrogated and tortured along with many other Polish inhabitants of Danzig. All 38 survivors were put on trial, denied a defense lawyer and sentenced to death. They were executed by firing squad on October 5th.

Today, the story of the heroes of the Polish post office is often told as a means of demonizing the specialized SS troops who carried out an attack against harmless civilians, and has been mythologized to almost biblical proportions (think David and Goliath). The defenders of the Polish post office of Danzig are remembered with a monument commemorating their sacrifice in what is now Gdansk.

This siege has been immortalised in The Tin Drum, by Gunter Grass. I recommend the film of the book, in my book, one of the best book dramatisations of all time.

Excellent article about a little-known engagement at the start of WW2.

This horrific story is proof why any country should want to have the Poles as allies. Poles are stubborn, proud and incredibly brave. Too bad the Allies abandoned them to the Russians at the end of the Second World War. That act was unforgivable....

Thank you for the history, I visited in 1986 ould find no information in English this has been very informative.

"On September 1, 2007, however, there were exactly 57 people in the building" - thank you for the page, but please correct the date.

I am ashamed again and again what the germans did - I am nearly 52 but I cannot believe it yet!