Above: Poland's finest Left: Come rain, shine or snow! Below: The reindeer enjoy Christmas off By air Warsaw's Frederic Chopin Airport is…

Above: It's warmer underground! Below: Flash cars are an increasingly common sight in WarsawBy taxi If your Polish is up to it, or your driver…

Probably the best option available, most of them offer services in English. Rates are generally fair, though your home bank will probably charge you…

There's no getting away from it - Polish is a tough language, any early attempts at which will have you sounding like you're whispering, gargling and…

There can be few mottos more fitting than that of Poland's capital, 'contemnit procellas' - 'it defies the storms.' Although ransacked by invading… 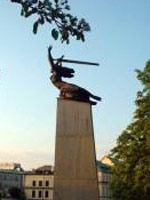 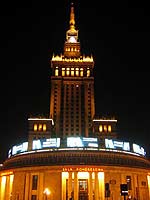 In the spring of 1928, the Austrian writer Stefan Zweig made a journey through Poland: "In Warsaw there was nothing to indicate that twice, three and four times victorious and vanquished armies had marched through the city. The cafes shone with elegant women. The trim and slender officers promenading through the streets seemed more like practised actors impersonating soldiers than like fighters. Everywhere one sensed activity, confidence and a justifiable pride in the new Republic of Poland which had risen so vigorously from the ashes of the centuries."

Barely a decade after Zweig's journey, Poland was plunged into further conflict. This time the damage was complete. Hardly a building was left standing and the human toll was unprecedented. The ensuing Soviet regime left a mixed legacy, with a painstakingly reconstructed Old Town, New Town and Royal Way, and a sprawling mish-mash of modern blocks. Thus what should one expect today from a visit to Warsaw - a destination that is often overshadowed by the more obvious charms of cities like Prague, Gdansk or Cracow?

One cannot understand the city without a great sense of loss. But defying all the odds, Warsaw is back. This is the dynamo of the country, and for today's young Poles, the past is the past, and Warsaw is where the future is being shaped.

On one hand Warsaw can be experienced as a rapidly developing modern city - a fizzing capital, centred around Marshal Street and Solidarity Avenue, where Poles come from far and wide to make their fortune. Warsaw is the business capital and where trends are set. It is also the academic centre of the country, and despite the venerable image of the Jagiellonian University in Cracow, Warsaw's is the country's leading university, and its offshoots, such as the School of Economics, are leaders in their fields. The lively student population numbers some 150,000 alone.

On the other hand, Warsaw is an immensely moving place to connect with the past. Its rebuilt city centre is at its most compelling in the Old Town with its proud Royal Castle. In addition, the former Jewish ghetto is a stark reminder of the unforgiving hand of history.

Further out there are a sprinkling of jewels to savour. These have fared much better than the landmarks in the city centre. The Lazienki park area, with its palaces and gardens, is a favourite with Poles and foreigners alike, as is Wilanow, often called Poland's Versailles.

Warsaw can be a frustrating city. But it is not without its rewards. Missing the capital means bypassing a city that is key to an understanding not only of Poland but of Europe itself. Whilst many love to hate it, there are plenty who love Warsaw for what it is. Today, having shaken off the cold war slumbers, Zweig's words are beginning to hold true once more. Warsaw again buzzes with activity - it has risen from the ashes.

its a really cool place

i like tha place,but i want to know if the warsaw university offers admission for masters degree with a student who has a third class at first degree

A great city, great museums, great architecture, nice walks in the old town, good and interesting food. Interesting Communist statues spread around the city. Good transport around the city on the trams and good value taxis. I have also been told that the night clubs and bars are very good. For a destination with a difference, outside the comfort zone of Western Europe Warsaw is a great destination, and you can easily move onto Krakow, Gdansk, Wroclaw or even out to other Eastern European countries with ease.

Warsaw is most beautiful city, one of the best and unusual in Europe. Trere are meny museums, which I visited during my stay in 2008. Web site is excellent. Best regards

Great website! Congratulations. I have heard about refform sex shop but I cannot find it on your map.

Hi thanks great guide maybe can you help in my quest to find an old polish friend that i have had contact with last in 1996 September.Any ideas to where and how to start to trace down a lost friend.kind regards

It's rare to find people smiling. And people stare a lot. You may consider it mean, but its only in their nature(some cultural thing,so don't take it personal. There's lots of neat buildings and restaurants.

Thanks so much for all the information! I'm considering coming to Warsaw in Fall'09 for a semester. Now I have 100% more motivation to write those scholarship essays. Hopefully see you all soon! I hope you are still hiring then ;)

the guilde is excellent it looks like a loverly city .we that is my two brothers and sister are coming to warsaw at whitson. i would like to find records for my jewish polish family. birth marriages and deaths please can you give me the adress kind regards linda.