Echoes of an Elegance Age

Warsaw's New Town has in fact existed for some six hundred years. It was initially established to curb the unchecked growth that had snowballed beyond the city walls. Hence the new town, founded in 1402, was given its own charter and corporation along the lines of its elder brother. A market square and town hall were built and a number of churches and monasteries sprung up.

The New Town was merged with the rest of the city in 1791. Up until the mid-eighteenth century, the majority of the dwellings were still made of wood, but this changed rapidly over the ensuing era. 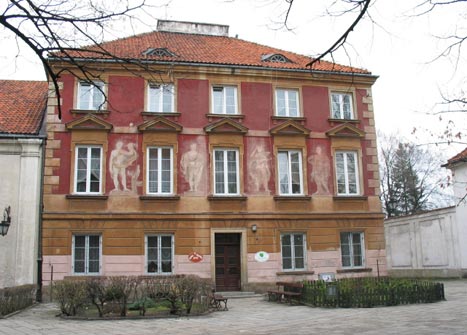 This was indeed an age of elegance and the New Town became one of the most gracious areas in the city. The district already had some fine palaces and churches, and these were now complimented with townhouses in the neo-classical style. Travellers had previously noted the extremes of splendour and poverty that jostled side by side in Warsaw. But by the 1780's the city had been transformed. Streets were well paved and lit - a German traveller noted that he 'found the sort of cleanliness one only meets with in the most refined cities of civilized Europe'. A complete renaissance in the arts made Warsaw's salons amongst the liveliest in Europe.

Today one can still enter the district through a fragment of the Old Town's medieval fortifications. The New Town was almost obliterated during the war, but it was rebuilt to emulate its heyday at the beginning of the nineteenth century. Like the Old Town, the streets here have been pedestrianized. This makes the area a pleasant place to stroll about in, and a good smattering of shops and restaurants have brought colour back to this ancient district.