Wilanow - The Legacy of a Warrior King

The palace of Wilanow, often referred to as the 'Polish Versailles', makes for a very fine day out. It lies just a few miles south of the city centre, and it draws a neat conclusion to the historic Royal Way.

Wilanow, 'Villa Nuova' , was the pet project of King Jan Sobieski (r.1674-96), one of Poland's most dashing monarchs. His fame in the West lies chiefly on having rescued Vienna from the Turks in 1683 - an event that has since passed into legend. 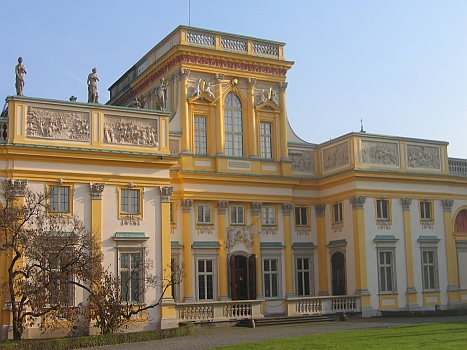 On several levels the comparison between Wilanow and Versailles is not unhelpful. Both Louis XIV and Jan Sobieski were mighty Catholic monarchs who bestrode their age and later assumed a mythic status that is almost unrivalled by other French or Polish kings. Both palaces were built at almost exactly the same time, in the baroque style, and both were created to be near to yet resolutely outside of their capitals.

But there the similarities end. Louis XIV, the 'Sun King', was an absolute monarch and his palace at Versailles was a very public edifice - a formidable power statement of his divine right and an arena in which to keep the nobility in check. The vastness of his palace - a kingdom in itself - is on an entirely different plain to Wilanow.

Sobieski, on the other hand, was an elected monarch. And although he was fond of the idea of a dynastic legacy, he was not ruthless in the pursuit of those aims. His palace at Wilanow was a largely private venture, a majestic but homely retreat for his family, shorn of the endless protocol that Louis was so keen to enforce at Versailles.

Wilanow was passed down through several of Poland's aristocratic clans following Sobieski's era. It was still privately owned as late as 1939, although part of the palace had by then opened as a museum. Thankfully, both the palace and its contents came through the war largely intact. As a result it is one of the finest places to visit in Warsaw. Its art collections are outstanding, and a very pleasant afternoon can be spent wandering about the gardens. There is also a rather special museum of poster art (a milieu in which Poland has achieved some renown) that is well worth a look.