In the Autumn of 1940, precisely a year after their invasion of Poland, the Nazis created a ghetto for the Jews of Warsaw and its environs. The area chosen, Muranow, was in the north west of the city, and up until that time it had housed 240,000 Jews and 80,000 Christians. On October 10th the Christians were given an order of eviction, and a month later the ghetto was sealed off by a wall. By March 1941, as many as 445,000 Jews were living in the ghetto, and conditions deteriorated rapidly.

In the Summer of 1942 265,000 Jews were sent to Treblinka from the infamous Umschlagplatz. The vast majority were to die in the gas chambers. These sudden evictions, coupled with the news of Nazi crimes which were filtering in through the underground, laid the foundations for the Ghetto Uprising, which began in earnest in April 1943. The conflict saw appalling scenes of devastation and the further slaughter of some 55, 000 Jews. After the area had been liquidated in May 1943, the entire ghetto was razed to the ground. 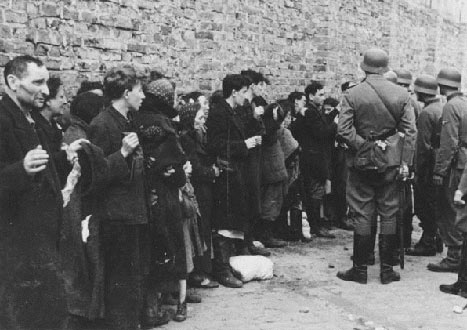 Today there are few echoes of Muranow as it was in the 1930's. The wasteland of the ghetto was rebuilt in standard Soviet blocks - it is a stark area. Nevertheless, amidst this cold landscape there are a number of landmarks of great importance. A small stretch of the ghetto wall can be found on Sienna street, a chilling reminder of the occupation. Astonishingly, the Nozyk Synagogue, which stood nearby on the south eastern fringe of the ghetto, came through war. It was used by the Nazis as a warehouse, and it is the only synagogue in Warsaw to have survived the war intact.

Several memorials can also be found in the area. A path of remembrance leads off Zamenhofa street to the Monument to the Ghetto Heroes. For historical insight, the the Institute of Jewish History remains the focal point of the area. As well as chronicling the experience of the Warsaw ghetto, it also sheds light on the full expanse of the Jewish tragedy.

The article doesn't say what nationality those Nazis were. Can anyone help me because I do n't know?

"The Nazis created a ghetto for the Jews of Warsaw"... Who is this NAZIS?????

I Recommend "Shoah" A Film, By Claude Lanzmann. It Details, Through Interviews, The Extermination Of The Of the European Jews, And the Warsaw Ghetto, Any Student Of This Subject Should see this Film, On DVD.

In Sweden we read about the Second World War for about 200 hours. But I know that a lot of people world-wide know nothing about it. And thats pretty sad! We need to retell this story so it doesnt happens again.. right?

I didnt read this it was so bad

this is very help full its me and my fellow student austin . we will get a 100 thanks

One day I wish to visit Poland, the country where my family came from in the 1880s and Warsaw where I had relatives brutally murdered by the Nazis

i think you should have more stuff about the things they had inside a ghetto and u should describe the people in more detail, the "jewish" people.

great picture got a lot of information

THis is so sick

dude, shut up this site is awesome btw thx for the info!

yeah, not helping that much...

helped with my research paper

thanks this helped me with my project

hey hey this information was rad - it really hepled me- i think the holocaust is pretty amazing stuff- really sad stuff. i watched a film in social studies called- Night and Fog it was all real footage and it really put things in perspective- even though it was german/french (idk) subtitles, it was still real interesting- i'd totally give it a top rating. also shindlers list is good- the devils arithmatic is a great movie with kirsten dunst in it. the boy in stripped pj's is really x100 SAD! i cried so much :( thanks for the info !! THANKYOU!!!

This Imformation Is Cool =)it helped me for my social studies =)

with a few detail changes, this could have been a discription of gaza today.

this site really had alot of imformation for my sons research paper.

Excellent, informative and touching site. Thank you for making it.

People slaughtering people...seems it never will end. And that silly, evil religion -- Popes, cathedrals, churches, rosaries and "whathaveyou" junk --stands by stupidly appraising the damage they have done. What a cruel joke on humanity.

It gave me about 2 facts of what I was looking for, but that's okay I need as much as I can get! Thanks!

Its a shame that so many should be so rude when someone spends so much time to bring you info on a time that was so hurting to so many good people who had to die !

thanks for the info, ill be very useful on my reasarch project, i give u guys crdit!!

they went through alot. i feel so bad for them.i hope we dont go throught that what they have been therough!!!!

yay that was really good. THANKS!

Hey people with all those "Oh, not enought facts" comments. I bet you couldn't make a better web page than this. Maybe if you actually look at the more into the this site, you could find lots of facts. Otherwise... go to some Opinion Enyclopedia and search it there. Superb job on this page Warsaw Members!!!

The Story is interesting but sad!!!

do u think this could happen in the world again ???

it wasn't what i was looking for but i got something out of it.

It was great info for my project.. But it could've been a little more descriptive about the overall ghetto!!

Great, thanks! Just what I needed for my project! Information about this seems to be hard to find elsewhere. join the cc

Thanks...But this really didn't help me at all! There was not enough information about the OVERALL ghetto!

helped a lot with my project yeaa for me :D

It was good but not enough info for my project...

Good info, helped a lot with my history project thanks... (Go Red Sox!)

It was interesting to learn a little more background on the gas chambers and the Jewish ghettos...this information will help alot on my project...

this was okay; could've had more information on the highlights of going there today--what you'd see and stuff. thanks anyways it did help a tad :)

this is a good site

thank you for the good information.

Hi, can you add a map of the Warsaw ghetto? Thank you so much for the info. Nice site.

This was an interesting thing. It helped some.

thanks, helped me out with my WW2 research

Thanks for the info, Loved it. Helped a lot with my history project