Travel - Getting to Warsaw 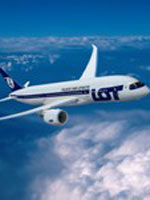 Above: Poland's finest Left: Come rain, shine or snow! Below: The reindeer enjoy Christmas off 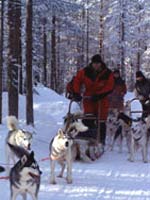 All the major airlines fly to Warsaw, and since 2003 the city was also served by budget carriers. However, since the airport has been charging more to fly out of the main terminal only Wizz Air, Germanwings and Norwegian Air Shuttle remain. Following the closure of the ghastly Etiuda terminal in March 2009 - the temporary terminal from which low-cost carriers used to depart - Terminal 1 took over cheap-flight departure duties.

When booking with a regular airline, make sure you spend at least a weekend in Poland, otherwise you'll face the hefty business rate. The flight from most UK airports takes around two-and-a-half hours. If you plan to fly during the winter, be prepared for delays due to fog or ice, or the occasional impromptu diversion. 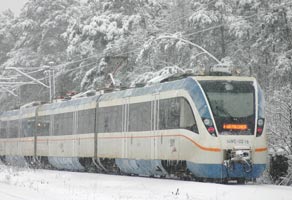 If you're a romantic sort and decide to come to Warsaw by rail you won't be disappointed. The Polish rail system is stuck in a mid-twentieth century time warp with the trains travelling at a wonderful leisurely pace. In summer this allows you to open the windows, smell the rural smells and watch the countryside pass lazily by. But the dream will end with your arrival at Warsaw's main station (Warszawa Centralna). The underground concourse hasn't changed in a decade and looks and feels like the set of a post-apocalyptic sci-fi movie, complete with some of the characters. The only advantage it has is that it's slap in the city centre and, once you've negotiated the network of tunnels and found your way out, it's easy to get anywhere else on the buses and trams. But be sure to keep a close eye on your luggage when you're anywhere in the station.

You may not be over-endeared of the thought of 24 hours in a bus from London to Warsaw, but it is actually not too bad - no smoking is allowed aboard the comfortable buses, and Poles, as ever, are impeccably behaved. For around 60GBP (USD 100) return to London, it can't be beaten. Internal trips, on the other hand, are normally aboard old buses with a distinctly retro feel. Good in small doses.

Travelling to Warsaw from the UK by car is not the epic journey you might think it is. The whole trip takes about 24 hours if you drive non-stop from Calais, but if you take it easy and sleep at night, you'll be in Warsaw in two days or so. But look out for the Polish roads. About half of the main drag to Warsaw is pristine 'autostrada' (for which you'll have to pay), but the rest is still single file traffic, and the road surface can be pretty poor in places. Once you're in Warsaw, the road signs are a bit confusing and you need to keep a sharp eye out for pedestrians and have your wits about you at all times as the traffic moves very fast. Ensure you have your registration and insurance documents with you at all times, as well as your passport and driving licence. Spot checks on vehicles by grim-faced police are common.

So, if you want to give it a go (and why not?) you can check timetables courtesy of the Polish Rail Network (PKP) Just remember to use the Polish spellings (i.e. Krakow for Cracow, Warszawa for Warsaw). Watch the landmass of Europe slip past, as you are treated to Hollywood movies dubbed into Polish (one actor plays all the voices, men and women alike).

Once across the channel head up the coast to Belgium, then into the Netherlands and, before you know it, you'll be in Germany, speeding comfortably along the autobahns. And once you've got to the E30, just west of Hannover, it's plane sailing straight through to Warsaw. Overtaking can be difficult in a right-hand drive car, so best not to bother. Navigation in the city is actually very easy as there aren't a vast number of main streets. Once you've figured them out you'll be fine.

Any information about bus relation from Warsaw to Belgrade?? Please write on my mail dress

Hey! I am ethnically Polish from: Polesie - Brzesc Litewskie nad Bugiem & Gay. Presently, I work @ The Hospital of the University of Pennsylvania, in Philadelphia, PA, & plan on travelling once more to Warszawa.I want to explore the Gay Life, in depth, as much as possible. I also plan on doing my advanced studies in Nursing @ the University of Warsaw. I enjoy the "arts & sciences," besides going dancing, eating, & coffee drinking. I do exercise: cycling, running, & swimming. Reading books & "the newspaper" are fundamental, whenever I get the chance. I enjoyed: The New York Times Sunday Travel Section, especially when it highlighted Poland & Warszawa. I can be reached @ Grafvonrosenberg@aol.com &/or called @ USA: (732) 485 - 5468. I love Poland, what it has to offer - life is GREAT!!!!! :-)

Hey! I am ethnically Polish from: Polesie - Brzesc Litewskie nad Bugiem & Gay. Presently, I work @ The Hospital of the University of Pennsylvania, in Philadelphia, PA, & plan on travelling once more to Warszawa.I want to explore the Gay Life, in depth, as much as possible. I also plan on doing my advanced studies in Nursing @ the University of Warsaw. I enjoy the "arts & sciences," besides going dancing, eating, & coffee drinking. I do exercise: cycling, running, & swimming. Reading books & "the newspaper" is fundamental, whenever I get the chance. I enjoyed: The New York Times Sunday Travel Section, especially when it highlighted Poland & Warszawa. I can be reached @ Grafvonrosenberg@aol.com &/or called @ USA: (732) 485 - 5468. I love Poland, what it has to offer - life is GREAT!!!!! :-)

i onyiefrank i was just going through my computer i saw your site it was cool and fine i don't how i feel. pls i will like to poland to see by myself what i saw in your pls even due is just 3weeks.pls i will like if your organsation can help in getting initation letter i will glad.is nice city to stay both for studies and other things.

i like this site so much,please i will like to visit poland,particularly warsaw,i will like if your organisation can help me in getting an invitation letter,and the cost of it

You are right, Poland is a great destination.At any season of the year, there is something to do.Now, the best is Zakopane and around for ski activities.Snowfall is great and ski conditions very good.Later i the year, Cracow, Torun, Wroclaw, Zakopane are good to be visited for trekking, sightseeing , touristic and historic visits.Hope for you that you will come back to Poland and Zakopane for longer time next time.If Zakopane is your next destination, do feel free to contact me by replying to this review to get advices on accomodation and activities.

We traveled cheap with Wizz Airline to the Warsaw airport. It was a great weekend destination, even in cold January.

how much would it cost to tavel from poland to saudi arabia.i will like to get my reply now because i will booking today,and i w3ant to get all the detain today!

Nice to know the info about London to Warsaw return bus ticket - but anyone know if you can buy a single from Warsaw to London?

Can somebody please tell me is there connection from Belgrade to Warsaw by bus or train?

I need information is there a bus from Belgrade(Serbia) to Warsaw and from Warsaw to Belgrade? Please write me on my mail. Thanks

wouls like to take train or bus, paris warsaw, and a guided tour od warsaw and krakow, (*cancwentrations camops visits). with horwl satys

Dear Sir or Madam, I am planning to visit your great countrys beautiful cities are Warsaw, Krakow etc during the 1st of June, 2009 until 20th of June, 2009 with our family members and some of my business friends/total 10 people/. Also I am very kindly relationship with Poland Ambassador in Mongolia. Therefore we need the detailed schedule for travel around cities as Warsaw, Krakow etc. And we would like to make an agreement with you according with travel plan, price, services etc. About hotel book, we will organize our self. I am looking forward to receive our requested information from you. With kind regards from Mongolia, Mr.Enkhbat. Erdenebaatar.

Irene, here is what is written on the airport web site: We would like to inform you that Etiuda Terminal is due to be closed on the night of 28 March, 2009.

Does anyone have any further info on the date of closure of etudia terminal??? I am hoping that it will be before 25th April

There are trains daily between Warsaw and other European cities. I suggest checking the Polish railways website for timetables: http://rozklad-pkp.pl/?q=en/node/143

is there frequent trains from warsaw to berlin,paris and other european cities. wat will be the timing if yes?

Julia, I noticed that trains that are late are usually REALLLYYY late. Usually they're on time though!

Every train that I travelled on during my two weeks in Poland were on time!!!! Was that just luck or are they always that good? The inter-city trains were fine but some of the more local and rural trains were awful. All added to the excitement of travelling in an unknown land.