There can be few mottos more fitting than that of Poland's capital, 'contemnit procellas' - 'it defies the storms.' Although ransacked by invading armies on many occasions, the city has always risen, phoenix-like from the ashes. The worst blow to the city, however, was reserved for the last World War, and there was little left but ruins on its liberation in January 1945. But rise it did - and Warsaw is again the bold and energetic capital of a resurgent Poland.

Warsaw's was not a gradual rise to prominence. Rather, like the Spanish capital of Madrid, it owes its ascendancy to geographical location. Poland's union with Lithuania in 1569 rendered Cracow somewhat out on a limb, and it was hence decreed that Royal elections were to be held at Warsaw, which lay at the centre of the two realms. The entire mass of the gentry were enfranchised by this system (an early example of democracy in Europe), and this meant that some 50,000 rumbustious souls descended on the city for each interregnum.

This in itself served as a major trigger for the small city on the River Vistula, which had numbered only 4,000 inhabitants in 1400. The renovation of the castle for His Highness, followed by the arrival of a smattering of palaces for the nobility, brought splendour to Warsaw, and in 1596 it was officially declared the capital.

The great magnates, who were the real powermongers, set up their own private districts in the city, with magnificent palaces to match. Growth was quick, yet disaster came in 1648 when the Swedes ransacked the capital. Revival was impeded by a general stagnation of life in the Commonwealth, yet a renaissance did come with the reign of Poland's last king, the enlightened Stanislas Poniatowski (1764-1795).

During Poniatowski's reign, Warsaw's population grew from 30,000 to 150,000. The transmission of Enlightenment values, coupled with an elegant programme of public building, propelled Warsaw's status to amongst the finest of European capitals. However, uneasy neighbours conspired to break Poland's revival and for the majority of the next century Warsaw lived under Russian rule. Two major uprisings in 1831 and 1863 sent a signal to the rest of the world that Polish spirits had not been dimmed.

After a brief spell of independence following the First World War, Poland was again thrown into conflict in 1939. The tragedy was unrelenting. Over half of the city's population perished, including the majority of Warsaw's Jews. The capital itself was annihilated in the wake of the Warsaw Uprising.

The ensuing reign of a Soviet-backed government was to leave a troubled legacy. The old core was rebuilt, but there were gaping holes in the cohesion of the whole. Day to day life in Warsaw in that era was most poignantly captured in Krzysztof Kieslowski's series of ten short films, Dekalog.

With the triumph of Lech Walesa's Solidarity movement, which was brought to a head by the famous Round Table Talks, a new era dawned for Warsaw. The ageing President of the government in exile, which had remained in London since 1942, returned the insignia of state to Walesa in a ceremony at the newly rebuilt Royal Castle.

Since the early 1990s, Warsaw has become a vast centre of business and culture for the country, with skyscrapers and other modern buildings rising non-stop, and a vibrant heart whose unceasing pumping keeps the blood of the nation flowing all throughout Poland. 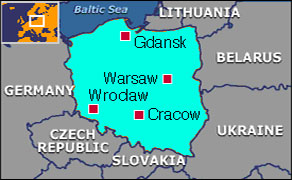 Positioned at the centre of Europe, this country has known turbulent and violent, as well as very prosperous times. There have been periods of independence as well as ones of domination by other nations. Several million Polish people, half of them Jews, died in World War II.

In 1989 Poland became the very first of the eastern European countries to overthrow Communist rule, following years of strikes and underground political movement led by the Trades Union movement Solidarity. In spite of strong Russian objections, Poland joined Nato in 1999 and eventually joined the EU in 2004.

Poland has achieved some success in creating a market economy and attracting foreign investors. However, unemployment is high, with incomes and growth low. The huge farming sector is unwieldy and inefficient, many farms still retaining their medieval land divisions into long strips. In spite of this, Poland's agricultural output is actually greater than that of Great Britain, France and Italy combined, which is why future EU subsidy levels have been a major area of political friction. Corruption has been singled out by the European Commission as a particularly irksome problem which must be urgently addressed, as well as the necessity to improve border control.

The Roman Catholic church, a strong force in Polish life, has expressed concern that modern lifestyles are corrupting moral values. The church has been involved in heated debates over issues such as worship in schools and abortion.

its so asom at poland

hi, i study english in warsow(Poland):) i wanna improve my language and that,s why i,m looking for some native speaker who is able to teach me something. I can teach her or him Polish, please help

iv been in poland it's so butiful

I am trying to locate the Polish source for Regal Dynasty European Chocolate' Walgreen's no longer stocks this item.

Hello I had the opportunity to visit poland this year and i was really impressed with its beautiful cities..its architecture..I visited Gdansk, a wonderful city full of history and art..Leba, another impressive geographical location, Chmielno lakes (where i stayed at the hotel). People ar ereally nice, friendly, simple ones..and food was really good.I work on aculinary project with my students and i would like to learn more about polish cuisine. My mail is here..if anyone can help me . The next week i will go again to Gdansk..so...see u soon Poland. This page was useful for me..

I want to know about the addmission procedour of hotal management such as fee structure; required band of IELTS;and other nessecessery thing

I need to talk to someone in poland warsaw

I was meloncoly when i visited poland andrew is frustrated

I LIVED IN POLAND FOR 10 YRS. POLAND IS SO BEATIFUL! DONT LISTEN TO PEOPLE SAYING IT IS POOR OR UGLY IT IS NOT TRUE!

Warsaw is definitely a place to see not just because it's the capitol of Poland but because of it's history. I've lived in Poland for 9 years and "Henry" must have been to all the wrong places. Unfortunately he must not have been in many other countries if he thinks that the most populated state will be cheap, esp. the capitol. If anyone want's to visit Poland I hope you visit Krakow and Zakopane which are my two favorite places.

i think info great but no regions

this page is insteresting and very help ful but could anyone tell me the geography of warsaw? (mountains, rivers ect.) but still this is a pretty ok website to find stuff!

Warsaw. a place to be.Please, How do i get to warsaw from Nigeria.Tell me how to go about it.Thanks

I think possibly the gentleman below "Henry" is not a great traveller. A lonely planet guide would've solved his issues. 10 years ago Henry you would've been correct... NOW Warsaw actually is a very decent place, in general it's a bit boring with cultural events BUT people, restaurants and clubs you certainly wouldn't run out of very nice options during a 1 week stay. I have quite a bit of experience as I lived in Warsaw 8 years, I'm originally from NYC, lived in London and Moscow, and I've travelled quite extensively throughout Europe and Asia. It IS worth a see. A good analogy is Italy; everyone really wants to see Rome, but if you end up in Milan it's quite interesting and nice to see. Poland's Rome will always be Krakow, but Warsaw in the last few years has now become quite interesting and nice to see.

hello,are there anyone who could give me the name from daughters of Jan Wedel who is the boss of E.Wedel manufacturing chocolat on Warsawa

I'd like to ask henry if it was his first time out of ireland, cause his comments could fit with any big european capital. btw, the food is really good and the people very nice! moreover there are very good clubs with great music taste.

I would like information on the International Universities in Warsaw, and the requirements and the tuition fees.Im currently living in Germany and i come from Zimbabwe. thank you

It should say the populatoin

i think its really interesting what had happend to them and i wish i could go back in time to save some of them and tell them how to escape because ive researched it at school and online. but then if i do that ill mess up history

Do not visit this place 'warsaw'!! It's very expensive and everyone tries to rip you off. Most places don't even consider giving you back your change. Could not find one nice place to eat and you get charged for using toilets and hanging your coat up in some 'eating houses'. Worst City I ever visited and was glad to get back home, first time ever for that.

Great great site!!! best from all cities that has a virtual guide! Do you have any info on the Yiddish theater? (Ida Kaminszka institute?) scedual or contact #. thanks for all the great info.

Well I Love The Site. Needs More Information On Witch Drowning. That sounds interesting, but nothing is giveing me clues to what it is.

I liked it it was good

It is really a beautiful place. I m not Polish but i loved it, the people, food, culture, history and nightlife warsaw and everywhere in poland is breath taking. You will not be able to stay away!