This gargantuan, Gotham City-like tower shoots up from the centre of Warsaw. Raised after the Second World War during the era of Soviet domination, it remains one of the most controversial buildings in Poland, and it was only a whisker away from being pulled down when the Berlin Wall fell in '89.

Built between 1952 and 1955 as Joseph Stalin's "gift" to Warsaw, it was to resemble the Seven Sisters of Moscow, although to frustrated Varsovians it merely resembled the ugly reality of Soviet domination. After the "thaw" of 1956, the name of the building dropped Stalin's moniker and became merely the Palace of Culture and Science (Palac Kultury i Nauki), though it was occasionally referred to as "Peking" (from the Polish abbreviation, PKiN).

Today, the Palace of Culture (Palac Kultury) still stands as the tallest structure in the city, as well as in all of Poland. With 42 floors and over 234 metres (with 43 metres of spire alone), this epic still has the upper hand on all of its modern neighbours. At the moment, the building serves as an exhibition hall and office complex, as well as an FM and television broadcasting centre and cinema, theatre, museum, bookshop, and conference hall fitting 3,000 people. 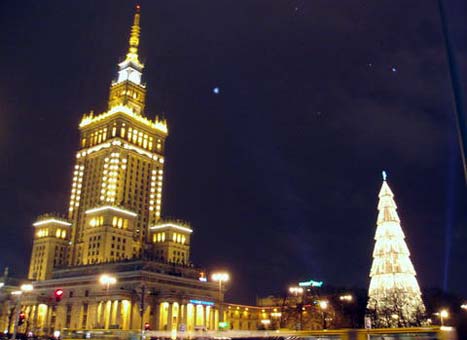 Perhaps the highlight of the Palace of Culture for tourists is its observation deck on the 30th floor, from which you can see the whole city and the Vistula on a clear day. An old joke goes that the best views of Warsaw are available from the building - it's the only place in the city from where it could not be seen. In case you're having difficulty finding this megalith on Marshal Street (don't know how you could!) try asking for Plac Defilad (Plahts deh-FEE-lahd) - the largest square in Europe.

I visited Warsaw in the 1960s. Polish people generally hated the communist symbolism of the Palace of Culture. It could be seen from every part of the city and the prominent red star on the summit ensured it was also apparent at night. Whatever, the Polish nation survived the Nazi oppression and the Soviet domination. We were told then that the freedom of their Roman Catholic Church was the only thing they would fight for again.

We love our Pałac Kultury! Who wrote this bull***?

I live in Warsaw not far away. I go there nearly every day.

I actually love this building! Looks totally amazing standing there in the centre of the city - and a great way to orientate oneself whilst walking around. All it needs is a bit of care and attention; and most of all - that large open area all around needs to be fixed up, landscaped and properly paved. Then it would be a perfect area for concerts and other big public events. At the moment its all a bit rundown (though to be fair, has improved a lot since Euro 2012)

again another "must see" location in poland.. either in summer or the coldest winter.. the sight both day and nite is 2nd t none.. imagine big ben on steroids and ur half way there.. :D warsaw (waszawa) is a great place t go for jus about everything.. shoppin.. socialisin and sight seein.. a must for any traveler.. :D

I have visited Poland....i was in a theatrical team and we have played the "helios the heliatoras" of Elytis! It was great!

come on facebook join the cause to save the palace of culture.

this is the most exciting bulding in warsaw. both inside and out this building is breath taking. and the viewing platform shows you the beauty of warsaw. we go to the building every year as warsaw is our holiday destination. also make sure you have a coffee from cafe superb.

in google i wrote ,,palace of culture and science'' not other tower!

Warsaw is a dirty place (dogs shits on grass everywhere) I prefere Gdynia.

I think you need to stop seeing the Palace of Culture as a symbol of Communism. It really is an amazing piece of architecture irrespective of who built it or for what reason. It houses theatres, great cinema, bars, clubs and huge concert hall and is in no way out of place in post-communist Poland!

i went up this tower a few years back. The displays inside were just awful and tacky but this is a beautiful building. It wouldnt look out of place in New York. I live in the north of England and nothing we've built since the 1930's looks this nice

Poland, with the help of some private investors from other countries (including the U.S.) should erect (no pun intended) a building twice as massive and profound as that of this building. It should be erected right next to this one. Then, we will see "Stalin's Penis" shrivel up and become just another memory, which is where Stalin deserves to be and remain. Any government that suppresses and abuses groups of people is a government that needs to be destroyed and replaced. PERIOD!

yeah, i thought it was a reasonably good thing after all we are the step cousins of sin. stalin in my mind was not just a dictator but a powerful role model and showed great leadership. thanks

I have often been to Warsaw and never get tired of seeing this amazing building.OK To be sure it not to everyone's taste. Tt is a lasting legacy of post-war poland and the reconstruction of Warsaw. If Poland ever wins the Eurovision song contest , then I am sure it will be televised from here

It is one of the prettiest buildings in Warsaw and everyone hates it and they're discussing destroying it -- even though it's probably the most photographed building AND on all the postcards in Warsaw. There's so much going on in the palace also, there's no point to destroy it. It may be a symbol of communism and mistreatment, but it is history still.

The best building in Warsaw by a LONG WAY! If they could just clear up the area around it (it is full of scruffy hamburger stalls and the like) it could be the real icon of the city. Shame the city elders don't see it that way, but I can understand their point too.... Apparently the city's finest brothel is located on one of the upper floors, but what would I know about that?

Maybe it's because i'm not Polish, but i'm gonna be contraversial and state that i actually like the Palace of Science and Culture. Better looking than the average skyscraper in Warsaw, that's for sure!