In September 1939 the Germans took control of Poland and Warsaw after a three week siege. There was no love lost between the Germans and the Poles and it soon became clear that the Nazis, considering themselves a 'Master Race', valued Polish life at next to nothing. As was later demonstrated, on an unprecedented scale, this was one step up from the value they put on Jewish life.

As early as November 1939 in Warsaw the first decrees intended to denigrate the Jewish people were issued by the Nazis - the most notable of which was that all Jews over the age of twelve years were forced to identify themselves by wearing a Star of David on their sleeve. These first measures were just the start of a long process however, and with more edicts issued every month it wasn't long before the Jews were reduced to the status of slaves and chattel. They were forbidden to work in either key industries or government institutions, to bake bread, to earn more than 500 zloty a month, to travel by train or trolley-bus, to leave the city limits without special permits, to possess gold or jewellery, plus all Jewish shops and enterprises had also to be marked with the Star of David. In addition to these official oppressions, Jews were summarily humiliated, beaten or even executed for little or spurious reason. In short they lived their lives in a state of constant fear.

Plans for a Jewish ghetto had in fact existed since the beginning of the Nazi occupation of Warsaw, but in October 1940 they finally began to take form. A small district South West of the Old Town, in the centre of the city, was chosen and 113,000 Poles were evacuated to make way for Warsaw's 400,000 Jews. Thirty percent of the city's population were now living in an area that constituted less than three square miles, or 2.4 % of the capital. In November that area was closed off by a formidable wall, topped with barbed wire. 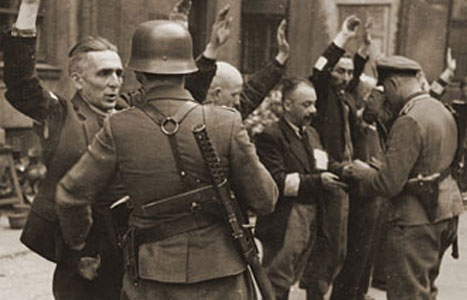 Life in the ghetto started off tough and quickly got worse. At first some semblance of normal life presided: cafes were still open, newspapers published (newspapers from 'the outside' were forbidden), school lessons took place and people strived to continual a normal existence as best as they could. Those who had managed to hold on to any of their wealth in particular were able to live in a small degree of comfort. Smuggling food into the ghetto was common, either by bribing guards at the gates, or carrying it in via underground canals - whilst poorer people would send their children over to the 'Aryan side' to steal what they could. The official food ration of around 200 calories a day per person was less than 10 percent of the ration for Germans (and about 25% of the ration for Poles).

As more and more Jews were brought in from the neighbouring towns and villages, conditions became yet more cramped. Money for bribes was drying out (and was only ever the privilege of a few) and the poor people of the ghetto, skeletal and wretched, began starving en masse. In addition to death by starvation a typhoid epic, caused by the poor sanitary conditions, broke out; meaning that by April 1941 the mortality rate in the ghetto was a staggering six thousand people per month. Funeral carts would come and collect the bodies every morning, between 4-5am; mostly the corpses were dumped naked on the streets - the families were forced to strip their relatives in order to sell the clothes.

Whilst the Jews in the ghetto were dying, they weren't dying quickly enough as far as Berlin was concerned. Hitler's original plans to ship all European Jews to Africa were proved impractical, and so it was that the chilling 'Final Solution' was decided upon, early in 1942. Between July and September of that year 300,000 ghetto Jews were transported to the Treblinka Extermination Camp, in the Nazis first mass deportation effort. At first few believed, including the Jews themselves, that the rumours of these death camps were real - preferring to believe that they being sent to hard labour camps. Eventually the evidence that was fed back (by escapees from the camps and by various secret agents and journalists) became irrefutable. The 60,000 remaining occupants of the ghetto had no choice but to confront the awful truth.

When the Nazis prepared to organise a second deportation to Treblinka in 1943 the Warsaw Ghetto Uprising began.

* Several survivors of the ghetto are still alive today. And out of respect to all the internees of the ghetto, we kindly ask that reviewers write only essential comments. Thank you.

This article on the Warsaw Ghetto is meant to be an informative introduction to Warsaw's history for travellers, and is not meant to be used for academic research. Please do not use it for any academic papers, but instead refer to published academic works and textbooks.*

this pulled my heart strings... SO SAD POOR PEOPLES!!

I love this article

that is so sad .I don`t want to belive it but it`s true

I want an example about life in the ghetto

May I suggest the book "The Warsaw ghetto" by Sir Alistair Cooke.

i suggest milkweed by jerry spinelli

The man in the photo with the mustache was my uncle, Bernard Ryzak.

That is so cool!

Please read "Tunnel, Smuggle and Collect: A Holocaust Boy." The author of this true story donates all royalties to Holocaust education. 100%

helpful for a school project

Very useful for my school project. Thanks!!!

its just unfair what they are doing to the Jews

It is old but it is beautiful, and its colors they are fine It was worn at Derry, Aughrim, Enniskillen and the Boyne. My father wore it as a youth in bygone days of yore, And on the 12th I love to wear the sash my father wore.

Ewan and Chris come straight to my office before break!

Helpful a lot. Thank you.

This was awful & pathetic

Helped with my research on wasrsawa ghetto ✌️

helped me on my religious homework thx

Thank you for sharing this.

Very great for my school project. Thank you a lot!

thank you so much really helped me on my school work. i might be German but i would never do any of these things and i just hate what my ancestors did. but thank you for creating this website website creator.

where/when did they get their food rations?

Da best, tots amaze, it was GOOOOOOOOOOOOOOOOD, really helped me. The best article thingy EVER!!!!!!!!

Good it helped me

it helped me on my research project

very helpful for me to find quotes for my journal, that is for school.

This helped me with my paper for class as well. Interesting facts about the horrible things the Nazis did.

This helped alot for the paper I am doing for a class. I hate the horrible things the Nazis did to the Jews. It makes me sick to my stomach

It helped me a lot.

good for a essay that I am writing

Just another article referencing the fact that most of the people who experienced this, whether they lived or died, had no political motives and had to pay the ultimate price for the narrow-minded whims of those in power. Until we eliminate borders and boundaries and restrictions caused by intolerance of different kinds of people we can never ensure ourselves that history would not repeat itself.

This helped me with my history HW, thanks.

An incredibly handy website that is really educational but throws a new perspective on life in the ghetto. Thank you!

Did you have any contact or knowledge of the work done by Irena Sendler? Beyond the book Life in a Jar, can you share important experiences of rescue? Thank you. Gratefully, Irene

This helped me on my English project as well. Thanks

This helped me on my literature assignment, thanks.

This just makes me sick to the stomache and just curl in a ball and cry for all the people who went through this. The information of this article helped me understand more about World War II so thank you.

The " Final Solution " should have been the " First Solution "

A Derrin, you are a horrible human being please do not leave comments like this again

This article helped me with my history assignment, thanks a lot.

wow thanks helped me a lot now i can finish my paper:)

Decent article, it provided a good deal of information.

I love this article! It has helped me a lot with my history assignment. Thanks to whowever wrote it

This was not helpful!! I found no info that related to how warsaw was like back then.

this was not helpful i found no info that related to how warsaw was like back then.

That is so terrible what they did

Wow! This has so much information! This has really helped with my humanities assignment! Thanks a lot!

this was very handy helped a lot

this is good info thank you

So helpful, thankyou so much, had a massive essay to do as well! :))))

this is a good article

As stated before, accuracy helps, 184 calories and not 200 calories for rations. Despite this, it is very informative, and it's free information, of course people are using it for academic research!

ths helped for my 500 ward report a lot

this site help alot with my paper!! thanks:)

This is tots a 10 it helped me a lot with my research paper thank you so much to who ever wrote this your amazing trust me best site for the warsaw ghetto especially when you have to write 5,000 word research essay!!!!!

I believe the daily diet limit in the Warsaw Ghetto was set at only 184 calories per day, by the Nazis. Accuracy helps us to recognize evil again; like the upcoming 20% cut in the overall spending on Disability Living Allowance, (DLA), benefits in the UK, its like the Nazi's T4 program all over again!

Great thank you for the info

i Think it really sucked and it smells like egg salad!!

This is a very good article! Thanks so much, it helped me a lot with the ten page report i have to do on this topic!!!

i will do it for school work if i want

it was bad but good

this article was fantastic and has very good information! I am working on a project for school and this gave me lost of information! Since I have to do a 3 page paper!

may all the nazis souls burn for eternity

it is really bad i cant believe they did that

it was very goooooood!

that was so awful and stupid

This helped me A LOT with my school powerpoint! Great job to who ever wrote it! :)

thanks for the help with my homework

Although there is basically nothing left of the Warsaw Ghetto wall,you can still sense the horror in that place,especially at such places as Ul Próżna and the sites of Pawiak prison and the Umschlagplatz Monument at ul.Stawki.