Warsaw Old Town - The Ancient Heart of the Capital

The heart of Warsaw often resembles a quaint provincial town, which is fitting as for around three hundred years that is exactly what it was - a fortified town of modest stature. Warsaw was founded by the Dukes of this region of Poland, Mazovia, in the late 12th century. Their castle, which was transformed into the royal seat in 1569, was the most important edifice and it remains the focus of the area to this day.

Fragments of the old city walls still survive, and within the Old Town there are many landmarks to explore, including the historic cathedral of St. Paul's. 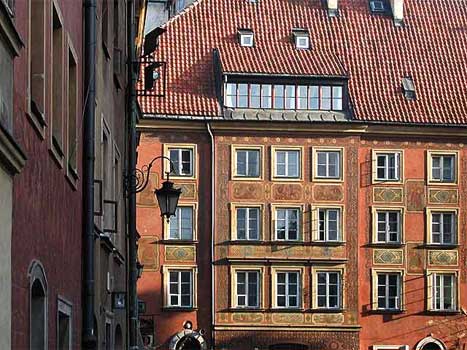 The Old Town was utterly destroyed, like the rest of Warsaw, in the closing phases of the Second World War. Some of the hardest-fought battles of the Uprising took place here. Afterwards it was reconstructed with the utmost care. The Royal Castle, which stands over Plac Zamkowy, was the last great landmark to be restored, its rebuilding commencing as late as 1971.

Following the opening up of the East in 1989, the district quickly re-established itself as a major tourist attraction. It has a wealth of shops and restaurants to potter around in. Several buildings are strikingly beautiful, particularly on the Old Town Square. However, at times the area does feel like a film-set, strangely out of key with the thrusting city around it. Naturally the organic feel of the place is gone, and there is a hollowness to much of the area.

However, few could fail to be moved by the sheer existence of Warsaw's Old Town today. As you step out of the city's museum on the market square having viewed the documentary about Warsaw's wartime odyssey, few can fail to be touched by the the sheer power of the ancient city in having overcome all odds to rise once again from the rubble.

There’s Amsterdam with its coffeeshops ; London lures us in with Camden Town; and Copenhagen boasts the quirky Freetown Christiania. But visit Warsaw and discover something even more unusual and sublime: Welcome to Praga! Praga is like a whole new city and it’s only across the other side of the Wisla River. Praga is bereft of the commercial influx of a Starbucks or McDonald’s on every corner – expect arty cafes, quaint little bookshops, local pubs with atmosphere and vibrant graffiti. You may have heard of Swiss and Belgian chocolate, but what about Poland’s finest, Wedel? The Wedel Chocolate Factory offers tours for visitors and there are many shops and cafes throughout Poland where you can sample some of the best-quality chocolate you will ever eat. What’s more, a bar of Wedel chocolate only costs around 2 or 3 zlotych.

I found the old town to be full of life, and not feel like a film set. It’s so wonderful.

Now celebrating 60 years since the reconstruction of the Old Town

The biuldings were very nice and just took my very air away tha tower was nice and the little people that danced on top of the house that I stayed in , they were cool if they weren't so darn loud I never even slept so don't go its so boring

well it was kinda cool man

I have been inside the Royal Castle watching Canaletto´s paintings. I could not help but crying, when thinking how beautiful was Warsaw and how someone could decide to destroy all this beauty for revenge.

I've been around the world and back and the Warsaw Old Town is one of the most beautiful and moving places I have ever visited. My last visit was in 2006, and I am eager to go again. If you have the opportunity, you must take advantage.

dis is sooo.......crazii how ppl could acutually gp thru all this i would hate to be livn in dose dayz i pray 4 those ppl that died 4 no reason jus cause there religon i pray to good they live in peace nd god bless

having visited stare miasto twice i was deeply moved by the fim and bywhat has been accomplished by the polish people, of course iam polish american and proud of my heritage.

This is a great site to go on to find out new things about Warsaw and you can totally tell much work went into making this site.

The old town was very good

I think their must be heart broken

The Old Town used to be my favourite place to go out when I was at school and at the university so you may say I am bias! So many memories... so many happy bottles of wine with friends... I still love this place as much as before. After more than twenty years of living abroad and travelling, during the recent visit I rented an Old Town apartment. It was pure magic despite December rain and chill. My Italian wife and my kids loved the Old Town and the whole adventure. They want to go back. What can you say - this place is special. There are nice galleries and theatres. Try Teatr Wielki (walking distance from Old Town, check what is on before you book your apartment). Try platter for two - some restaurants do a selection which is tasty and nicely priced. Some game dishes are very nice. Old Town is highly recommended!

This review hit the nail on the head. I may be only 14, yet I know the importance of this town to Poland and the tragdy it went through not so long ago. You feel like you are stepping into a fairy-tale book when you enter "Old Town", and going there is an expirence I will never forget.

A good, accurate description of the place - it does feel strangely film-set-like. Apparently a lot of the reconstruction of the Old Town in Warsaw was done based on paintings by Canaletto. He spent a few years as court painter to the Polish royalty (I think) and was known for his highly accurate paintings. He's best known for his paintings of Venice, of course. Anyway, I also understand that most of the rebuilding work was done by women, because so many of the Polish men had died in the war, but that fact was also possibly exaggerated somewhat by the Soviet propaganda machine, which loved to emphasise the equality of the sexes (ie all those images of women on tractors, in factories etc etc)