The Warsaw Pact is the name commonly given to the treaty between Albania, Bulgaria, Czechoslovakia, East Germany, Hungary, Poland, Romania, and the Soviet Union, which was signed in Poland in 1955 and was officially called 'The Treaty of Friendship, Co-operation and Mutual Assistance'. Although this rather cute title sounds more like the agreement which you and your friend have about sending cards to each other on Valentine's Day, it was actually a military treaty, which bound its signatories to come to the aid of the others, should any one of them be the victim of foreign aggression. 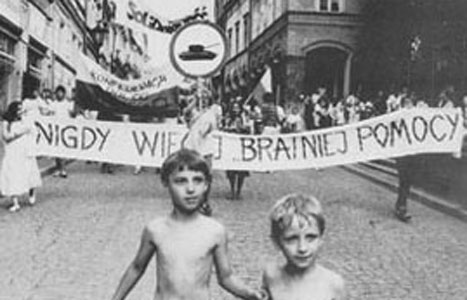 Nominally the Warsaw Pact was a response to a similar treaty made by the Western Allies in 1949 (the North Atlantic Treaty Organisation, or NATO) as well as the re-militarization of West Germany in 1954, both of which posed a potential threat to the Eastern countries. Although it was stressed by all that the Warsaw Treaty was based on total equality of each nation and mutual non-interference in one another's internal affairs, the Pact quickly became a powerful political tool for the Soviet Union to hold sway over its allies and harness the powers of their combined military. When Hungary tried to extricate themselves from the agreement in 1956, Soviet forces moved to crush the uprising; and, in 1968, Soviet troops invaded Czechoslovakia (with support from five other Pact members), after the Czech government began to exhibit 'Imperialistic' tendencies.

Following the diminishing power of the USSR in the 1980s and the eventual fall of Communism the treaty became redundant. The Warsaw Pact was officially dissolved in Prague in 1991, after successive governments withdrew their support of the treaty.

* This article on the Warsaw Pact is meant to be an informative introduction to Warsaw's history for travellers, and is not meant to be used for academic research. Please do not use it for any academic papers, but instead refer to published academic works and textbooks. *

So understandable! Love it

It's very useful and easy to understand, thanks

This was kinda helpful!

IF you look at history,you will find that America has always been a very dominant country/If you look today the dominance of nato run by the usa.perhaps you would think if living in Russia that again America is trying to rule the world

I can't understand it

Is there today a threat from peoples of these areas as they have come to the US now to live? Were there a long term aspect of that way of thinking to harm the US in a long term process. Were people sent her to do that in time?

Thank you soo much!!

Thanks, this clarified a point of 'how this came to be' (so insane) concerning contemporary problems in Poland. Though not extensive, it is a helpful launching point to learn. (Ignorance is a choice, caring is the motivation to overcome insane banter and think independently) This article helped. Thanks!

Super helpful and informational for exams or papers! Awesome! Political tool for USSR was a great point for why the purpose of internationalism was defeated.

The states involved with the Warsaw Pact were influenced by ussr

Yes, that is very correct, Leroy. You could even use stronger words than "influenced". One alternative is "controlled", another is "dominated".

Warsaw Pact was a Soviet command structure to control military forces of it's satellites. It's Its primary focus was not to defend against external aggression, but, to preserve Soviet installed regimes in Members' countries. Its only actions were exactly that, overthrow of Hungarian government, followed by overthrow of Czechoslovakian government.

I agree with what you said Kandin

Well thi is really informative and not for academics purposes because for us in the humanities there are a lot that need to be know pertaining the WARSAW PACT. issues such as the the principal actors in the formation of the pact,the primary and secondary motives for the pact,how successful the pact was, and so many other questions

this really helped me in english class. you should use it

Could somebody tell me the capital of Warsaw?

dude. warsaw is the capital of poland. get ur facts straight.

Warsaw is the capital of Poland

This really helped me do my research for my paper. thanks!

This really helped me.

Would they ever felt sorry/bad for what they did?

what advantages did the warsaw pact countries have in a conflict with nato?

If one of the countries would be attacked, it promised them security from the USSR

The perfect notes for exam preparation. Thanks

All true facts, i would use this information for academic research. Thanks

it is totally based on unipolarization & harmful for the developing countries

nice but no capion for the picture????

Wait does any body know what the political organization of the warsaw pact was?

i like the part where they showed the turtles mating, i had no idea what those poor little creatures have to go through

Very informative and unbiased data which shows " negative groupism is always fatal towards humanity" . Thanks.

Wel. . This article is really inf0rmative. . Like it! And the main reas0n for warSaw pact made six yearS after NATO is that in 1955 america made west germany as a member of NATO so sovait replied immediately by making Warsaw pact! Thanks. . . !

why did hungary want to leave the pact if it was a pact of friendship?

I don't know if your question is sarcastic or not :-) The Russian-dominated USSR was using the Warsaw "Pact" as a way of dominating several countries, keeping communist puppet regimes there. When students in Hungary had had enough of this, they went out in the streets to demonstrate against communism, instead demanding freedom. The Russians could of course not tolerate this, and the conflict developed into battles with thousands of dead people and hundreds of thousands of refugees. "Pact of friendship" is typical doublespeak: Using a very misleading name to hide reality.

A very replete and didactic, aggregate of information pertaining to the significance of treaties. The Warsaw Treaty Organization of Friendship, Cooperation and Mutual Assistance is indefinitely a material source of prospective international law students. The Warsaw Pact military alliance was, without incertitude, dominated by their desire to prevent, at all costs, any further recurrence of a large scale invasion of its territories from the western powers (NATO) and the Paris Pacts of 1954. The members of these states were emotionalized by the previous empires in their attempt for conquest. Very brilliant!

Exactly what I need for my short assignement, thanks!

Absolutely amazing! I now have a great understanding of the Warsaw Pact

When will people stop rewriting history in order to promote their own agendas. If you check the facts you will find that the formation of NATO and the rearming of West Germany was done in response to the growing threat of the Soviet Union. The creation of the Warsaw Pact was only a formality.

Hey that's all the information I need, though it was a little too brief...

Hey yam if u want to be negitive do it somewhere else plz its rude so shut the heck up plz 4 all of our sakes good info helped me with project :)

Good short summary of the Warsaw pact. I got what I needed for my assignment, thanks.

I truly hate americans like yam, that give all of us a bad name, this was an incredibly helpful article and I'm sorry on behalf of all of us "yanks" ;D

hey yam! can you please stop calling the Warsaw pact retarded? and you spelled it wrong by the way. this is a sensitive topic for european people and it can be offensive by calling it this. it is a helpful site and you need to SHUT UP! leave your comments to yourself and leave the site if you don't like it. just please don't leave your negativity with all of us. Thanks

The write-up is an excellent piece of informative essay on the Warsaw Pact,-its genesis,role during its continuance and termination.Kudos !

this is retarted nobody cares

I think this site displays very good detailed information about the Warsaw Pact.... I use this site all the time for American History

youre all a bunch of balsavics

this gave me GREAT info for my school powerpoint project. it helped lots :0

Well written and informative summary; however, I needed to search the comments to find out WHO formed the Warsaw Pact. (Thank you, to the one that included the info:) Otherwise, great work!

No caption for the picture? :-/

that's a helpful site thank you very much WARSAW-LIFE.COM!!!

Khrushchev created the pact, and I found this site really good for my GCSEs :)

I believe it is a good article however there is still confusion as to WHO created the pact.

Informative and direct. the only discrepency is that communism did not fall. you still have red china, N korea, Vietnam and others.

would the author of this site stop making fake comments? this article is average. not superb.

Pretty useful but not enough information

It was supa dupa man

This was great! We had to find if this was a reform or revolution and it totally helped me and my partner! We didn't have to use any other sites! Thank you!

Hehe it is a cute title c: And it told me what I wanted to know so meh; good enough for me.

It was really informative.

good article, by why cant this be used for academic research?

I liked it. All i needed was a brief summary, but this wow'ed my teacher.

I love this site!

anybody know what took USSR 6 years to create warsaw pact in response of NATO ? what were the reasons for which it took 6 years to make such treaty in response to NATO ?

Technically, since NATO is still going strong and Warsaw has been disbanded,NATO won. But it was basically a stalemate throughout the war. Many people think that USA didn't win, but our goal was to contain communism, and we did that everywhere except Vietnam.

Was good on different points, but could be more detailed with the "key features"