Safety First! In general, Eindhoven is a calm and safe city, and tourists should feel at ease. However, that's not to say that crime never…

Above: It helps to bring a bike for getting around the city. Centre: Fly into Eindhoven's modern airport. Below: It's easy to get to Eindhoven by…

Above: Some zones in the centre are pedestrian-only Centre: Spare your legs and take the bus. Below: UFO parking available!By Public…

Any hotel, restaurant, bar or shop worth its salt will accept all the major credit cards, however you may be asked to produce photo ID to confirm…

One of the things the Dutch are famous for are their language skills. The majority of the people speak English quite well and even a bit of a second…

The history of the city of Eindhoven dates back to the 13th century, when it was originally known as Endehoven, literally meaning 'End Yards'. The… 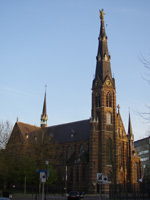 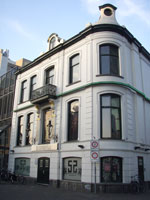 While there's plenty to see in Eindhoven, the good news is that the city is fairly compact, and it's possible to see most attractions on foot or by bike. For a good start, see our walking tour guide below, or visit the following pages for more information about Eindhoven: 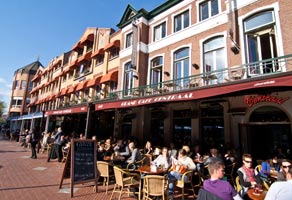 The best place to start a tour of Eindhoven is the Markt, or Market Square (below), which lies south of the main train station. This is the heart of the city, and the pedestrian-only streets surrounding it form the city centre. 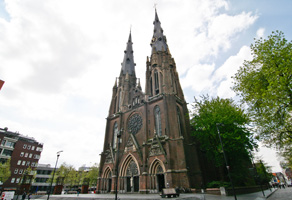 As you wander the pedestrian area, you'll find that this is the best part of the city for shopping as well as dining, and if you head south through either shopping street Rechtestraat or past the Heuvelgalerie through the Jan van Lieshoutstraat, you'll end up at the Catharina square with the impressive Catharina church where you'll find the start of the Stratumseind, a narrow but long street with plenty of bars and clubs that can be explored in the evening.

As you head south, you will inevitably cross the Dommel River, which offers plenty of riverside paths as well as green areas for summertime strolls. Follow the Dommel to the west, cross it again, and you'll run into Stadhuisplein, or City Hall Square, home of the very modern City Hall building. Just over the Dommel lies the even more modern Van Abbemuseum, Eindhoven's contemporary art hub, and a must-see for any visitor.

If you follow the Dommel further south, you will enter the Stadswandelpark, a city park with diverse vegetation and outdoor sculptures. Those with more time (or a bicycle) can follow the river even further south to the Genneper Parks, a vast green recreational area with sporting activities as well as museums.

But there's still more to see! Head back towards the city centre, but veer west this time and you will run into the arty area known as 'De Bergen'. A good way to approach this area is to go up Hoogstraat Street, which is full of trendy vintage shops. Grote Berg and Kleine Berg streets are both worth fully exploring, as they feature some of the city's most unique galleries, cafes, and shops. Finally, you can make your way north to Wilhelminaplein, a small square just outside of the centre that caters to an older crowd.

Of course, while these are the highlights, there's much more to the city that can only be discovered in person, so get out there and explore Eindhoven!

A list full of restaurants, cozy overnight stays and exciting activities for the couples and passionate lovers.

I will be staying in Eindhoven on my European bike tour in November. The hotel says it does not store bikes and that I should use the bike park in the station. Is it secure and how much does it cost? Thanks

We are looking for a statue of a young boy by a sculptor in Eindhoven dating back to the late 40's early 50's. We understand that the sculpture was placed on a bridge coming into Eindhoven. In the article on Eindhoven it was mentioned that the Eindhoven Tourist Board has a publication listing and or describing the artworks /sculptures of Eindhoven. We would like to be able to access this if anyone can help to see if it is included. Regards Gail

My Dad was in Holland during World War II. I found a postcard that shows the Eindhoven market prior to the bombing of the square. A car with what appears to be a gas chamber on top of a car is driving through the square. He had written it was apparently during the German occupation. If this is of interest to the town , I would be glad to send this to the city for historical purposes. Let me know if you are interested. Thanks.