The history of the city of Eindhoven dates back to the 13th century, when it was originally known as Endehoven, literally meaning 'End Yards'. The town changed hands between the Dutch and the Spanish throughout the late 16th century. However, in 1629 it officially became a part of the Netherlands.

Until the industrial revolution, Eindhoven was a small, unimportant town. But that all changed in 1891, when a little lightbulb manufacturing company known as Philips was founded in the small city. During the early 20th century, industry grew exponentially in the city, and with it, the population and importance of Eindhoven. In 1920, the city expanded to include five new municipalities.

The tobacco, textile, and later, automobile industries drove the continued growth of Eindhoven throughout the 20th century. During the Second World War, parts of the city were destroyed by air raids. The reconstruction that followed replaced many of the destroyed historical buildings with modern incarnations, including the first high-rises. Since then, the city has embraced modern architecture, and is now known as the capital of Dutch industrial design.

Today, Eindhoven is the fifth-largest city in the Netherlands, with a population of about 212,000, almost a third of whom are foreigners. It is still home to Philips, which is now a multinational electronics corporation, and has made the city a major technology hub. 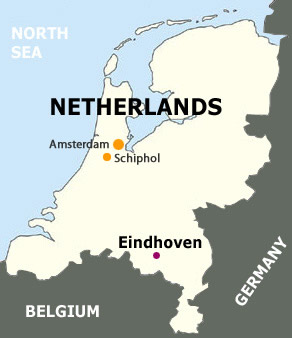 The area that now comprises the Netherlands was occupied by an assemblage of counties mainly under the Holy Roman Empire throughout the Middle Ages, eventually unifying when they fell under the control of the Habsburg empire in the late 15th century. Until 1579, the territory known as the Netherlands included present-day Netherlands and Belgium. That year, a schism divided the two regions into those under the rule of the Roman Catholic King of Spain in the south, and the independent north. However, it wasn't until 1581 that the Netherlands would declare their independence from the Habsburgs, and the country named 'The Republic of the Seven United Netherlands' would form, officially signed into existence in 1648 by the Peace of Westphalia.

Meanwhile, several Dutch cities grew as essential European trading ports, and with the establishment of the Dutch East India Company, the Dutch founded colonies in present-day Indonesia and the East Indies, as well as New Amsterdam (now New York) and South Africa. The Netherlands had entered into a golden age, which would last for much of the 17th century.

In the 18th century, the republic would fall under French rule, and part would split off into Belgium. In 1839, the Kingdom of the Netherlands was officially established, which remains to the present day. The Kingdom became a constitutional monarchy in the mid-19th century.

The 20th century saw the continuing decline of Dutch military power accompanied by the rise in the nation's economic status as compared to the previous century. While the Netherlands remained neutral through World War I, the Nazi invasion in 1940 during World War II threw the country into the heart of the conflict. At the time of the Nazi occupation, 140,000 Jews lived in the Netherlands, but only about 40,000 would live through the war. Perhaps one of the most famous was Anne Frank, who perished in the Holocaust but whose diary would go on to tell her tale to millions of people. The Netherlands were finally liberated by the Allies in May 1945.

After the Second World War, the Netherlands would go on to become a founding member of many international organizations, including the European Coal and Steel Community of 1952, which would go on to become the European Union, as well as NATO and the World Trade Organization. In 1999, the country was a founding member of the eurozone, and thus one of the first to adopt the euro. Today, the country continues to be a driving force for European integration, and is known as the judicial seat of the EU, as it is host to five international courts: the Permanent Court of Arbitration, the International Court of Justice, the International Criminal Tribunal for the Former Yugoslavia, the International Criminal Court and the Special Tribunal for Lebanon.

Very interesting and one comes to know a lot about Eindhoven.

Thank you for all the wonderful information. I will be visiting Eindhoven next summer with my daughter and grandchildren. In fact, I lived in Eindhoven over 45 years ago. And ja, Ik spreek nog wel een beetje Nederlands. Het zal leuk zijn om Eindhoven weer te bekijken na al deze Jaren.