Bear in mind that winters in this neck of the woods are decidedly chilly to say the least. Blankets of snow make for a wonderfully romantic backdrop…

Above: Robot disguised as a train Below: Unidentified hanging objectBy Air Although one disgruntled journalist said he'd 'seen more…

Again, it should be plain-sailing with credit cards, especially in the Old Town. Of course, if you try and buy a single doughnut with your flexible…

Bankas, baras, klubas, restoranas, sportas - it sounds easy enough. However, at this point, sadly we have to shatter the illusion and confess that…

Vilnius declared itself capital of a sovereign Lithuania in March 1990, but it was not until August 1991 that Moscow finally relented and recognised… 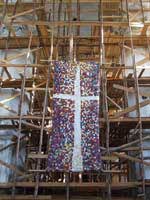 Above: A quilted cross hangs in an abandoned church... Below: Solemn dusk in Bernardine Cemetery 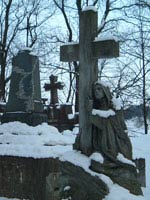 The classic way to enter the city is through the Gates of Dawn. This old portal is not only a beauty, it holds one of the most sacred icons in Catholic Europe. Pilgrims trek from miles around to pray here.

Heading north into the Old Town you'll find few modern additions to the surrounding streets. Baroque churches rear up on all sides, recalling the era of Vilnius's golden age in the Commonwealth of Poland and Lithuania. The University holds pride of place at the heart of the city. Polish Romantic poet Adam Mickiewicz once trod its labyrinthine courtyards, and, turning to more recent times, Lithuanian students plotting anti-Soviet intrigues in the lead up to independence. The nearby Presidential Palace once served as a home for Napoleon on his way to and from Moscow.

A focal point on the northern fringe of the Old Town is Cathedal Square, which is dominated, naturally enough, by the Cathedral itself. Leading west from here is Gedimino Avenue, a grandiose echo of Tsarist rule. It's changed its name half a dozen times with the coming and going of different powers, but today it's an inspiring place for a stroll, chock-full of shops, cafes, restaurants and more.

Proudly ensconced above all this is the old Royal Castle. Actually, if we're being completely honest, not a lot remains of this once mighty seat. But you can enjoy a dizzingly romantic view over Vilnius itself. Down below, the renaissance Royal Palace is reemerging in what has to be one of the most extraordinary architectural projects of the decade.

Beyond the Old Town Uzupio beckons from the northern banks of the River Vilnia. This picturesque district found its feet again during the late 80's when artists moved in in droves. It's now becoming an increasingly upmarket affair as property values rocket, but it's still got bags of character. The old Bernardine Cemetery is well worth a look, and if gothic is your cup of tea, we'd also recommend the Razu graveyard on the other side of town.

Vilnius was for centuries a decidedly diverse city, and during the Renaissance era, amongst the most tolerant in Europe. Echoes of this can still be discovered, such as at the Karaite kenesa in Zverynas. Before the war there was also a fine mosque and numerous synagogues. However, Vilnius's vast Jewish population was decimated in the Second World War. Today, a renovated synagogue and a handful of museums evoke what was once known as the 'Jerusalem of the North.'

Further afield, it's worth considering a daytrip to Trakai, a peaceful spot, famed for its castle and lakes.

Excellent website. Lots of useful info here. I?m sending it to a few friends ans also sharing in delicious. And naturally, thanks for your sweat!

Good tours in Lithuania! more on www.holidayguide.lt as well they were helpful for rent a car,bycicle and apartments

Amber Museum-Gallery Nina: Very interesting place, beautiful collection. Charming, very gentle guide. Velo-City frankas: The address has changed to Pylimo 31 Maxima evelyn: I was shocked how rude and xenophobic the staff in this place is. I know that many of the Eastern European ex-communistic countries are very racist, especially the people over 40 something are like this. But it is always shocking to be confronted with uneducated staff like that. In Western countries people which treat customers like that, would never get jobs. But in Lithuania, Bulgaria, Hungary and also Poland you can act like this. Very sad, and very embarrassing for the countries. They should leave European Union if they prefer to be xenophobic, antisemitic and homophobic. And Maxima should stop telling lies ont heir website, that customers are most important for them, and that they treat them with respect and friendliness. Big lie. If you like I can male videos how they teat people that don´t speak the local language, or are coloured. It reminds me of the deepest communist times. Disgusting. These older ex-communist people are full of frustration and hate. Maybe therefore everybody looks so grey and unhappy in these countries. When you know Skandinavian or Southern countries it is like a different planet. In Bulgaria so many young people agreed with me about this rude unfriendly older citizens. And everybody told me they want to leave the country because of this. I fully understand. I pray everyday that the borders will be open again, and I can go back to friendly, openminded, edcuated and cosmopolitan people. Maxima evelyn: If you find this products not expensive, you hae never been in German supermarkets. But I know Poland is very expensive, maybe therefore youa re used to this overprized products.