Down they came like dominoes. East Germany, Poland, Hungary, Czechoslovakia - the communist regimes were collapsing across Europe. And before long, the peoples of the Baltic would also rally to defy the Soviet tanks. When a two million strong human daisy chain stretched from Tallinn to Vilnius in August 1989, something stirred in a curious corner high above Vilnius.... the Uzupians too would have their revolution:

'Everyone has the right to die,' they continued, 'but this is not an obligation.

All in all, there are 41 venerable points in the Uzupian constitution. And one can find them today, proudly ensconced on a plaque in the state of Uzupio itself. 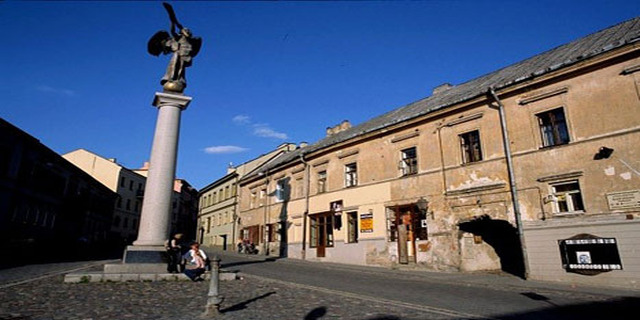 Uzupio (it sounds very much like a planet from the realm of Flash Gordon to us), also known as Uzupis, has not only its own constitution, but a national anthem, a bishop, and four flags (one for each season of the year). And of course, like any self-respecting state, Uzupio has its own national holiday - Uzupis Independence Day - celebrated annually on April Fools Day (April 1st).

Uzupis, which means 'beyond the river' (another poetic string to the Uzupian bow) is a logical name, considering that this small district rises up above a brook in the River Vilnele. But generally, logic is not the preferred realm of the Uzupians. They prefer good old-fashioned nonsense.

Back in the 1980's, artists began to settle in this tatty hive of stone and wooden cottages, and they soon made the district their own. It's true that today, the area is not quite the gritty, cutting edge haunt that it once was, but it's still a place that's full of character, and well worth the short stroll beyond Vilnius's Old Town.

In amongst the mellow little streets and alleys, you'll find all kinds of beguiling curios. Turn a corner and discover dreamy courtyards brimming with wildflowers. And back in the main square you'll be greeted by a fantastic statue of a trumpeting angel. Equally magical is the Bernardine graveyard, with its sweeping views over the woods.

So when's the best time to wander the streets of Uzupis, drop into the bars and say hello to the mermaid? Golden Autumn, snow-cloaked Winter or balmy Summer? If in doubt, why not come on April 1, Uzupian Independence Day, when a bonanza of concerts, parades and other shenanigans kick off. That's right, you'd be a fool not to.

A proposal for the 42nd article of your constitution: Everyone has the right to leave a suitcase/backpack in Uzupio - to come back! Some days ago we had a good time in Vilnius - and came to love Uzupio!

much love, light, laughter and enlightenment in your city. and I hope it's a Beranadien Celebration Graveyard