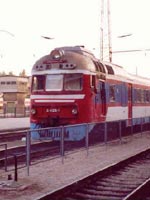 Above: Robot disguised as a train 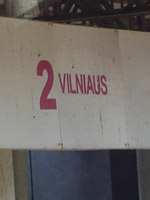 Although one disgruntled journalist said he'd 'seen more impressive bus-stations', the diminutive Vilnius Airport has plenty of fans, and it has the added bonus of being just 6 km from the city itself. So bear in mind that if your jolly taxi driver spends an hour escorting you to the city centre, you're being taken for more than a 'ride' (10-12 litas is a fair price). But to start from the start, it's now possible to fly to the Lithuanian capital with several leading airlines, including British Airways, Lufthansa, Dutch KLM, Polish LOT and of course Lithuanian Airlines. Budget airlines such as Wizz are also getting in on the act, but some services arrive at nearby Kaunas (in which case there are shuttle buses to the capital).

Again, Vilnius has a very pleasant train station that manages to exude an immensely laid back air. It also works, which is a handy bonus. On the negative side, train services may be plentiful within Lithuania itself, but travel connections between Vilnius and the major European capitals are few and far between. Indeed, they seem to be shrinking rather than growing. The most used service is the Warsaw-Vilnius connection, which leaves bright and early every day, arriving the same evening. However, this involves changing at Sestokai. 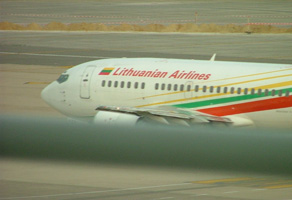 If you're backpacking round Europe, this is definitely your cheapest option, short of thumbing a lift with a moustachioed lorry-driver with a marked taste for vodka. Again, Poland is the main springboard (for both), and there is even a service that runs from Rome to Vilnius, stopping at Vienna, Cracow, Warsaw and Kaunas on the way. See Eurolines for more details. Connections to Lithuania's other neighbors can also be made from the bus station.

We may no longer be in the golden age of the motorcar, a time when you could cruise for miles, cigar in hand, and barely meet another driver at all. All the same, there's no doubting that for the serious adventurer, being behind the wheel of your own vehicle opens up all kinds of possibilities. This is the way to really grasp the flavour of the country. Basics to bear in mind are the zero tolerance law on alcohol, and speeding - cameras have now been installed on many major roads. Also bear in mind that neighbouring Poland has the worst accident rate in Europe, and road conditions are not always pristine. Oh, and have fun parking in the centre...

The normal price is 15-20 lt to the Old Town. To get this price, ask a local to call you a taxi, or if you see some passengers ordering local cabs, ask if they can order two. Do not get the taxis from the outside of the airport, they are a joke.

If you are arriving in Vilnius airport at night when no trains or busses then take a taxi. Do not take any taxi from outside of the airport. I would recommend to call the taxi by phone, for example Ekipazes: +37052395539. It only cost me 9 litas (~2.5euro) on 1.12.2011 from th eairport to the train station. You also can check for yourself: www.ekipazastaksi.lt

At 2nd. June 2010 I shared a taxi. I negotiated a total price of 60 Litas for my trip to the City center and 20 more for the further trip to RadissonBlue. I would pay at my destination. As we approached the latter, he claimed to have agreed to 90. I shouted at him, that I was seriously annoyed and that we would leave his taxi immediately if he wouldn't stick to the negotiated price. I paid the 80. He was somewhat ashamed, but I hope, that he did not charge the two other passengers, as they left.

From a airport you have different price that in town , because offical price at the airport is 10 lt for a boarding fee and each km is 6 lt.

Just arrived in Vilinus, I had requested the Hotel Raddison to send me a airport pickup but mysteriously the hotel car did not turn up at the airport as a result I had to take a airport taxi.. the meter was flying!! had to pay 100 litas !! the driver said this was the rate..from airport to raddison.. I think the hotel driver was part of this scam.. its terrible!

You should take a minibus instead of taxi, it costs about 1 Euro.

Tip: always ask a taxi driver to issue you a bill and indicate a route there, then he cannot keep the money you pay for himself. Alternatively, he may be willing to lower the price...

I have been traveling to Vilnius for more than six years and the taxi driver from the airport have increased their prices constantly. But today it became ridiculous as I had to pay 70 Litas. I complained and told also that only two months ago I paid only 45 Litas from the airport but he commented that this is the right charge. This entry to Vilnius is really the worst experience and I wonder why no officials have taken any measures since years. Even in Riga, where a lot of people have claimed in the past of having been duped I have never made any similar bad experience.

It is time that you update this page: A Lith. Airlines/Flylal had to cease service in March 2008. Till the 4th of Januar 2010 travelers from Holland to Vilnius had to transfer at Praha, Copenhagen, Helsinki or Riga or travel first to Brussels Airtport to get there a direct flight. From the 4th of Januar 2010 Air v altic restarted a direct connection vv Amsterdam, returnflight from 19 euro ( excl airporttax ) B Taxi from the airport to the hotel or apartment is 50 litds fixed price. From the hotel/apartment it is better to call 1800 or 1440, charging to the airport is than 10 till 20 litas. Cheapest manner to go to the hotel or from the hotel to the airport is Bus 2, you pay than only 1,45 litas per person. For the rest I miss the monthly event agenda, maby an error on the site?

OK, i agree with Air, by the way, traghetto travel especially Europe are delightful to travel

OK, i agree with Air, by the way, ferries travel especially Europe are delightful to travel

I drove all the way from the UK. Holland, Germany and Poland. Two stops, Berlin for fuel for me and the car and the same at Bialystok. 22 hours and a good sleep when I got to Vilnius. Had a great two weeks with my girlfriend over Christmas and New Year 08/09. Return journey was by ferry from Klaipeda to Kiel(Germany) a much better way to traval, 21 hours and the shipping line is DFDS LISCO, check their web site. Will be back for the summer and with the car. If any "Brit" are sick of Spain and France for holidays try Lithuania it's a great place and not that hard to get to with your car.

the have plan from tunisia at vilnus

Just returned from Vilnius. We were charged 60 litas from the Radisson SAS to the airport. The hotel had told us it would cost 50 to 60 litas. The driver didn't turnon the meter and said it was a fixed rate to the airport. Since the price of oil has soared I didn't want to argue for the 17 euros even though the airport is not that far. When you arrive, it's best to have the hotel send a driver to pick you up (costs about 24 euros) especially if you are arriving late and your flight is delayed.

Just flew into Vilnius. Beautiful city, but I too was disgusted by the taxi driver. According to the Bradt guide to Vilnius, taxi should have cost no more than 20 litas. Guidebook also said that majority of taxi drivers were pretty decent dudes. So I jumped in a taxi at the airport. I checked that the driver switched on the meter straight away. But was dismayed when the meter ticked at a ridiculously rapid rate.... I said to the driver that I thought his meter was broken. He commented that his taxi was the most expensive to the airport...and I asked him why. He said it was a special airport price - double usual price. Which I told him was bullshit.... He said distance was 9km (Old town is 6km) and 3 litas per km. So let's do the maths - 27lita? (including the detour) The fucker charged me 50!!!!! But the fucker took my money - of course I only had a 50litas. Demanding change was of no use - the fucker wouldn't give me any. Took down his rego and will contact authorities. Don't know if that will be of use but I can at least try.

Taxi drivers are asking more and more to get from the airport to the Old Town every time I go to Vilnius. On a Friday in December '07 the taxi driver asked me 70 Litas. If my pay went up at the same rate, I would now earn as much as the boss of my boss. Unfortunately I still earn the same as 2 months ago, so declined and headed for the bus, then found somebody more "reasonable" that went by the meter totaling 50 Litas.

Prices for a ride from the airport to the Old Town have apparently soared. From the airport, the first taxi driver asked me 60 Litas (to be fair, it was national holiday), and refused my offer for 40 Litas. After I purchased the bus ticket and was heading for bus no. 2, another taxi driver offered me the ride for 45 Litas. From the old town, during a business day I have taken a taxi at the parking nearby St. Anne's, and costed me 25 Litas to get to the airport. BTW, is it possible that in Vilnius taxi drivers are not obliged to display their prices? In English please...

Hello, How can I add my details in your website? Thanks