First impressions of Trakai are liable to be fairly mediocre if you're arriving by bus or train. But never fear. Once you've ambled a little closer to the heart of town you'll soon fall under its spell. This tiny lakeside settlement has all the right ingredients for a relaxing weekend away from the city. And at a mere 26 kilometres from central Vilnius, it won't take an Arthurian quest to find it.

Many moons ago, Trakai was a capital of the Grand Duchy of Lithuania, and something of the mystery of that pagan mecca has endured till this day. Whilst navigating your trusty pedalo across the lakes, there's a lingering sense of the supernatural on all sides. Perhaps those trees by the castle really will get up and march off, Lord of the Rings style? And that curious pole jutting out by the reeds - is that really just a stump, or is some Lithuanian Lady of the Lake about to burst forth from the waters and anoint us with a gleaming cutlass?

Hmmm, perhaps we shouldn't have eaten that smoked eel after all, but not to worry, there are other things to eat in Trakai. Indeed, besides the old ladies selling curious aquatic victuals by the lakeside, Trakai has gathered a fair few bona fide restaurants of late. And besides hotels and guesthouses, it's easy enough to find private rooms - just ring the local tourist office for more info (see 'practicalities' below). 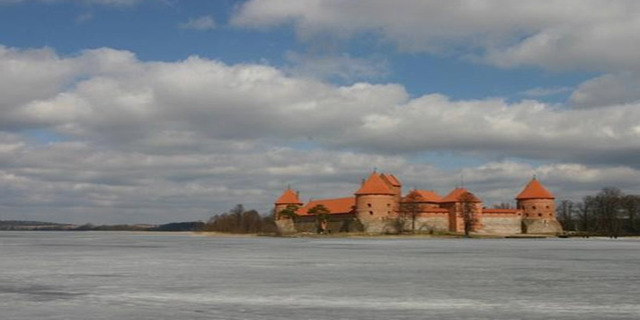 The focal street in Trakai is Karaimu, after the Karaite community that was settled here from the Crimea in 1397. It's an enchanting little stretch, chock-full of ornate wooden houses painted in cheerful pastel colours. But this picturesque promenade is more than just a pretty throwback to the multicultural traditions of Lithuania and Poland. The dwindling Karaite community lives on here. You'll find their house of worship, the kenesa, at 30 Karaimu Street - it's a little treasure. An equally evocative old cemetery is a short stroll away. And on a more epicurean note, there's even a modern Karaite restaurant by the lakeside - it's one of the most popular spots in town, and well worth a try (Karaimu Street 29).

However, by far the most famous of Trakai's attractions is the castle. It commands the island in the central lake in splendid style, and it's clear that the Lithuanians took a few notes from their dastardly enemies the Teutonic knights, as the edifice is almost indistinguishable from the formidable German fortresses of old. However, bear in mind that what you actually see is not exactly what was here in the days of Vytautas the Great. The medieval castle was rebuilt from little more than ruins in the 1990's. It'll take a fair few years before it looks authentic again. But lets not quibble, at least the castle stands.

All the same, one building that is very much the genuine article is the Tyszkiewicz palace, which lies a little further across the lake. What a place to live in that must have been...! The Tyszkiewicz clan played a prominent role in the history of the Commonwealth of Poland and Lithuania, but the war scattered the family in 1939. It's not possible to visit the interior of the palace these days, but the gardens are open to all. If you're feeling inspired, you may even be able to reach it by pedalo.

Getting to Trakai is both cheap and straightforward. Hop on a bus or train from the main stations. The train stop is slightly further from the centre of Trakai, but this won't cause too many problems provided you're not carrying too many elephants in your bags. For information on guest rooms, contact the Trakai information office at 69 Vytauto Street (8-528) 51934.

The castle is gorgeous and even just a stroll around the perimeter of the fortress is a worthwhile pleasure. 28km from Vilnius, it's only about a 20-minute drive if you have a car. Good place to spend a half day.