The Lower Castle in Vilnius

Resting at the foot of Castle Hill between the Upper Castle and the Cathedral, the Lower Castle is often referred to as the Royal Palace. It was the residence of the Grand Duke of Lithuania and the political, administrative and cultural heart of the Lithuanian State. Historically, the Upper Castle is associated with the era of Gediminas, Algirdas and Vytautus, while the Lower Castle bears association to the times of Sigismund the Old and Sigismund August, Queen Bona and Barbara Radvilaite. For it was during their time that Vilnius reached the peak of its prosperity and the Lower Castle became a centre of Renaissance culture. 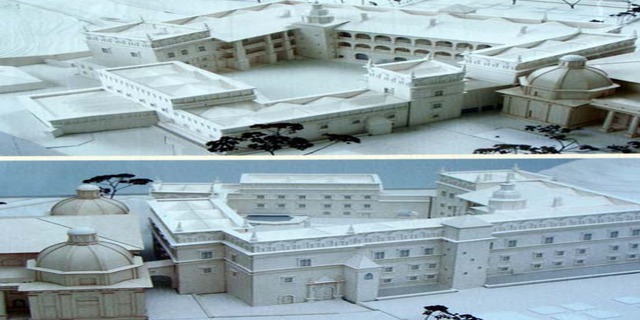 Models of the once-magnificent Royal Palace

In the second half of the 14th century, Sigismund the Old oversaw the completion of Vilnius' defensive wall. Half-stone and half-timbre, the wall rose 12m in height, was 2-3m thick and ran a full 3 kilometres in length from the Lower Castle along the present-day Liejyklos, Pylimo, Sv. Dvasios and Boksto streets till it reached the Vilnia river, whose steep bank protected the city from the east. The wall had 9 gates and 4 towers. 4 of these city gates were more than a kilometre long. The Subacius Gate was the most impressive - a proper medieval fortress, while the Medininkai, Gate of Dawn was the most famous. This wall survived until the 19th century when it was pulled down by occupying Russian forces (those ne'erdowells). Today only the Gates of Dawn and a few other scattered fragments of wall remain.

During the rule of Sigismund August, Vilnius truly peaked, thanks in part to his establishment of the royal court in Vilnius from where he ruled as King of Poland. This last representative of the Jagiellonian dynasty was sweet on Vilnius particularly due to his ); their courtship and ill-fated marriage is today one of the city's romantic myths.

Sigismund Augustus rebuilt the Lower Castle into a luxurious Renaissance palace and courtyard in the 16th century. With an excellent library (which later became the basis of the Vilnius University library), a theatre, choir, picture gallery, and tapestry collection, in addition to the administrative seat of the city, the Lower Castle was also the site of scholarly disputes, feasts, masquerades and theatre performances. There were also horse stables with over two-thousand horses, in addition to five bears, a lion and ten camels. When the post route from Vilnius to Krakow to Vienna to Venice was established in 1562, it represented a firm link between Vilnius and the cultural capitals of Western Europe.

On July 1st, 1569, the Lublin Union joined Poland and Lithuania into one state with an elected monarch in Krakow. This essentially doomed the Royal Palace. Though elected rulers were still called Grand Dukes of Lithuania, Vilnius was not considered a second capital of the new state and was visited on rare occasions. Its status slipped to that of a secondary city, though it continued to prosper. During the 1655-1661 war with Moscow, the Lower Castle was badly damaged and in the 19th century it was pulled down and essentially destroyed. Today a 15th-16th century house of the former castlekeeper has survived, as well as the 16th century foundations of the churches of St. Anne and St. Barbara. In 1986, the Old Arsenal was rebuilt on the former territory of the Lower Castle and houses the Museum of Applied Arts where the ambiance of Renaissance Vilnius can still be felt. The New Arsenal building was built in the late 18th century and renovated from 1958-65 to become part of the National Museum of Lithuania. The rest of the Lower Castle complex is currently under reconstruction and slated to be finished in 2009 for the city's celebration of the millennial anniversary of its mention in written documents.

When is Vilnius Lower Castle(Royal Palace) officially open? Thank you for your information.

This is the biggest active archaeological undertaking in Europe. Recently they found 62 silver coins at the site. They were buried two meters deep and apparently date back to 1387-1400. On one side is a likeness of Jogaila, then the ruler of LT. Cool.