Vilnius declared itself capital of a sovereign Lithuania in March 1990, but it was not until August 1991 that Moscow finally relented and recognised Lithuania as an independent country.

Vilnius itself had been a key city in this region of Europe for about eight hundred years. By the early fourteenth century it had become the capital of the Grand Duchy of Lithuania, and it's golden age came during the Renaissance, when the Duchy was an equal partner in a union with Poland, during which the Lithuanian royal dynasty presided over the two nations.

Placed at the heart of Europe (some geographers claim that Vilnius lies at the very centre of the European map) the city has often fallen prey to invaders. For most of the nineteenth century Vilnius was part of the Tsarist Russian Empire. And whilst Vilnius has retained a staggering amount of its architectural heritage, demographically, there have been major changes.

Today, approximately 60% of the city's population are Lithuanians, whilst 19% are Poles and 14% Russians. In medieval times, the upper classes spoke Lithuanian, and there were significant German, Belarusian and Jewish communities. During the Renaissance, Polish became the language adopted by the elite, a situation that survived until the 1930's, when Vilnius was part of the reborn Poland. The city's ancient Jewish population was liquidated by the Nazi powers during the Second World War, and the majority of the Poles were repatriated by Stalin when he created his Communist satellite states in 1944-46.

Today, Vilnius has a population of about 550,000, and it has gained a reputation as a cosmopolitan, safe and friendly city. 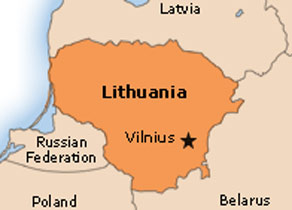 A flurry of countries burst onto the scene with the collapse of the Soviet Union, but this was not the first time that a sovereign Lithuanian state had appeared on the European map. For much of the Middle Ages, the Grand Duchy of Lithuania dominated a vast expanse of Eastern Europe.

The Lithuanians are Balts, and the main religion is Roman Catholicism, which although suppressed during the Cold War years, has made a comeback in recent times. Lithuania is the largest Baltic nation, and it is divided into ten counties, with a 100 kilometre coastline in the northwest. The majority of the country is relatively flat, but the gently undulating landscape of the west endures as a classic Lithuanian image, as do the country's many lakes.

Lithuania's destiny has been closely intertwined with that of Poland, and in 1385, a personal union was signed between the two countries. Although Polish became the language of the gentry, the nobles tended to regard themselves as 'Gente Lituani, natione Poloni.' (Lithuanian origin, Polish nationality). From time to time an ambitious magnate considered seceding from the 'Commonwealth of Two Nations,' as it became known in 1569, but the union survived until the 1795, when the state was wiped off the map by Russia, Austria and Prussia.

A renewed interest in the Lithuanian language, which had by and large been kept alive by rural folk, grew steadily throughout the nineteenth century. Cultural repression by the Russians further heightened the desire to salvage ancient traditions. A significant portion of the emerging middle class in the towns rallied to this Lithuanian identity, but in Vilnius the majority remained Polish speaking.

A new Lithuania was born after the First World War, but friction occurred with the freshly independent Poland, largely due to claims over Vilnius. After proclamations from both sides, General Zeligowski seized Vilnius for the Poles. Kaunas became the Lithuanian capital, and relations between the two countries were by and large suspended.

The Second World War changed the face of Lithuania. The ancient Jewish community, which had been present for over eight hundred years, was largely annihilated under the command of the Nazis. The Nazis endeavoured to play the occupied communities off against each other, with tragic results. Meanwhile, the Soviets had been responsible for deporting large numbers of the Polish, Jewish and Lithuanian intelligentsia in 1940-41. When the Soviets returned in 1944 they absorbed Lithuania into the Soviet Union and encouraged the repatriation of most Polish speakers to the new Poland. Vilnius became the nominal capital of Lithuania, but Russification began immediately.

The Lithuanians liberated themselves from the Soviet Union in 1991, and the country soon became a leader in the region. The democratic system was adopted relatively smoothly, and in the first wave of EU Enlargement in 2004, Lithuania was amongst the 10 countries chosen.

I needed this information for my essay thx!

i was born in lithuania

r u from vilnius?

Could you please let me know, how much does it cost to park at the Vilnius airport car park per day.

Is there any medical requirements to go to Vilnius, Lithuania. What is your currency exchange? Whats the weather like at the end of august beginning of September? And what are the do and Don't s?

Yeah sure, before you travle to Lithuania, you shoug get vaccines for Yellow fever, Hepatitis A, Typhoid and Malaria (You will also need to take prescription medicine before, during, and after your trip to prevent malaria). A gun would be a good defence against the big bears who are running freely around the city. We dont really have currency, we like to exchange the things. The weather in September is around 0 degrees celsius - so quite warm and nice outside. Oh and dont forget to nring loads of candles or a torch with you as we dont have electiricity. Cheers Rasa

Hello! A few years ago my sister and I visited Vilnius. We went to Uzupis and saw the Constitution. We saw the currency, but were unable to find where we could purchase some. Do you know if it is possible to get any? My one regret for not trip is that I was not able to find it as I think the currency from Uzupis is fabulous! -Renee

I want information th road from airport to city gate hotale. where I will attente confirance in the city

Thanks for the ill info!