The Centre of Europe

Inexplicably, in 1989, some French scientists with lots of funding and little of use to do declared the geographic centre of Europe to be located at 54 degrees 51 north and 25 degrees 19 east, pinpointing the spot 26 kilometres north of Vilnius. Apparently, this has been a popular exercise for centuries and Poland, Germany, Ukraine, Slovakia, Belarus, Czech Republic, Estonia, and even Norway (dear sirs, you are out of line) have finagled a way to make a claim on this absolutely inane title. The Lithuanians, for their part - having won this very French game of pin-the-tail-on-the-donkey - applauded themselves, thus making the unsound correlation that being the geographic centre of Europe, must in turn make them the cultural centre as well (an argument they surely used to win hosting honours for 2009's 'culture capital' ceremonies). So it was that they determined to make a tourist destination that would "bring their idea of Europe to life."

Upon a visit to the site, located in what is now a forested nature preserve near the village of Purnuskes, no physical evidence of the axis that the whole planet rotates on can be found. Unfortunately there's no swirling vortex, black hole or "Mystery Spot" at the centre of Europe, nor do cars roll uphill or levitate. There's no tunnel into the depths of the earth, interdimentional portal or wrinkle in the fabric of time and space. There is a lake with no restorative or omniscient powers, and a field where no UFOs or asteroids crash-landed. There's also a commemorative stone that visitors are encouraged to touch so they can say they touched the centre of Europe, but didn't have any inspired visions or receive any powers of divination. Each visitor to the Museum at the Centre of Europe also gets a personal certificate immortalizing the moments they spent there. In 2004, a monument designed by Lithuanian sculptor-of-reknown, Gediminas Jokubonis, was erected at the site. A large white granite column with a golden crown of stars at the top, it is by far the most impressive of the five known monuments across Europe marking the centre of the continent, however central Krahule, Slovakia's "Hotel Centre of Europe" is a much larger structure (it's the truth people).

Egging the face of Lithuania's tourist industry to some degree, those very same French geographers have recently re-evaluated their prior claims and suggested that perhaps they erred in their previous calculation of the hotly-contested centre of the continent. Turns out the actual centre is 6 km closer to Vilnius at the site of a French creperie (okay, there's no creperie, but there's certainly some waffling going on here, no?). 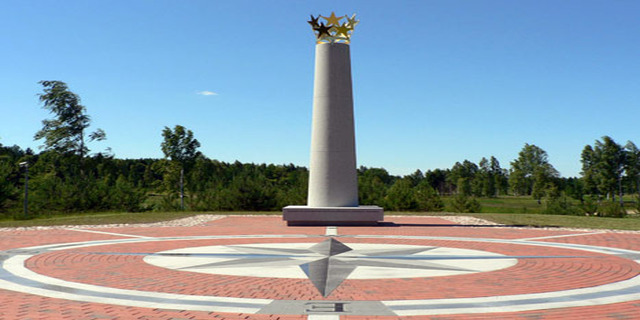 You're just 6 kilometres away from the Centre of Europe!

Softening the oops-factor is the fact that the new geographic centre lies somewhere between the two tourist attractions observing it (though it could easily relocate itself again): just 17 km away is Europos Parkas - 'Open Air Museum of the Centre of Europe.' This grandiose park was created out of the vision of Gintaras Karosas, with the intention of giving artistic significance to the centre of Europe. Initiated when Karosas was a nineteen year-old art student, he found an ideal location (and a piles of money, apparently) 17 kilometres from the first French estimate and began cultivating the site to fit his interpretation of what the centre of Europe could mean: a large, open-air sculpture park, presenting the best of Lithuanian and international contemporary art. Born in 1991, when Karosas placed the first sculpture at the site, today Europos Parkas is the only modern sculpture park in Lithuania and the only site of its kind at any of the currently recognised seventeen-odd geographic centres of the European continent.

Covering 55 hectacres, Europos Parkas displays almost one hundred works of art. 27 countries are represented by the artists whose work is in the park, and much consideration goes into the location of each piece to ensure a sense of harmony with the environment, it's natural features and light patterns. In 1996, a contribution by American conceptual artist, Dennis Oppenheimer, bolstered interest in the park, which also holds works by Sol Lewitt and Magdalena Abakanowicz. However, the park's grandest and most talked-about piece is by Karosas, the park's founder, and is even registered in the ever-expanding Guinness Book of World Records as the "largest artwork made of televisions sets." Composed of over 3000 TVs donated by people from all over Lithuania, the sculpture covers 3,135 square metres and weighs about 150 tons. A sprawling labyrinth of old TV sets with a toppled statue of Lenin at the centre, the sculpture speaks of the absurdity and ineffectivenesss of a half-century of Soviet propaganda, and looks like a tree when viewed from the air.

Ironically, Europos Parkas also has its own 'Centre of Europe' artpiece by Karosas, also with a stone in the centre. Pavers are laid radially around the stone in the direction of each European capital with the distance of that capital engraved in them. Further confusing the issue, and revealing Lithuania's own seeming indecision over the precise centre of Europe (bored with this idea yet?) is the availability of a different personalized COE certificate for purchase in the obligatory souvenir shop.

The beauty of the park's landscape makes a wonderful backdrop for the many imposing sculptures and Europos Parkas is an ideal place for a picnic or stroll through the woods on a nice day. On the downside, Park of Europe is almost impossible to visit using public transport, and it's not a cheap date: a normal ticket is 18 litas.

Getting to Europos Parkas:

To reach the park by bus, take trolleybus 10 north up Kalvariju to the Zalgirio stop. Here you can either transfer to a bus marked for Skirgiskes, which will take you directly to the park, or get on bus 36 and take it to the end of the line. From there, it's a 3 km trek to the park and you'll have to ask the driver which direction to head.

To reach the park by car, go north from downtown Vilnius via Kalvariju to the Santariskes roundabout and go right toward Green Lakes (Zaliejiezerai), following signs for the park...

The park is open daily from 9 to sunset. Bicycles can rented at the administration building (near the restaurant and souvenir shop) for 10 litas an hour.