Kings and Queens weren't supposed to marry for love. That much we've always known. But shielding them from cupid's arrows was no walk in the royal park - when the barbs flew, it was rarely between the betrothed. Such was the lot of the crowned.

Or was it? In reality, there was a third way. Affairs were mostly tolerated, provided that they were carried on discreetly. Such dalliances were often encouraged.

But what happened when the world really did turn against the smitten couple? Could love still triumph over the odds? Did duty dictate the only honourable conclusion? Can we slip in one more glorious cliche?!

That's right dear readers, we've entered that heady realm - the realm of burning pledges and clasped bosoms. It's been a favourite of minstrels and melodrama-mongers since time immemorial.... We all know how King Arthur's best chum ran off with Queen Guinevere. And Austrians still sigh over Prince Rudolf's tragic tryst at Mayerling. Yet of all the ill-starred royal romances, the tale of Barbara Radziwill and her King remains amongst the most moving. It's also one of the least known. We say least, but by that we mean on the international stage. For the tale of Barbara Radziwill is legendary in both Lithuania and Poland. It's inspired poems, myths, paintings and a fair few films as well. So without further ado, grab your kerchief and settle into your throne, for here follows a true tale of love, betrayal and one of the most malicious mother-in-laws in history.... 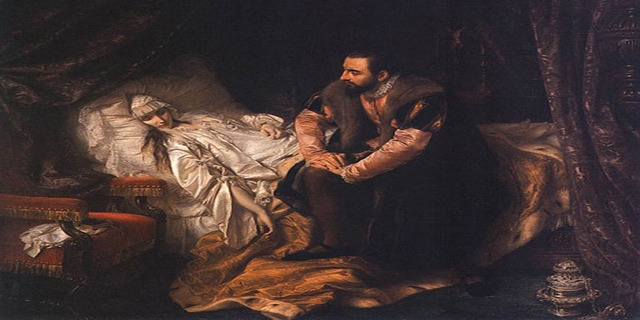 Our tale begins in the 1540's. At that time, Michelangelo was designing the dome of St. Peter's for Pope Paul III, and here in Vilnius, a young prince was cultivating his own glittering court. Sigismund Augustus was a man of dashing looks, as well as a poet, a humanist and a champion of religious tolerance. He was also heir to one of the most powerful states in Europe, his father being King of Poland and Lithuania.

In 1543 the Prince was married to Elizabeth of Habsburg. Sigismund had already been Vice-Regent of Vilnius for fourteen years, and the city was enjoying its golden age. The Prince embellished the Royal Castle, furnishing it with a theatre, a choir and a picture gallery, replete with exquisite Flemish tapestries. Full of fantasy, he kept five bears, a lion and ten camels, as well as an extensive stable. Meanwhile, local nobles strove to keep up - palaces, printing presses and churches sprung up across the city. But in spite of this prosperity, not all bode well for the king-in-waiting. He was the sole heir of the Jagiellonian dynasty, the crucial link in the twin state of Poland and Lithuania. What's more, it turned out that his Austrian bride was epileptic, and after barely two years of marriage she fell from a horse, fatally injured. She died childless.

The Prince would have to remarry - that was beyond debate. The problem was, the girl who came on the scene was not the one everyone else had in mind. In fact she was quite the opposite.

The Prince had fallen head over heels for a Lithuanian lady named Barbara Radziwill. She was a young widow from one of the grandest families in Lithuania. According to letters of the time, she was amongst the most beautiful ladies in Europe. But the Cracow court was dead against the match. And not only were the senators and the King furious, so too was the Queen, the terrifying Bona Sforza. Rumours had it that Bona, an Italian by birth, had used her Macchiavellian skills to poison the epileptic Habsburg for failing to produce a child.

Yet such was Sigismund's passion that he did the unthinkable and married Barbara in secret in 1547.

All hell broke loose around the couple, a situation that was exacerbated by the death of the old King in 1548. Parliament demanded a divorce, and all kinds of mud was thrown at the twenty-eight year old princess. Barbara was cast as the wicked Wallace Simpson to Sigismund's Edward VIII. The charges came thick and fast - that the marriage was illegal, that Barbara was a woman of easy virtue, and above all that she was incapable of childbirth. Yet Sigismund stood firm.

King: I wish that all people enjoyed true freedom of loving. I cannot break my marriage vows without offence to my conscience... There are no genuine grounds for divorce...

Archbishop: Your Royal Highness, grounds for divorce could be found.....

King: No doubt they could - if I were a man of ample conscience, but such I am not....

Envoy: It diminisheth us, Your Majesty, that you should have taken as your wife a woman from such a family....

Whether or not Barbara was guilty of the insults hurled at her it is difficult to surmise. But the gentry, proud of their democratic privileges, were certainly furious that the King should have gone over their heads, ignoring parliament and marrying the daughter of a magnate. And in Queen Bona's eyes, a Lithuanian lady was no dynastic match compared to a Habsburg or Bourbon princess.

Yet after three years of wrangles, the young King pushed through the coronation of his bride. It was a triumph over all the odds. But just five months later, Barbara was stricken by a terrible illness.....

Sigismund was distraught. Once again, the rumours circulated that Queen Bona had been up to her poisonous tricks. (Until this day, historians cite the charge of foul play). The young King did everything he could to save his bride. But to no avail. Barbara breathed her last at Wawel Castle on 8th May 1551.

The King was inconsolable. According to her dying wishes, Barbara was to be buried in Vilnius cathedral, and the King set off with the cortege on the huge journey to Vilnius. He would wear black for the remainder of his life.

It might seem that the tale is now told. But not all the strings in this story have been tied up yet. No, no. For one, Queen Bona was to get a taste of her own medicine in the end. She organised one more marriage for her son, marrying him to a second Habsburg princess, Catherine, the sister of his first wife. But the marriage was both soulless and childless. (The Primate of Poland himself went down on bended knee to persuade Sigismund to see to his wife, but the King had lost interest). Bona would later flee Poland after falling out of favour at court. She hid herself away at an Italian nunnery, but her past followed her, and she died of poisoning in 1557.

Years later, after pushing through the grandest act of his career - the complete and equal union of Lithuania and Poland (1569) - Sigismund retired to the remote castle of Knyszyn. Henceforth kings would be elected to a joint throne. Sigismund finished his days on 7th July 1572, surrounded by a motley company of quacks, astrologers, and witches, in a room hung in black in memory of Barbara Radziwill."

* Many legends emerged around the saga. One of the most enduring is that the King attempted to conjure the ghost of his bride with the help of wily sorcerer Pan Twardowski. A mirror used for this magic survives at the village church of Wegrow, Eastern Poland.

* Barbara Radziwill's final resting place can be found in the vaults of Vilnius Cathedral, whilst Sigismund Augustus can be tracked down at Cracow's Wawel Cathedral.

* The pre-war Polish film 'Barbara Radziwillowna' won a prize at the Venice Film Festival (1937). Also known as 'Love or a Kingdom', it was the first of many screen versions, rivalled by Janusz Majewski's raunchier colour effort, 'An Epitaph for Barbara Radziwill' (1983).

* The preferred mode of transport for noble necromancer Pan Twardowski takes some beating - he flew about on a giant cockerel.....

A lot of thanks for all your valuable labor on this blog. My daughter enjoys making time for investigation and it's really easy to understand why. Many of us know all of the powerful method you present precious tactics via your web site and therefore recommend participation from some others about this content so my princess is always studying a lot of things. Take advantage of the rest of the new year. You have been performing a first class job.