Bankas, baras, klubas, restoranas, sportas - it sounds easy enough. However, at this point, sadly we have to shatter the illusion and confess that Lithuanian is actually trickias indeedas. We know that you can travel to Spain and pick up the lingo in a month or so, but you'd have to be a veritable genius to do likewise in this neck of the woods.

That said, there's no reason why you shouldn't master a few of the basics. It's not that difficult. You'll be heartened to hear that in the overall scheme of things, Lithuanian is nowhere near the top spot in the world's most difficult languages (as it goes, Hungarian and Japanese stole the show in a survey by the bods at the British Foreign Office). So it's time to prepare for Mission Vilnius and crack those cretinous tongue-twisters! 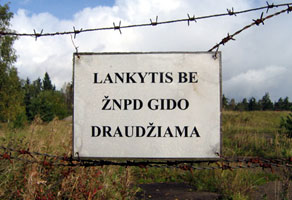 There's a famous Monty Python sketch where a dastardly writer is sued for creating a wildly misleading phrasebook. Tourists had found themselves asking highly unsuitable questions when all they were really after were directions to the train station. We assure you that all the words below are absolutely genuine, and unless a virus has got into the system, nothing unseemly is included below. Trust us - you'll be speaking Lithuanian in the blink of an eye! Kavine - Cafe
Kava - Coffee
Arbata - Tea
Vanduo - Water
Sultys - Juice
Vynas - Wine
Alus - Beer
Stotele - Station
Traukynas - Train
Vaistine - Chemists

Below you'll find a few of the most basic words to get you started. It's true that English is now widely understood in Vilnius, but the locals will always be delighted to hear you have a bash at their own language. The older generation was of course obliged to learn Russian, but it's not the favourite language with the locals, as it brings back bleak memories. Similarly, you can often make yourself understood in Polish, but you'll be most popular by trying you're luck in the local tongue.

Sveikas is usually said to a friend/family member (pretty much anyone that you know), but the trick is that the ending 'as' means that the word is like he/she in English, so you can only use 'Sveikas' referring to a male. However if you say it to a female you'll say 'sveika'. If you want a simple way to change the "gender" of the word that ends with 'as' or 'a' just swap those endings and you're good.

As tave myliu or As myliu tave means exactly the same- I Love you.

Danga, a "chemists" or a "chemist" is European English, aka British English, for pharmacy.

Vaistine does not mean chemists ... it basically means pharmacy

sveiki also means healthy. sveiki you say to group of peoples or in formall hello. sveika(s) is one person.

Nothing 'clicks' to listen. Also, mother, father, grandmother, etc. would be helpful to let people know your family members are from there. Thanks

I was wondering if someone could tell me what the translation of the word sveikis is. I've read that sveikas is hello. Is there a difference with the (is) and(as) ending?

my friends have taught me lithuanian. sviekas mean healthy i think. as if you would be referring to a healthy food.

this site is horrible... some of the translations are way off! i mean they vaguely mean the same thing but there are better ways to translate it. Vaistine means a pharmacy (chemist as per website) now that i went into the comment page i don't remember others but geesh. People are ether trolling or just using google translate :)

Dear Sir / Madam, We are an English school looking to translate a few documents from English into Lithuanina for our Lithuanian students. We do pay if you are accurate and fluent in English and lithuanian. Please advise asap or pass on to someone who may be interested- we are looking urgently. jad7892003@yahoo.co.uk

You know what....I have been in Vilnius for 6 months and this place is very racist, to religion, colour, you name it. I just don't understand how will I stay another year in this city..and dont get me started about ppl in kaunas

why would you ever go here? the place is highly racist and antisemitic

I highly recommend the "Lithuanian Out Loud" podcasts to anyone interested in learning the language. Go to http://lithuanian.libsyn.com/ and select "Language Course" to start from the beginning...

ok I wanna learn some useful Lithuanian as well and give some good surprise to my Lithuanian friend Edvinas Sirutavici, he'll be happy to hear me speak in his language

"kas pas tave gero" is kinda like "what's good" smthn' like "what's goin' on" u know...it has nothin' to do with drinking or anything like that =D common people,get serious, don't try to confuse others ;)

this was helpful.but more words and sentences would surely be appreciated.I AM OF Lith,heritage.

Damo - 'Kas pas tave gero' means 'What do they drink at your [place]'.

I am learnign Lithuanian what does Kas pas tave gero? mean

My great grandmother and grandmother have always said As myliu Tave and told us it was I love you. I have looked this up and get conflicting answers most of withch switch the last two words. Is this something that can be said either way? My grandmother is sick and it may be something I put on her tombstone or a flower arrangement but want to get it right, or hope that she has been right. Thanks for your help with this. Brian

Can anyone out there help us with recordings of the above phrases in good, spoken, Lithuanian? If anyone is able to help (someone with a clear speaking voice and some recording eequipment!) please contact us at Vilnius Life so we can add these to the site. Drop us a line at info@vilnius-life.com and we will contact you about how to do this! Many thanks, the Vilnius Life team

Are you still a virgin? = Ar tu dar mergelė?

please i would like to no more like when u wanna say to ur lady,i love u,where are u,things that have to do with love thanks!!!

It's very interessant. Could you say something more than "this is a dog's life" and "good night, good morning, cheer up ?" Thaank yoou.

Here's a few more words and phrases I found useful when I was there. You'll never be able to pronounce them (especially without seeing the LT characters), but it's a start, right?:
Geras - Good
Labai geras - Very good
I Sveikata - Cheers!
Skanus - Delicious
Myliu - Love
As tave (labai) myliu - I love you (very much).

From the Uzupis Constitution:
Suo turi teise myleti ir globoti kate. - A dog has the right to be a dog.
Nenugalek - Do not defeat.
Nesigink - Do not fight back.
Nepasiduok - Do not surrender.

Also, 'Viso Gero' is a better one to learn for 'Goodbye.' 'Iki' is more like 'see you later' and should only be used with friends. It's polite to say 'Viso gero' to shopkeepers as you exit (and it's pronunciation is straightforward--go for it).

i wil love to be in luthuania.

it's really useful. Could you write some more sentences, such as "good morning¡Bafternoon¡Bnight", and so on? Thank you!