The Upper Castle in Vilnius

The oldest part of the castle complex is the Upper Castle, built upon what is known as Gediminas Hill - a 40 metre high bulge in Vilnius' topography. Archaeological research concluded that the site has been occupied since Neolithic times. The first defensive walls were built of wood and erected in the 9th century and in the 10th century, a wooden castle was built. Gediminas designated Vilnius the capital city in the 13th century, during which the castle was improved and expanded. It's fate, as is fitting, lay largely in the complicated history of the country.

Gediminas' two eldest sons, Algirdas and Kestutis, enjoyed a pleasant relationship, but the same can hardly be said of Algirdas' son Jogaila and Kestutis' son Vytautas. After King Algirdas' death, Jogaila stole the throne from from his brother Kestutis, imprisoning Kestutis and Vytautus in the Castle of Krewo. Kestutis perished there, but Vytautus escaped to do the revenge thing and wage war against Jogaila. Meanwhile, the Christian Orders were already waging their over two and a half centuries long war against pagan Lithuania in a neighborly effort to catholicise them, attacking Vilnius Castle in 1365, 1375, 1377 and 1383 to no success. In 1385, Jogaila signed the Krewo Union, agreeing to marry the Polish princess Jadwiga, christen Lithuania and unite the two states. In 1387 Jogaila destroyed a pagan temple and built in its place the first incarnation of Vilnius Cathedral, expanding the castle complex and beginning the process of Lithuania's christianisation. 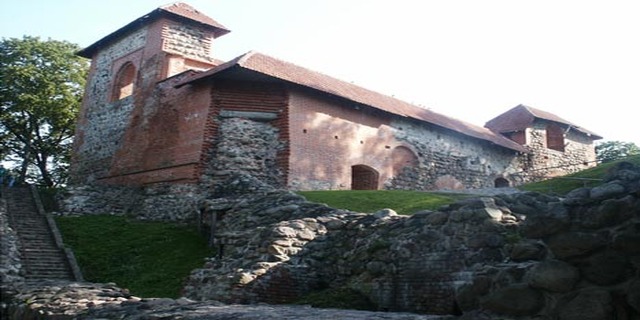 Remains of the Upper Castle on Gediminas Hill

In 1390, Vytautus decided to join the efforts of the Teutonic Order in assailing Vilnius and spiting his cousin. Aided by Vytautus' army, English, French, Italian and Flemish knights, the Teutons were able to launch a decisive attack which burned down nearly the entire city and destroyed the Crooked Castle, but failed to capture the rest of the castle complex and was ultimately a failed campaign. Two years later Jogaila moved to Krakow to take the Polish throne and set-up shop in its Wawel Castle. Vytautus took Gediminas' former position, was titled Grand Duke of Lithuania and made his peace with Jogaila. Despite Vytautus' conversion to Christianity and the beginning of the process of christianisation (it would be one of the longest in European history), the Teutonic Knights had been trying to conquer Vilnius for so long they kept at it. In 1394, the city was besieged for three weeks, during which time one of the defensive towers tumbled into the Neris river, before Vytautus managed to drive them from the city. A similar attack in 1402 also failed to take the castle complex, after which Vilnius enjoyed a peaceful period of development for two and a half centuries.

With the inexplicable peace, Vytautus set about rebuilding the Upper Castle and fortifying other buildings in the castle complex. From his time with the Teutons he had learned a bit about castle architecture and adopted it into his new castle design. The new Upper Castle was reconstructed in Gothic style with snazzy green-glazed tile roofs. The Upper Castle keep hall was the largest hall within the complex at 10 x 30m; to give a bit of perspective for regional castle buffs, that's slightly smaller than the hall of the Grand Master's Palace (15 x 30m) at Malbork (outside Gdansk) and much bigger than the hall at the Duke's Palace (10 x 21m) in nearby Trakai Castle. A 320 metre long defensive wall with three towers was constructed around the castle and the three-story Royal Palace was also built along with other buildings at the foot of Castle Hill. Castle reconstruction was completed in 1422 and the hosting of the coronation of King Vytautus the Great was planned, however this historic event was undermined by his untimely death. The present-day remains of the Upper Castle are from Vytautus' era.

After the age of Vytautus, the Upper Castle was largely neglected as Sigismund as his offspring turned their attentions to the Lower Castle. In 1654, Russian tsar Aleksei Mikhailovich (Peter the Great's father) went to war against the Polish-Lithuanian Commonwealth (as it was known). The Moscow army invaded Vilnius in 1655 - the first time since the Teutonic Knights that the city was attacked. More than ten thousand Vilnius residents were killed, fire raged for 17 days, and that castle on the hill finally fell for the first time in its history. Six years later, the Polish-Lithuanian army managed to retake the castle, but it was just never quite the same and stood abandoned.

Of the castle's towers, only the Western Tower remains today, called Gediminas Tower. Further damaged during the World Wars, it was renovated from 1956 - 1960 (though not to its original four levels), and now holds a museum detailing the structure's history. You no longer need to climb the long, twisting, cobbled path to reach the iconic tower (but you should anyway). A nifty, modern funicular (2 lt) will take you those daunting 48 metres to the top, saving you energy for the 78 steps within the tower to its outstanding parapet where you get a sweeping view of the spires of the Old Town, the Three Crosses and the valleys of the Vilnia and Neris Rivers. Gediminas Tower has traditionally been the site from which occupying forces flew their flags, but since 1988 the Lithuanian tri-colour has once again been flying proudly over the city.

There's some really good information on this page--thanks. Too bad the castle couldn't be maintained and never got to be the properly revered royal castle it should have been...