Exchanging money in Ljubljana is as easy as spending it - just look for a sign that reads 'Menjalnica' or 'Exchange.' Avoid exchanging your money in…

Above: Train-hop to the castle Below: You should be so lucky!By Air Ljubljana has its own airport in name, although Ljubljana-Brnik…

Above: Should I stay or should I go now? Below: On yer bike!By Taxi Hmmm, what can we tell you about the taxi experience in and around…

You won't have any problem paying by credit card in most shops, as this is the preferred method of most Slovenes, but for little things like a coffee…

Most Slovenes, particularly the younger ones, speak a very, very, very high level of English, but that's no excuse not to try and impress the locals…

Ljubljana has always been Slovenian, despite the fact that an independent Slovenia has only existed since 1991. The struggle for independence lasted… 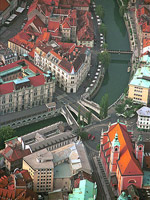 Above: Aerial view of the Ljubljanica, Triple Bridge and Preseren Square
Below: The columns of Plecnik's colonnade 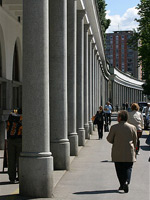 Easily among Europe's most darling capitals, Ljubljana may be bereft of big-name attractions, but its overwhelming hospitality, outstanding architecture, atmospheric bars, bustling nightlife and cafe culture make it an incredibly easy place to get comfortable. With a towering hilltop castle, charming old town centre, stylish student community and vibrant street culture centered around the cafes and bridges of the sunlit Ljubljanica river, those lucky enough to have visited Ljubljana tend to fall in love and linger.

Ljubljana Castle is hard to ignore, regally hovering over the city. As the city's most overt attraction, visitors tend to start here, and why not? The vantage over the town will certainly help you get your bearings and the gorgeous view of an alpine horizon over Baroque and Art Nouveau masterpieces is certainly inspiring - as is the castle's pastiche of styles and 3D 'virtual museum.' Entrance to the ramparts and courtyard of the castle is free, but a superior 360 degree view is afforded for those who climb the 19th century tower. From the castle there are many lovely hiking trails through the woods for those with a little wanderlust, all of which inevitably lead back to the river and Old Town.

The three interweaving town squares wrapped around the foot of the castle bluff are arguably Ljubljana's greatest overall attraction. Dappled with cafes and ideal for people-watching, you'll find yourself strolling through this area again and again, soaking up the atmosphere and admiring the architectural gems of Ljubljana's favourite son - celebrated architect Joze Plecnik, whose indelible stamp is all over his native city. Between Plecnik's Cobblers' Bridge and the city-signature Dragon Bridge, the main sights include Town Hall and its impressive Baroque fountain, the Cathedral of St. Nicholas, and Plecnik's Market - a monumental colonnade brimming with shops and food vendors. Plecnik's elegant Triple Bridge, with its pedestrian appendages, leads directly into Preseren trg - Ljubljana's main square whose features include the monument of Preseren - Slovenia's most famous poet, several Art Nouveau facades and the Franciscan Church.

Ljubljana's Tivoli Park brings lush forest right into the city centre and also houses a couple mansions. The nearby National Gallery is an essential stop for culture vultures, as is the Modern Art Museum. After nightfall, there are plenty of clubs, bars and riverside haunts, but if you're feeling particularly brave take a trip out to Metelkova. Formerly a military garrison, this area was claimed by squatters after independence and now hosts regular parties, DJs, film screenings and we can only guess what else. A visit after midnight is recommended for the adventurous.

Once you've made the most of Ljubljana, don't forget that the rest of Slovenia is one of the most naturally spectacular countries in Europe - small enough that it's amazing karst caves and Julian Alps are easily within reach!

The Cobblers' Bridge is the third of Ljubljana's popular thoroughfares over the Ljubljanica river which the city's street life centres around. Formerly a wooden bridge connecting Mestni trg (Town Square) and Novi trg (New Square), the original Cobblers' Bridge featured space for cobblers' workshops (hence the name) and hosted a statue of Christ at the south end which has been relocated to St. Florian's Church.

I really like this little city, but there's not a great deal to keep you here for more than a long weekend. It is great for a short break.

Europcar Cliff : Absolute disgrace from start to finish..Surly and aggressive agent..Made me sign for a full tank even though it was nowhere near full..claiming the car gauge was faulty...and that he had personally filled it before the rental. bullshit!! Went straight to a petrol station and put 18 euro in which didn't even fill it..Took it back with much more fuel than I was given to be told they would charge me as it wasn't full. Fortunately...I took photos when I picked the car up and had receipts ..and we'll when the agent realised I wasn't going to be done..he changed his mind. What a surprise First and last time to use Europcar anywhere. ..but definitely at Ljubljana Airport.Have rented 40 cars in Ljubljana and ALL other hire companies have been great and charming But Europcar .NEVER again..Your have been warned ... .Be aware ..Don't rent with this outfit Airtrail Slovenia Ahmad: Very good airport transfers service in Slovenia! Airtrail Slovenia Marina : Very useful during COVID 19 lockdown. Helped me a lot getting my daughter home. Taxi Metro Tomaz: Waiting for one hour and guy at dispatch center was very rude. don't use it, use instead Rondo or Laguna taxi