Most Slovenes, particularly the younger ones, speak a very, very, very high level of English, but that's no excuse not to try and impress the locals by showing that you have at least tried to learn some of their lingo. Believe us, a few learned Slovenian words will go a long way to making a Slovenian's day, and will usually guarantee you better, friendlier service.

We're not going to lie to you, Slovenian is one of the most difficult languages in the world to master. You never know where the stress will fall on any given word, so although you may start to recognise certain words that you see written around the place, actually saying them will be an entirely different proposition!

Even so, it is possible. So, put down your copy of Vogue or FHM, pick up your Slovene phrasebook, and get ready to reap the rewards. Ok, so you probably won't be able to sit down and debate the Slovenia-Croatia territory dispute, however you might just make a new friend who will teach you how to roll your 'r's and pronounce your ''s! 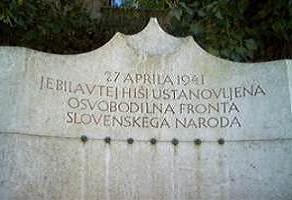 There are a whole range of Slovenian words which look pretty similar to their English equivalents, so signs such as POLICIJA, RESTAVRACIJA, HOTEL and TAXI aren't going to baffle the brain too much (-statement not legally binding!!) But here are a few that might: Kavarnica - Cafe
Cajni hia - Tea House
Knjigarna - Book Shop
Trnica - Market
Trgovina - Shop
Trafika - Newsagent
Postaja - Station
Letalice - Airport

The Slovenian language uses the same Latin alphabet as English, however you will find a few extra letters (familiar with an additional v on top of them), bringing the total to 25. A few letters you won't find are: q, w, y, and x. The only exceptions to this rule are direct translations from other languages (e.g. "boutique') and, of course, slang and marketing-language.

We've got some great ideas for this section. In the future, be prepared to see an extended dictionary and even an audio pronunciation guide! If you've got some good ideas on how to make our language section better, let us know!