When Slovenia accepts the reins of the European Union on January 1st, 2008, it will be the first member country admitted in the 21st century to hold the rotating six-month presidency of the 27-nation group (taking over the managerial duties of Lisbon, Portugal). Not only that, but Slovenia will be the smallest country to lead the EU, Luxembourg notwithstanding (who?). Given the European and global attention that come inherent with the role, Slovenia is eager to take on the costs and challenges of the six-month position and prove it is up to the task. 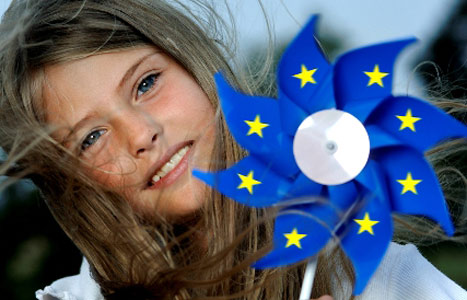 Slovenia: Darlings of the EU

62 million euros (let it sink in...): that's what the country's six-month stint as EU skipper will cost. Most of that money will go towards various facility investments (particularly near the diplomatic centre in Brdo, and in Bled, Portoroz, and Ljubljana), hiring translators and interpreters (Slovenian never caught on as the language of European diplomacy), and hiring additional civil servants. It's quite a chunk of change to spend on a publicity package (well-sold by the EU), but Slovenia is keen to have its national image spread worldwide, and curious to see how far its strikingly good looks can get it.

With a rather paltry population of merely 2 million, Slovenia has fewer civil servants than any other major European member (ie. all member-countries large enough for their name to fit inside their territory on a map). As such, there are some fears that the country will be slightly 'understaffed' so to speak when it comes to smoothly organising and overseeing the 4000-some meetings and eight ministerial gatherings of the EU presidency, to say nothing of all the barbecues, ice-cream socials, BINGO and quiz nights (right?). But, honestly, what does presiding over the European Union actually mean?

There are basically three sets of tasks whose responsibility moves from Lisbon to Ljubljana on January 1st: 1) Managing the work of the Council of the EU and the European Council, 2) representing the Council of the EU before the various other EU institutions and 3) representing the European Union before the international community. It's essentially Slovenia's job to mediate between the European Commission, the European Parliament and the 27 member states of the EU; getting them to cooperate and fostering solutions that take all parties into consideration for whatever issues are on the table.

Though Slovenia won't be privy to any special executive powers, the EU presidency is generally regarded as a good opportunity to influence the agenda of the EU. As the only member of the former Yugoslavia in the EU club, it's no surprise that a top priority of Ljubljana's agenda will be the Balkans. Not only does Slovenia share cultural and historical ties with the other nations of the former Yugoslavia, they are an important destination for Slovenian exports and investment. Ensuring their peace and prosperity is a no-brainer in Ljubljana. As such, Slovenian prime minister Janez Jansa and foreign minister Dimitrij Pupel will aim to advance EU expansion in their backyard, particularly to neighbour and member candidate Croatia.

Slovenia's EU presidency comes at an important juncture for the Balkan countries with regard to EU momentum. While the EU is officially committed to admitting the Balkan countries once they have met the necessary membership criteria, enthusiasm for this objective is certainly flagging. In fact, outside of Slovenia itself, Balkan EU membership is becoming less and less of a priority for existing EU members already suffering from "enlargement fatigue." Of a particularly prickly nature is the Kosovo issue. While almost all member countries are in favor of an independent Kosovo, there is debate about how it should be achieved and how much the EU should be involved in the matter. Though Jansa and others are in favour of fast-tracking Serbian membership, bribing Belgrade in this way is unlikely to help them swallow the pill of an independent Kosovo. Regardless of the complex Kosovo issue (the thought of really getting into it is already exhausting), Slovenia's ability to unite EU members in their approach to the Balkans will be the key to the personal success of their EU presidency.

It is amazing how Slovenia was leading the EU gang and intregal part of it doing the biding of the big members and most of all EU Brussels for Kosovo. Trying to convince even Russia that Slovenian as EU president its policies for Kosovo are for the best and the so called high ground of the European way meaning Brussels self serving ways. Now they are spooked panicked and scared what will happen to Slovenian investments in Serbia if their is a organized boycott of its company's. I am soo dissapointed in EU. On Croatian side of the Adriatic Sea Croatia has every right under international law of the sea to implement it protected fishing and ecological zones. Also not to be bullied when the hypocrites in EU, Italy and Slovenia have their own proclaimed protected fishing and ecological zones on their sides of the Adriatic sea. If the Croatian fishing fleet would ignore it and tried to fish their the boats would be sized and crews charged in court. I am soo dissapointed in EU and how they behaved towards Croatia on this matter.Ä¶ EU enlargement commissioner Olli Rehn said in a statement that refusing to open up the fisheries and ecological zone to all member states would lead to ÄúsanctionsÄù. If Croatia are going to be blackmailed so the EU states can rape and pillage wipe out Croatian resources at will and make a quick profit without any consequences to them selfs. To hell with both Italy, Slovenia and EU. Very sad picture how they behaved towards Croatia. EU is becoming a dictatorship it just needs a dictator and his cronies to take the helm. Is that what Croatia fought fore and sacrificed. My advise to any country thinking of becoming a slave of the EU run fast and separate your self from the EU its not worth it.