Ljubljana has always been Slovenian, despite the fact that an independent Slovenia has only existed since 1991. The struggle for independence lasted more than 1000 years as the people of Ljubljana got passed from one ruling nationality to another, time and again.

The influence of the old Yugoslavia here in Ljubljana is still quite strong, especially when it comes to things such as food and music. Many Serbs, Croats, and Bosnians also stayed here after the break-up of the old country, so the Yugoslav flavour is still present in many parts of the city.

Ljubljana is a city of students, with one tenth of the city's population studying in one of the faculties here. Everywhere you look, you will see students. They are well looked-after by the government and almost everywhere offers a student discount.

Ljubljana is first mentioned in written sources from 1144, its historical rise beginning in the 13th century when it became the Capital of the Province of Carniola. The movement to recognise the Slovenian nation started up in the middle-ages. Primoz Trubar gave the Slovenians their first book in 1550, and later France Preseren and Ivan Cankar - two important figures in the struggle for the cultural and political freedom of the Slovenian nation - produced their works here. 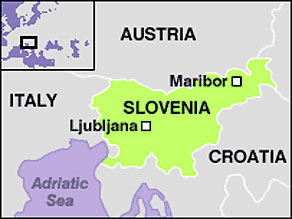 There are two main contradictory beliefs about how the Slovenes came to where they are today in Central Europe. Some say that the Slovenian tribes came from the group of Southern Slavs and arrived in their present homeland sometime in the 6th century. However, the theory that is touted around more and more by the Slovenian people is that they are indigenous to the Alpine region of Europe. Nobody can be really sure of the truth.

What we can be sure of is that Slovenia came under Hapsburg rule in 1335 and later went on to become part of the Austro-Hungarian monarchy. Throughout this 'occupation' there was a movement within the Slovenian ranks demanding that an independent Slovene state be established, but any attempts at action were quickly stopped in their tracks by the authorities. The First World War saw the fall of the Austro-Hungarian empire, and attempts at dividing the monarchy into three parts failed. Most of the Slovene ethnic territory now found itself within the Kingdom of Serbs, Croats and Slovenes (Yugoslavia). In the beginning the Slovene territory was split into two administrative units (the Ljubljana and Maribor oblasti) before eventually being united in the Drava banovina.

World War 2 brought with it the German invasion of Yugoslavia in 1941. Slovenia was once again partitioned. Italy took the south-west part of the state, including Ljubljana. Germany annexed the north, and Hungary took back the region of Prekmurje. The Germans began 'cleansing' the area, deporting first the intellectuals and the priests, and then sending the peasants in the same direction. The resistance was led by the communists, which meant that a kind of civil war broke out on most parts of Slovenian land involving Slovenian anti-communist parties. The situation was extremely ugly, and after the war finished in 1945 the victorious communists killed at least 15,000 political oppositionists in order to stop the danger of counter-revolution. Members of the Italian and German minorities were also forcibly deported.

The republic of Slovenia remained an autonomous state within Yugoslavia until 1991 when she declared herself independent. The idea of brotherhood in Yugoslavia had been dying for many years when the disintegration finally came about. Slovenia had always been the most prosperous of the Yugoslav republics, and many Slovenes resented the fact that they were always subsidising the rest and receiving nothing in return.

The declaration of independence didn't go down too well with the Yugoslav government who attempted to block it through action by the Yugoslav army (YNA). The same evening of Slovenia's declaration the YNA started to occupy the republic's border crossings, the plan being to cut Slovenia off from the outside world and keep them inside Yugoslavia. The Slovene leadership then mobilised the local territorial defense force and the police, who started blocking and attacking the YNA units. The YNA was declared an enemy force by the Slovene authorities, and resistance started up spontaneously all over Slovenia. The ten-day war for Slovenia's independence had started. After two days the Slovene resistance was already showing results. The YNA threatened to use all-out force in retaliation but public opinion in Europe started leaning in Slovenia's favour. By the 2nd of July the YNA had already been defeated in Slovenia. On that day a Slovene delegation arranged with a European delegation in Zagreb to call a ceasefire based on a prior agreement on 1 July in Ljubljana between the Slovene leadership and a delegation of the Yugoslav government headed by its prime minister Ante Markovic. The Republic of Slovenia retained control over its territory, including its external borders, and the Slovene army unblocked the YNA units, released all prisoners of war, and for three months took no further independence measures. All in all it was a very minor war with only thirty-seven YNA soldiers losing their lives in the brief encounter and twelve Slovene Territorial Defense members also becoming casualties.

Slovenia became a member of NATO on the 7th March 2004, a member of the European Union on 1st May 2004, and adopted the Euro as its currency in February 2007. The transition from communist entity to western and European state has been quick, efficient, and relatively painless.

on Twitter). Your journey from Ljubljana sundos more colorful in many ways than ours I mentioned on your Lake Bled post that we went from Ljub to Zagreb by car, so we didn't meet the fascinating locals that you did (always makes a trip more interesting) and we missed being introduced to the colorful and sensual cosmetics you described. As a female, I would have REALLY appreciated that!. During our drive we encountered a nearly universal landscape of gray, concrete block apartment structures dotting the landscape along the highway. I know the color will come over time, but our impression was that the Soviets must not have encouraged diversity/color/beauty (in the architecture of the mass dwellings anyway). It is a beautiful country, and I'm sure that with freedom of government will come freedom to express beauty in art and architecture.If you've not made it yet, I highly recommend a trip along the Dalmatian coast of Croatia to Dubrovnik. It is entirely walled city that juts out into the Adriatic pressed up against mountains. Marble buildings, marble streets, red tiled rooftops, stunningly beautiful buildings it's a must see. The lore is (though I don't know if it's true) that Dubrovnik was considered such a jewel in Europe that both sides in WWII agreed it was off-limits to bombing. Unfortunately those engaged in the Balkan war did not have a similar agreement so it sustained a good deal of shelling (some of which is still visible), but they've gone to considerable effort to repair the damage.I'm going to enjoy your blog, because it feels like re-living many of my own memories, through a different lens! Thanks for sharing your experiences

Good basic info. Of course, if you want more, read a history book (or at least Wikipedia)!

Update the page!! Today is May 16, but your top news is "Airport to be closed in mid-April"...

i think there needs 2b more info on Ljubljana

y dnt they sho the type of goverment