A final pointer we should impart on the prospective tourist is to accept Moscow for what it is. Once you have got to grips with the intimidating…

Above: Brave the rail network and feel like Dr Zhivago Left: Light up those Tupolev engines and go Aeroflot... Below: ...or take the car and face…

Above: McDonalds anyone? Left: For getting around town Below: For getting out of townBy metro 9 million Muscovites can't be wrong - the…

The use of credit cards is not as widespread as in Western Europe, but they are rapidly gaining in popularity. Accepted in hotels, most restaurants…

With grammar that reminds you of those not-so-salad days studying Latin at school, an alphabet that would look strange to Socrates, and pronunciation… 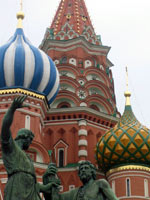 Above: Fairytale architecture in Red Square Below: Holy multi-coloured cow! 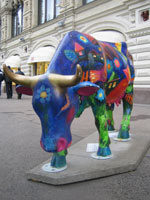 Exploring Moscow as a tourist can be a humbling experience. Everything is just so big. Red Square makes Piazza Navona look like a school playground, you could fit about five of Charles University into the mighty Moscow State University building, and after a trip on the Moscow Metro the London Underground seems like a dainty fairground ride. If you like feeling small, anonymous and insignificant then Moscow is definitely the place for you! Surprisingly, after you've got used to it, it feels quite liberating; and if it's adventure you're after you've come to the right place...

A natural starting point for all but the most maverick sightseer is of course Red Square. This iconic space has witnessed more than its fair share of history and is rich in surrounding attractions. The impressive fortifications of the Kremlin, Russia's seat of power, flanks the whole of one side of the Square, the magnificent GUM shopping centre flanks another, whilst St. Basil's celebrated onion domes are an essential photo opportunity on the South East end and the State Historical Museum stands guard on the North West. Easily enough to occupy anyone for day, Red Square also hosts one of the capital's more bizzare tourist attractions - Lenin's Mausoleum. A must for Commie nostalgia seekers.

If you've exhausted the attractions of 'Krasnaya Ploschad', then just a minute away by foot is another stunning space in the form of Theatre Square. Take in the magnificent Bolshoi Theatre - even better take in a performance! Afterwards head in a South Westerly direction for two more essential sites. The Pushkin Museum of Fine Arts is second only to the Hermitage in terms of grandeur and style in Russia, whilst the reconstructed Church of Christ the Saviour is a majestic place of worship by the Moskva river, with it's scintillating golden-capped roofs. Venture only a little further for the zany Tsereteli Museum.

Next up on the tourist trail is the area of Kitai Gorod (literally 'China Town') - a thirteenth century trading area just East of the Kremlin, which is today characterised by its narrow streets, courtyards, pretty churches and monasteries and laidback caf, bar and club scene. An oasis of calm in a frenetic city!

A little further from the heart of Moscow, and to the West, is a comparable scenic district - the pedestrianised Old Arbat Street. Once the home of legends such as Pushkin and Tolstoy, today the region around the Arbat is probably the most touristy district in the whole of Moscow. Indeed there is a school of thought that says the area has lost much of its character, however the splendid mansions, swathes of bars and restaurants and the peddling street artists make it well worth a visit. The towering Ministry of Foreign Affairs is found overshadowing the Western end of the street, and a great introduction to Stalin's so-called Seven Sisters - seven huge Soviet skyscrapers and the most prominent features of the Moscow skyline.

Well there's the tip of the iceburg for you, but there's plenty more to see and do in Moscow. The Tretyakov Gallery, Gorky Park, the Patriarchs Ponds and the Cosmonaut Museum are all a metro ride away, whilst of course no trip to the capital is complete with sampling the legendary Moscow nightlife... Sleaze and all!

Moscow has several hotels that call themselves "boutique" but not all of them really live up to the standard.

I'm doing a report for a World History project at school, and this helped me choose so many wonderful sites to visit within my project. (: Great job.

Expat Salon Denise: As an expat I have been visiting the fabulous girls at Expat Salon for 2 years now. I can highly recommend this salon from the English speaking staff who are always there to help you,to the very professional hairdressers who always want to do the very best for you and take great pride in their creations. thank you for your wonderful care and attention and all the little extra services you give always with a lovely smile! Expat Salon Jennifer: Been there yesterday, the service is good, really liked the color and waxing. Ladies were very nice and friendly Podium John: I think that u won't able to find better place for relax - only Podium in Moscow! This is the place of true satisfaction with sexy girls. I'd like to invite Podium every day, maybe one day i will even move to Russia for it :)) Soho Rooms Nelson: Here girls ask your cc number before they even say hello ! Pretty pathetic place....