The Seven Sisters are the architectural legacy of one of the most ambitious building programmes ever conceived. Built on the orders of Jozef Stalin, the towers were constructed for the glorification of the Soviet State after WWII, and were intended to rival the USA's skyscrapers that had gone up in the 30s. Each Sister was designed according to Stalin's specifications, in a so-called 'wedding-cake' style, that concentrated the eye towards a central tower. Stalin also insisted that all of the Seven Sisters be given a spire, in order to distinguish them from their American counterparts. 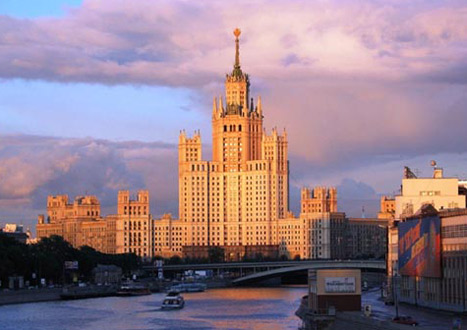 Ironically the structure that served as the blueprint for the Seven Sisters - The Palace of Soviets - was never built. Conceived before the 2nd World War, The Palace was to be the ultimate symbol of Soviet power and crowning glory of Moscow. A vast structure of 415 metres (the last 100m of which was to be a giant statue of Lenin) The Palace of Soviets would have been the tallest building in the world, should it have been completed. Although a site was prepared for the Palace - the sacred Cathedral of Christ the Saviour was destroyed especially - the chosen ground proved to be too soft for the foundations of such a momentous edifice. With the advent of World War II the project was suspended and never resurfaced. Eventually a public swimming pool was built on the site instead, which functioned until 1994, when Mayor Yuri Luzhkov had the Cathedral of Christ the Saviour rebuilt.

If Stalin lost interest in the Palace of Soviets, then he wasted no amount of energy or money on the construction of the Seven Sisters, or 'Vysotniye Zdaniye' as they were more officially known (literally meaning 'The High Buildings'). Situated in key areas around Moscow, these towering skyscrapers are still the dominant feature of the city skyline. The jury is still out as to whether they are beauties or beasts, but what can't be denied is their impressiveness. When you are standing underneath one such tower, engulfed in her gigantic shadow, it is very easy to see how these vast buildings were effective as powerful tools for state propaganda, and for fostering a belief of national superiority.

The Seven Sisters are as follows:

There are two other buildings that are sometimes considered the 'Eighth Sister', due to their similarity in scale and design to the other seven. The first is the Palace of Culture and Science in Warsaw, part of Stalin's attempt to 'Communise' Poland (see also Nowa Huta, in Krakow); and the second is the recently-completed Triumph Palace in Moscow. At 264 metres, it is tallest building in Europe (59th in the world), and contains a thousand luxury residential apartments.

Finally a similar monster exists in Riga, Latvia. Perhaps not quite big enough to be in contention for the coveted title of eigth sister, it undoubtedly comes from the same gene pool. If you're in the Latvian capital, check out the Academy of Science to see what we mean!

Incredible buildings - all of them. They are Orwellian, and there's a cruelness about the way they bully the skyline, but at least they have enormous character - something missing from a lot of modern architecture. I think in time all Muscovites will come to love them.

There is another monster, a copy of the Russian palace in Bucharest, in the Piata Presei Libere. In the past served as the house of the communist newspaper "scanteia" and othe publications and today there are many businesses hold in..including some TV Studios.

Having been to Mosocw on business (and to the Champions League final in 2008) numerous times over the last 3 years, I have come to love the city. I have always had a fascination for the 7 Sisters, and think they are superb architecturally. I sit here writing this from my hotel in Warsaw overlooking the eighth!

i have been visiting moscow since 2000. but only this year i have got to know about Seven sisters. i saw some of them and they made a great impression on me. and now i tell all my freinds about these fascinating,exciting stalin's towers and show pictures. i think that next summer i will see all of them.

I was living more than 2 years in one of the Seven Sisters (in the Kudrinskaya one) with a beautiful panoramic over the White House and the American Embassy and with the very nice Real Mackoy Pub in the underground floor. I w´ll never forget that exciting time of my life.

Went to family wedding in Moscow in July 2008. Stunned by the skyline dominated by the seven sisters. Stunned by Moscow itself and the people we met, can't wait to go again, must be the best city in the world.

I had the privilege of working in Moscow for some months in 1995. Our offices were located within the grounds of the ministry of Foreign Affairs, one of the Seven Sisters with the pedestrianised Arabat being just round the corner. It was an exciting time then when Russia appeared to be opening up to the world under the gaze of Stalin. Not certain how the city has evolved since.

An excellent insight! I am delighted that the Cathedral of Christ the Saviour has been rebuilt. I am not a Christian, though. Human heritage it is as much as the Seven Sisters, other monuments.

Back in 1997, I had the opportunity to stay at the Ukrainia Hotel, one of the six sister buildings. Although services back then were starting out in Moscow, the ambiance and history of the building kept me in awe through out my 3 days stay.