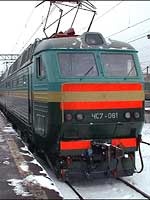 Above: Brave the rail network and feel like Dr Zhivago Left: Light up those Tupolev engines and go Aeroflot... Below: ...or take the car and face document checks with the friendly local traffic cops 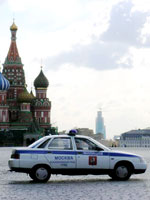 Sheremetyevo is the main airport for Moscow and is the one you're most likely to arrive at. Don't hold your breath: built for the 1980 Olympic Games, Sheremetyevo is now groaning under the weight of a post-Soviet travel boom which has pushed annual passenger traffic above 12 million people a year. The building is rather shabby and queues are common. Expect to take at leat 45 minutes to clear security, check-in, and passport control. There are two main terminals, 1 and 2, so make sure you find out which you are flying from when leaving Russia. International flights mostly depart from Terminal 2 and Domestic flights from Terminal 1, but there are some exceptions.

To get into central Moscow the easiest thing is to grab a taxi. Drivers vying for your attention ask for outrageous sums, up to 100 USD (2500 roubles) for a 45 minute ride. Just say no, offer around 1000 - 1250 roubles and you'll get your cab!

Vnukovo is home to the huge Russian Government Fleet. It's unlikely you'll find yourself here unless you've done something wrong!

Domodedovo is situated about 50 miles south of Moscow, and is connected by a train service which takes about 45 minutes to reach the city centre. 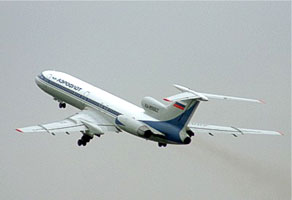 It usually takes about 36 hours to get from Western Europe to Moscow or St. Petersburg by train. If you take a train from Eastern Europe (Warsaw, Poland, for example) it'll take you around 24 hours, whilst travelling from the Baltic states will take you around 15 hours. Add some time for changing trains. The average return ticket from Western Europe to Moscow by train is around $200. Obviously, the closer you are to Russia the cheaper it is, especially from the Baltic States. If you have an international rail pass the price might be considerably cheaper, depending on the option you choose.

Not for the faint-hearted! Do you really want to drive for 36 hours only to be greeted by the madness of Moscow rush-hour? Think again!

I would like to take a Refresher course in Russia.

I need To See Moscow

Very interesting and helpful, keep up the good work :)

hmmmmmm this info is real great helpful because am planning on to going down there so i give this a 10 out of 10 i love this information you all put up ;]

Just thought I'd mention that if you have the chance and if you are a bit nervous of flying I recommend trying to get to Russia by any carrier OTHER THAN AEROFLOT. They still fly the old Tupolev 154 a bit too often for my liking, and when I can from Warsaw recently that's what I got on! I have to say the flight was fine, but I didn't much like the smell of hydraulic oil in the cabin! Often if you book a ticket with another airline (Like Polish LOT) you think you will be flying on their nice new Boeing or whatever, but when you get to the airport, you find you are codesharing on one of these rustbuckets. You have been warned - always check first!!!!