The 1980 Moscow Olympics are perhaps most famous for the US-led boycott that saw only 80 out of 147 nations compete, the lowest number since the 1956 Melbourne Games. The boycott was made in protest of the Soviet invasion of Afghanistan the year before, one of the many conflicts that took place as the Americans and Russians battled by proxy during the Cold War years. Allies such as Britain and France also condemned the invasion but allowed their athletes to compete nonetheless. 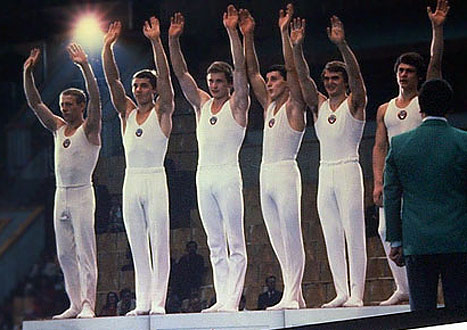 The games turned out to be a tremendous showcase for the Soviet athletes who, with the help of their home soil and partisan crowd, raked in a staggering 195 medals, 80 of which glittered gold. East Germany came second overall, hauling in 126, and Bulgaria were a distant third with 41. Thirty-six World Records and seventy-nine Olympic Records were set during the competition.

Highlights of the Games included the virtuoso gymnastic displays of Alexsandr Dityatin, (USSR) who won eight medals, including gold in the team events, the individual event and the rings event. He also won silver medals in the vault, parallel bars, fixed bar and pommel horse, and the bronze medal in the floor exercises.

Another Soviet star was Vladimir Salnikov, who won three gold medals, in the 400m freestyle, 4200m relay and 1,500m. Eight years later, he made an extraordinary comeback by winning the 1,500m again!

Cuban super-heavyweight, Teofilo Stevenson, became the first boxer to win the same division three times, and Britains Steve Ovett and Sebastian Coe went head-to-head in the 800m and 1500m in one of the best track and field rivalries of all time. Ovett won the gold in the 800m and Lord Sebastian Coe (Chairman of London's successful 2012 Olympic bid) stormed to victory in the 1500m.

Worthy of note is that Merlene Ottey, the great Jamaican and latterly Slovenian sprinter (Ottey now lives in Ljubljana), won the first medal of her Olympic career at the Moscow 1980 Games - a bronze in the 200m. Amazingly Ottey competed in both the 100m and 200m in Athens 2004, at the ripe old age of 44, reaching the semi-finals in each.

Nice, thanks for the info of my country!

Only 80 countries participated not 81 because New Zealand wasn't official participating.

I still remember watching in awe the perfect choreography from the public, forming figures like a giant tv screen. I was 10 then.

Lucas, are you a friend of mine. My real name is not Prongs, but Leonardo.

The Olympics were very good, but this article did not state much about it.

best trip of my life spent 3 days kiev 3 days leningrad 7 days moscow beautiful people -country .closing ceremonys still the best i have seen.the safest place i was ever in .left bag on subway when i got off 10 seconds later it stops and 4 pepole came running after me and gave me my bag back nothing missing(passport-money etc)

what i dont get is; the boycott was formed because of the war in Afghanistan, but Afghanistan still attended. what happened there?

The US-led boycott did contribute to the breaking,politically,of the Soviet bloc,for better of worse.There were actually 81 participating countries,including New Zealand reduced to 1 modern petathlete and 3 canoeists,and also Mozambique,which was not registered on time and thus not formally invited but was included anyway. 29 of the 208 gold medals contested went to Western European athletes who got the Olympic flag instead of their respective national flags in the medal ceremonies.One medal ceremony,a men's cycling event,was the only one to have all three medallists' flags being Olympic flags.

The U.S. had put together a particularly strong team for 1980, but of course the team wasn't allowed to compete. This was a shame. The Soviets stayed in Afghanistan until 1989, and our athletes were the ones who were punished for Brezhnev's invasion. Those of us who were hoping to watch the Games on television were out of luck as well. American admirers of Russian culture were punished along with American athletes.