The Kremlin, seat of the Russian government and home to some of the world's most infamous leaders, ranks alongside Red Square and the Hermitage as one of Russia's top tourist attractions. Ivan the Great, Ivan the Terrible, Lenin, Stalin, Gorbachev and Yeltsin all held sway here, and from within these fortified walls they cast their indelible marks on the pages of history.

'Kremlin' is actually the term given for the fortified stronghold of any city, and many other kremlins exist in large towns throughout Russia and acted as seats of power for local rulers. Moscow's Kremlin began life in the 1150s, on a much smaller scale than it exists now, and was added too by various rulers as Moscow grew in wealth and power. Ivan the Great was responsible for the most ambitious modifications, and during the period of 1475-1516 Italian architects were brought in to build new fortified walls and a number of cathedrals - including the Cathedral of the Assumption, outside which Ivan famously tore up the charter binding Moscow's princes to pay tribute to the Mongols. 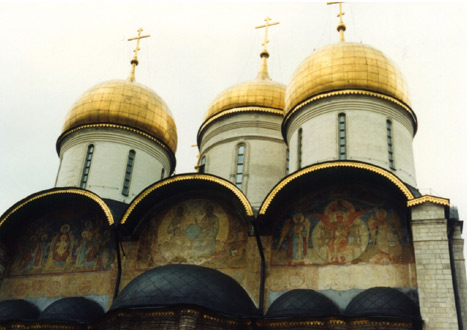 Since then many more of Russia's leaders have since left their mark on the Kremlin and today's visitor can't fail to be impressed by the vast montage of spectacular buildings that awaits them. Constructed from the 15th Century right up to the 20th, you will find a number of bold and grandiose architectural styles in these edifices, which combine to reflect the glory and splendour of Russia through the ages. Unfortunately the government buildings and palaces can only be seen from the outside, but several hours can still be spent touring the site, admiring the various cathedral interiors and soaking up a profound sense of history.

Below is a brief introduction to the most-celebrated buildings of the Kremlin complex:

Trinity Gate Tower - built in 1495, the Trinity is the tallest of the tower fortifications, stretching up 80m skyward. It was under this gate that Napoleon's troops both entered and fled from the Kremlin. Its basements were used as a prison in the 16th Century.

Saviour Gate Tower - today the Kremlin's official exit onto Red Square, the Saviour Gate Tower was also the favoured gate of the Tsars, who would lead ceremonial processions underneath its gothic spire. The 25-tonne clock chimes every 15 minutes.

Arsenal - home of the Kremlin Guard, the Arsenal was constructed on Peter the Great's orders as a massive weapons depot. Around its exterior are 800 French cannons, captured by the Russians during Napoleon's disastrous retreat from Moscow. No entry, malheuresement.

The Senate - a splendid example of neo-classical design, the Senate's mustard yellow walls were masterminded by the renowned architect Matvey Kazakov, on the instructions of Catherine the Great. Famous as the location of Lenin's office after the October Revolution, today the Senate serves as the official Presidential residence. No, you can't go in.

The Presidium - lurking in the north-eastern corner of the Kremlin complex is the Neoclassical edifice of the Presidium. Built in 1934 as a school for "Red Commanders", it was subsequently made home to the Presidium of the Supreme Soviet and today houses various government offices.

Poteshny Palace - commissioned by Tsar Alexey Mikhailovich, the Poteshny housed the first Russian theatre and later provided a place for Stalin to rest his head after a hard day of signing death warrants. View from the outside only.

The State Kremlin Palace - this modern glass and concrete structure was completed in 1961 during Khruschev's rule, when Soviet power was at its premium. Originally called the Palace of Congresses, a 6,000 seater auditorium was built to host Communist Party conferences. It was renamed in 1992 and now hosts performances by the Kremlin Ballet company.

Patriarch's Palace - originally built as a residence for Patriarch Nikon, the Palace is remarkable for housing the five-domed Church of the Twelve Apostles, the impressive Hall of the Cross, and the over-elaborately titled 'Museum of 17th Century Russian Applied Art and Life.'

Assumption Cathedral - the oldest and most famous of the many Cathedrals that adorn the Kremlin, the Assumption is the work of the celebrated Bolognese architect Aristotile Fioravanti, and its golden onion domes are the subject of many a picture postcard. Accounts vary, but some say that Ivan the Great was so pleased with the Italian's work that when Fioravanti requested to return home he was thrown in prison instead, to prevent him from creating such masterpieces anywhere else.

Church of the Deposition of the Robe - a modest structure, built by Russians in the Russian style, this church was the private chapel of the religious big-wigs. Today it houses a fascinating collection of wooden figures and carvings.

Ivan The Great Bell Tower - its gleaming gilt dome dominates the Kremlin skyline, and for centuries the Ivan the Great Bell Tower was the tallest structure in all of Russia. Constructed of bright white stone and soaring to a height of over eighty meters, the bell tower was completed in 1600, during the reign of Boris Godunov. In the adjacent belfry hangs the massive 64-tonne 'Resurrection Bell'.

Tsar Cannon and Bell - two cases in point refuting the old adage 'bigger is better', the Tsar Cannon and Bell are as impressive as they are useless. The 40-tonne cannon, designed to add meat to the Kremlin's defensive fire-power, never fired shot, and the 202-tonne bell never rang on account of an 11-tonne chunk falling off during the cooling period of its construction.

Archangel Cathedral - The most Italian of the Kremlin's churches and the last of Ivan the Great's contributions to Cathedral Square, Archangel Cathedral was the official church for all coronations, royal weddings and burials until 1690, when Peter the Great moved the capital to St Petersburg. With the exception of Boris Godunov (buried at the Trinity Monastery of St. Sergei), the Cathedral houses the remains of everyone from Grand Prince Ivan Kalita (1325-41) to Tsar Ivan V (1682-96).

The Grand Kremlin Palace - constructed by Konstantin Thon in the Byzantine-Russian style, the Grand Kremlin Palace was built as an Imperial residence for Nicholas I and contains a cool seven hundred rooms. It also incorporates several other of the Kremlin's important buildings, including the Terem Palace, Hall of Facets, and Armoury. Unfortunately you can only go inside the latter.

The Terem Palace - the original residency of the Emperors until Peter the Great shifted the capital north, the Terem is a marvelous building that has enjoyed several facelifts since work began on it in 1499. Admire the chequered roof and eleven golden domes of the exterior peeking up behind the Church of the Deposition of the Robe (this is as close as you get!).

Hall of Facets - so-called because of its delicately diamond-patterned stone faade, the Hall of Facets has hosted some wild parties in the past, including the celebration of Ivan the Terrible's capture of Kazan in 1552. Today it is restricted to Government officials and visiting dignitaries only.

The Armoury - built in 1511 as a weapons and arms store, the Armoury has spent most of it's life as an unofficial museum of royal treasures. Today it plays that role de facto and tourists are invited to ogle at its impressive collection of gold and silverware, thrones, carriages and Faberge eggs. Tickets are sold separately, on top of the general entrance fee into the Kremlin.

Ladies and Gentlemen, This is my 3rd attempt to get an authaugraphed picture of president Putin. Maybe you can help me. Please mail it to Peter Turulski Fleher Strasse 107 40223 Düsseldorf Germany Thank you. Best regards Peter Turulski

I am from New Zealand and lived in Russia for 5 years during Soviet Times. I am sure that the '" Kremlin" is the recognized building throughout the world. Putin has made it even more so.

Wish it had building materials listed

You haven't mentioned that the Hall of Facets wasn't just the place for some wild parties, it was the original medieval great hall of the Kremlin.

I haven' t heard too much about this. It's very interesting. Can't wait till my people-to-people field trip!

Interesting article. The very name used to strike fear into the 'West' but with time this is passing. I visited the Red Square some years ago, and it is quite awe-inspiring, especially with the soldiers changing guard at the Tomb of the Unknown Soldier

EPIK :D I come from a long line of russian history :D

This article overall does have a lot of great information, but it could use just a little bit more detail as well as some pictures of the inside and outside of all its areas. Thanks :) Victoria

so interesting to know about kremlin,one of the power house of the cold war. i wish kremlin can join the west in the effective realization of u.n security council on iran to bread a world without nuclear confrontation

This was very helpful and bettr get me a gud mark, jks :P

Visiting the Kremlin was one of the highlights of our trip to Moscow. You could really feel a sense of history. I'm sure that most tourists will have the Kremlin on their itinerary - and if so they won't be disappointed. i love russia.

I sure looks like a nice place to me. Probably beats the exploitation, inequality and oppression taking place in America right now.

you honestly need to give the viewers more info like when & where the building was constructed. does the building have a special type of name? thanks heidi

To everyone whining for more information, I have just one word: "L-I-B-R-A-R-Y!"

This site is okay, but I'm doing a report on the kremlin and I need some more information. it would be great if you could show some more pictures from different angles and include some more information on its importance. Other than that , it is a pretty good source of information. Thank You for making this a decent site for students to base their reports on.:)

I too am doing research on the Kremlin, I think this is a good site, it tells the year when it was started, when it was modified and for whom, who modified it, and all of it's components. I overall thought that this site was helpful for me!

I am, I confess, saddened by the pathetic comments by school children. Literacy in Russia is estimated at 97%; what might it be in the USA? 3%? No? Too much? I was hoping for more images of the Kremlin and the Red Square.

Visiting the Kremlin was one of the highlights of our trip to Moscow. You could really feel a sense of history. I'm sure that most tourists will have the Kremlin on their itinerary - and if so they won't be disappointed.