As you might expect in a city of over 12,000,000 people Moscow has an amazing array of nightlife options and a scene for everyone - be you a jazz aficionado, a hardcore clubber, or just a plain old alcoholic. In fact it's difficult to generalise about the nightlife scene here, precisely because of its diversity, but there are things we can mention that are typical Moscow traits...

One thing that newcomers to the city will quickly notice is that a bar or nightclub is rarely just that. Every drinking venue in Moscow doubles up a restaurant and a very high proportion triple up (if one can do such a thing) as a bowling alley, billiards club, casino, concert venue or even book shop! Perhaps it's because Moscow is such a vast metropolis, and taxis are so expensive, that bar and club owners want to provide their customers with a 'one-stop-shop' for nightlife entertainment - rather than send them out into the, often bitter, cold night for a bite to eat! 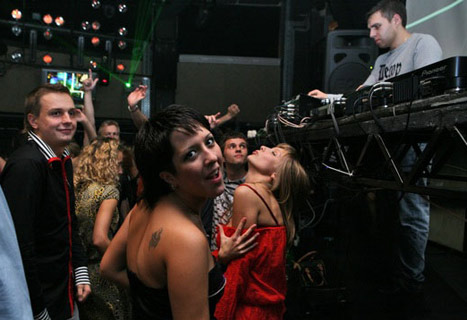 So in other words Moscow isn't the best city in the world for bar-crawling, especially bearing in mind that these multi-purpose venues often charge a cover, but rather it's best to choose your spot for the night and stick with it. Naturally then there's a little extra pressure to make the right choice... And that's where we come in! Read on for our top nightlife recommendations.

Well first up in Propaganda, a stalwart of the Moscow nightlife scene if ever there was one! A good-looking yet friendly crowd of local students and foreign tourists reliably pack out this bar-cum-club, and a night of drinks and dancing here rarely disappoints. If however you want a more full on club experience, then Fabrique is the place to head. No relation to Fabric in London, Fabrique is more glamorous, although perhaps slightly less fun that Propaganda, with a decent programme of foreign DJs. Then of course there's Mio, where the cool kids like to cut loose!

If you're more wired towards alternative nights out and live music, than 130 BPM, then fear not. Mother Moscow does not neglect any of her nightlife children... B2 is a veritable palace of fun, with a floor dedicated to cutting edge live acts of every variety, whilst the cult favourite - The Chinese Pilot - is not to be missed by anyone who likes to take a walk on the wild side.

The scope for listening to live jazz in Moscow isn't narrow either. Choose between homely authentic jazz dens like Forte, or go upmarket and check out super-suave joints such as Le Club. Real jazz lovers won't be disappointed with either.

Of course Moscow being the city of sin that it is, there are some great places to hang out, flash your cash and see how far you get with the rather sultry members of the opposite sex around here. A word of warning - if it seems to be too good to be true, then there's probably a price tag attached. And it's unlikely to be a small one. Bars like Piramida and Nightflight occupy prime spaces near Red Square and are notorious meeting places for rich businessmen and very naughty girls! Of course you could remove the ambiguity and head straight for Dolls, one of the classiest strip joints in the city. And if you're really feeling like a high-roller, break out the Bentley (or better still the Bugatti Veyron) and head for Premier Lounge or Soho Rooms.

Finally no guide to Moscow's nightlife is complete without paying lip service at least to its most notorious venue. The Hungry Duck has seen some very raucous action in it's time, and although it might not be quite the no-holds-barred haven of hedonism it once was, there's still plenty of life in the old bird yet.

Right, if you still haven't found what you're looking for we can only suggest that you have a thorough root around in our pubs and clubs directory. As well as our humble takes on the venues in question you'll find the opportunity to read public opinions and place your own reviews - who said that Russia isn't a democratic country?

Hello guys it’s Kareem again if you are traveling to moscow anytime soon and want any help or someone to show around in moscow don’t hesitate to contact me . +79629809166

Don’t allow that closed night clubs list to make you feel sad or depressed. You can still enjoy Moscow nightlife! Here is another list that has all the right places.

Hello guys , Will b in moscow and saint petersburg as on 25 Aug - 30 Aug 2017 . Any beautiful guide available who can b with us for hanging out , night clubs etc etc

Hey ..i m visiting moscow and saint petersburg from 25 th Aug to 30 aug. Really want to have a lovely company who can hang out for parties malls etc

I'll be in Moscow this coming weekend 22/23 July. I would like to visit the city and find good Restaurants. Feel free to contact me

Where are the best bars and clubs in moscow, places we can have some fun on 28 and 29 july

Hi friends, I will be in Moscow from 21/25th July and from 25/29th July in St. Petersburg. I need to go to good Bars and Night clubs. Thanks

i will be traveling to moscow next year.are you available to be my tour guide?.and how much. thank you

Hi Karim Not able to reach you on this number. Are you in Russia?

Hi my name is bek if you need guide for moscow i am here plz write me ...

We plan with the guys (five of us), in early July to fly to Moscow on 8 days. All day we have something to activities in the evening to do nothing.Tell me, where can have fun in the evening in Moscow. I'd like to see Moscow at night.

"Moscow has an amazing array of nightlife options" Really? If you love pop/techno/R&B then you're set up beautifully. Anything else even vaguely alternative and non-mainstream and you're looking at 'maybe' 1 good bar or club. I'd say that Moscow is one of the WORST cities I have ever lived in for alternative music. Alternative music doesn't bring in the cash and most of the good ones have closed down, leaving only generic stuff.

Would be interested in your services if you are for real !! We ll be there between 4th to 8th September 2015. Thanks and regards, Rohit.

we are visiting in April'16 may need your services

Hi Nice Moscow Girl I will be in Moscow for the world cup. Are you still available to help us out? Please do reply at the earliest

Please i want to get the name and address,of a club in Moscow,where i can find English speaking working class Russians,to chill with during the weekends,especially on saturdays,thank you.

Does anyone have some tips for a epic club were we can enter with a large group (30 guys) ?

Special for Daniel-James - i able to help you

Please email me , we are looking to find someone in russia who can help us arrange a night in the Uk.FUll details can be sent once an email adress is recieved

It is just a bar though, so not huge, no coat/bag check, and the dance floor is pretty much all available floor space between the tables that are pushed up against the walls. Some people were even dancing on the bench seats. Bathrooms were clean though, drinks were good, and the atmosphere was hot and sexy, just like a club should be.

Of course I prefer clubs like I find in the US and Moscow is sorely lacking, at least from what I was able to research on the internet. Propaganda plays horrible techno music (I'm not against techno, even fans say it's bad) that is really difficult to dance to, and most other bars or clubs have some sort of obscure theme, like 50's music or metal, which are, again, not my usual clubbing style. I did find a club by accident (never showed up in any of my web searches). It's called Куба Либре Бар: http://barcubalibre.ru/ The one we went to is right next to Chistye Prudy. The music is an interesting mix of American Top 40, American old favorites like Billy Jean by MJ, and Russian and European Pop (don't know if it's current or old favorites). I wont say I knew or liked all of the songs, but this was the closest thing to my idea of a real nightclub that Ive come across in this city. It is just a bar though, so not huge, no coat/bag check, and the dance floor is pretty much all available floor space between the tables that are pushed up against the walls. Some people were even dancing on the bench seats. Bathrooms were clean though, drinks were good, and the atmosphere was hot and sexy, just like a club should be.

Hi, where is a safe place for an asian to have fun? I mean clubs like fabricue do they discriminate asians?

I've forgotten Lookin room - there are two: bar and club, the bar is better! Gipsy and Rolling stone

Hi...I am a tour director..I would like to know if there is any place in Moscow that people can find nite club with beautiful ladies? You know what I mean. Thanks

this is a very old article, old information. this clubs are shit. The best clubs are- soho rooms imperia lounge pacha rai

what is the best club in moscow?

I was in jazz-club "Souyuz Kompozitorov" (Union of Composers) [ www.ucclub.ru ] in the very center of Moscow - it was amazing! Romantic atmosphere, candles, music that let you fly...Jazz, blues. Recommend!!!

You know, a DATE on this review would be a good idea. Hungry duck is so pathetic and so dangerous, expect to be robbed. Some of these clubs are closed, or the crowds have moved on.

Thanks a Ton. Great writeup and view points. I am sure to try out few of your destination, specially Hungry Duck.

What about the really good places, the ones Moscow are all about? The flash ones with loads of birds. I recommend Club Opera.

thx olot... been to some of these night clubs. but i can say from different to others that club 13 is the best..good atmosphere for good djs..and why people dont speak about djs here...who is playing at where...or which dj is coming..?? anyhow carl cox is coming soon on 13th...be there mates... have fun

the Moscow nightlife is raucous indeed! Never seen so many hot girls. Spent about a million rubles but i'd do it all again in an instant. Fabrique, Night flight and hungry duck were the best

Thanks guys. A great introduction to the Moscow Nightlife. I look forward to getting over to Russia and trying some of your suggestions. I heard that Moscow bars and clubs rule! And that the women are out of this world...........!!!!!!!!!