Most Berliners speak English to some degree, with the youngsters in particular tending to be somewhere between very good and fluent. Nonetheless it…

Above: Like the circle line, except far more reliable Below: The typically Teutonic Tempelhof terminalBy air Currently Berlin has two…

Above: South of the river? At this time of night? Below: Put your foot to the floor! By public transport Getting around Berlin by public…

In this respect, Berlin is still not 100% ready for foreign tourists, with many shops still not accepting credit cards. International stores and big…

Although it is easy to get around Berlin without learning any German, as most official offices speak English and most Germans will want to practice…

Built on sand on around the banks of the river Spree, Berlin has been one of Europe's most influential economic, cultural and political centres - for… 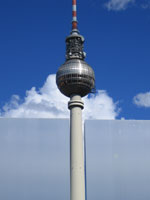 Above: The Fernsehturm Below: Festive goings-on on Museuminsel 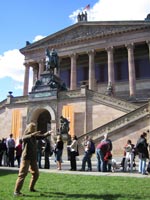 If you're coming to Berlin for just a weekend you can think again about seeing all of her many attractions - you'd be surprised just how much she has to offer! What was once two separate cities, east and west, is now one giant cityscape, comprising of many districts. Each has their own unique atmosphere and history, and more than their fair share of things to do and see.

The old Eastern district of Mitte had become the city's increasingly affluent centre. A charming mix of 21st century modernisation and 20th century dilapidation, Mitte is renowned for its hip shopping and even hipper nightlife. This diverse landscape is also home to essential attractions like Alexanderplatz, with its sky-scraping Radio Tower; Museuminsel, an incredible concentration of world class museums perched upon a single island; and the wide expanse of Unter Den Linden, leading to, symbol-of-the-city, Brandenburg Gate. Mitte makes a natural starting point for anyone exploring Berlin!

Remain in the old east a while longer and you'll discover two more fascinating districts in Prenzlauer Berg and Friedrichshain. The former has undergone a rapid transformation in the last few years from edgy artistic zone to up-and-coming residential district. Head to Kollwitzplatz to soak up the coffee and conversation vibe. Meanwhile Friedrichshain - blighted by Communist architecture - has picked up the mantle of Mitte and Prenzlauer Berg when it comes to raw and funky happenings. Check out Berghain nightclub to see the city's darker edge.

There will be many, particularly the more gentrified amongst you, who will prefer exploring the west of the city. Many of Berlin's most luxurious hotels are found in Charlottenburg, the principal district in what was once the Allied half of the city, and the area still remains the commercial and business hub of the capital. From here you will be perfectly placed to explore Berlin's shopping malls, such as the monstrous KaDaWe, or stroll down the famous Kurfurstendamm, Berlin's very own Oxford Street. And, of course, no trip to Charlottenburg would be complete without visiting the resplendent Schloss Charlottenburg Palace.

Also in the old west is the leafy district of Tiergarten, which divides Mitte and Charlottenburg. Dominated by a large park of the same name, Tiergarten is also worth exploring for top attractions like Berlin Zoo, Potsdamerplatz and the Reichstag, Berlin's splendid parliament building.

Got tired feet yet? Time to order that motorised wheelchair. Schoneburg was the home of Marlene Dietrich, David Bowie and Iggy Popp and witnessed JF Kennedy's famous 'Ich bin ein Berliner' speech and worth perusing for a sense of history alone, whilst Kreuzberg makes for a very pleasant stroll if you like exploring art galleries and quirky cafes. Also in Kreuzberg you can see the best preserved section of the remainder of the Berlin Wall.

Of course it it all gets too much for you, then strike out West for some stunning forests, beaches and lakes!

hey how are yall what is the publisher of this site

ready to be in Berlin but better to apply for the university entrance permission at first since my twins are studying in high school with touring classmates from Germany. I'd be appreciated if you could do me a favor telling me how.

Hi! I'm going to Berlin in august with my girlfriend. So I'd like to know about live music, good food and nice Ppeople. Thanks for helping me out!

The Rumour is that DICE is opening soon! Is this a Club that is on a level like berghain? We will see... www.dice-club.de

Hallo da drau?en! I gonna go to Berlin this year and look forward to it. But for all the others out there: Shouldn't go there on May 1st! It's known as the day of tumults and brutal (sometimes bloody) protests. Better go to Berlin in the summer. Then you can also enjoy its famous beaches and parks. Tsch??????? und auf Wiedersehen.