Officially continental Europe's largest department store, the KaDeWe or Kaufhaus des Westens will, in 2007 celebrate 100 years of business and is one of the finest monuments and representations of the last century of German history. Through two world wars, the period behind the iron curtain and the fall of the Berlin Wall, the KaDeWe, like an elderly relative (though an altogether more interesting one) has seen it all.

Opened at the beginning of 1907 by businessman Adolf Jandorf, the KaDeWe initially comprised of 24,000m2 set over five floors but quickly rose to fame as Berlin's premier shopping spot.

In 1927 the KaDeWe was acquired by the Herman Tietz and became part of the Hertie group. First on the agenda was the modernisation and expansion of the store with two further floors being added in 1931. Tietz's expansions and good intentions were undone with the arrival to power of the Third Reich. Being of jewish origin, the Hertie group suffered from the new stipulations of the Nuremberg race laws and Aryanisation prohibiting the ownership of business by Jews, thus forcing the change of ownership of the store. Once aryanised, the KaDeWe, like much of Berlin was targeted between 1943-45 with allied air raids destroying much of the store, putting it out of action while the country struggled to regain stability in the immediate post-war period and it is in this sense that the KaDeVe's destruction and subsequent period of activity symbolises the period of transitional suffering experienced by Berlin. After the loss of KaDeWe, Tietz and his family fled the country while Adolf Jandorf's grave can be seen today in the Jewish cemetery of Weissensee, in Eastern Berlin. 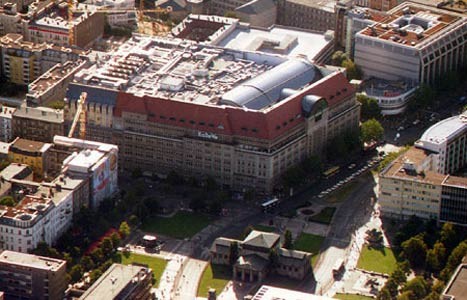 Between the end of the war in 1945 and 1950, the KaDeWe lay inactive while the city struggled to come to terms with its post-war existence. On July 3rd 1950, the KaDeWe celebrated its re-opening with 180,000 visitors. This re-opening was seen as an important symbol of economic recovery epitomised by the Wirtschaftswunder. A combination of the Marshall Plan-inspired reparation payments, hard work, long hours and full employment capacity led to the continued economic growth and upturn in fortunes experienced by both East and West Germany in the immediate post-war period.

In 1956, the KaDeWe was entirely rebuilt with the inclusion of a foodhall on the 6th floor, thus marking a new beginning of the store in the post-war period, just five years before the erection of the Berlin Wall.

In 1996, within the framework of united Germany and the thriving city of Berlin, the KaDeWe was once again, completely renovated and re-opened boasting over 60,000m2 of shopping space, officially making it continental Europe's largest department store. This latest renovation included the upgrading of the food hall with an additional floor being added purely dedicated to providing visitors with gastro-satisfaction. Today, both the 6th and 7th floors are dedicated to food, with the penultimate floor acting as a delicatessen while the final floor has been converted into a winter garden restaurant where one can enjoy excellent food surrounded by all-windowed walls providing stunning views of Wittenbergerplatz. Much is made of the fact that two football pitches worth of space are dedicated to food and foreign visitors and Berliners alike struggle to find better than the KaDeVe's delicatessen for their ethnic and luxury food needs.

However, like much in Berlin, despite the city's thriving spirit and forward-looking mentality, there are constant reminders of the past, none more poignant than the sign standing outside the KaDeWe centre with the following extract "Places of terror that we are never allowed to forget" before listing the names of the most significant death camps operated by the Nazis during the second World War; a reminder if reminder be needed of the disturbed past of the city and country and the dedication of Berliners to the lessons of the past and the constant education of future generations.

could just walk around here for hours... great stories and a great building. GOOD.

Never let that reminder of the past be taken down. No Berliner should ever forget or lose the opportunity to learn of the history of this building.

David Clarke, have you contacted a Jewish museum about the letter?