The Berlin International Film Festival - also known as The Berlinale - has become one of the film industry's most prestigious annual events. Established by the Americans who occupied part of Berlin after the Second World War, it was started in 1951 as an attempt to bring back some of the culture and romance that had been synonymous with the city during the Golden Twenties. Alfred Hitcock's 'Rebecca' opened the very first festival, with its star Joan Fontaine present as the event's most feted face. 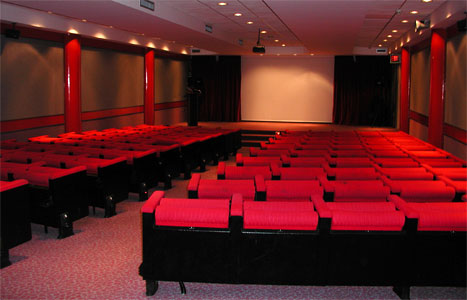 Today, The Berlinale has grown to become Berlin's largest cultural event, bringing an unparalleled buzz to town for two weeks in February. A record 150,000 tickets were sold this year - the biggest audience of any film festival in the world! With 16,000 film professional also rocking up and around 350 movies screeened, the festival has also become one of the most significant forum and discussion boards for the industry, ranking alongside Cannes and Venice in terms of prestige.

Although the Berlinale is best known for its promotion of world cinema and fresh talent, a number of Hollywood classics and big-name directors have won over the juries and claimed the coveted 'Golden Bear' award. (Nb. the bear is the symbol of Berlin!).


The films are screened in a host of superb cinemas across the city, including the Arsenal, CinemaxX and CineStar.

For more information on the festival, with programme and the latest news, check out the Berlinale official website.

Nice festival. Woh, if I can join there! Maya www.netgator.blogspot.com

Hey i m from pakistan i want to join this festival .......how i can join this. plz guide me

it was ok and a great festival i really enjoy it.

It is a great festival and a brilliant place to see new and emerging film makers.

here you have all information: http://en.wikipedia.org/wiki/Berlin_Film_Festival it was the movie GRBAVICA, by Jasmila bani? form Bosnia and Herzegovina (movie was made with Austria, Germany, Croatia)

Big up the Berlinale! The Berlin Film Festival is just such a fun event and the city of Berlin is so amazing that i just never want to miss this event

Does anyone know who won the Golden Bear at the Berlinale 2006? Cheers