Built on sand on around the banks of the river Spree, Berlin has been one of Europe's most influential economic, cultural and political centres - for better or worse - since it's origins as a trading post in the 13th century. It was capital of both the Prussian and the German Empire until World War I uprooted the Hohenzollern dynasty, which had ruled since the 15th Century. After the War the Weimer Republic was established and Berlin enjoyed a period of unprecedented prosperity and creativity - known as the 'Golden Twenties'. In the 30s however the German economy was collapsing and a accumulation of socio-political reasons saw Hitler and the Nazi party seize power.

Berlin became the centre of one of the most infamous regimes in history, and remained so until 1945 when it was liberated by the Red Army. Unfortunately liberation was a painful process. The Russians, who has lost close to 30 million people in the conflict, exacted a heavy revenge on the citizens of Berlin. Men were killed or transported to slave labour camps, and women were systematically raped. Eventually in 1949 the Russians ceded several districts in Berlin to the Allies and the famous division between West and East Berlin - a microcosm of the division of the entirity of Germany - was formed. This division was made physical when the GDR (The German Democratic Republic, which was the Soviet run East German government) put up the famous Berlin Wall, allegedly to protect its citizens from 'the fascists', but in fact to prevent them from escaping into the more liberal and prosperous West.

After the fall of the Wall, Berlin became the capital of unified Germany and a building boom began in the 1990s that included more than 30 major construction works in the east of the city. It has also become to be considered by many as the cultural capital of Central and Eastern Europe, excelling in every field but in particular those of dance/electronic music, contemporary art and dance, and classical and orchestral music. Berlin has three opera houses, over 150 theatres and playhouses, over 170 museums and collections and over 200 private galleries. Berlin also occupies a special place in Europe as an extremely liberal, socially progressive and tolerant city, placed in the heart of the continent, where East meets West.

Berlin's population is 3.4 million down from 4.5 million before WW2. It is a vast city, extending over 889 square kilometers. Its twelve bezirke (boroughs) are Mitte, Friedrichshain-Kreuzberg, Pankow, Charlottenburg-Wilmersdorf, Spandau, Steglitz-Zehlendorf, Tempelhof-Schoneberg, Neukolln, Treptow-Kopenick, Marzahn-Hellersdorf, Lichtenberg, Reinickendorf, although many Berliners still use old names and districts for purposes of orientation. 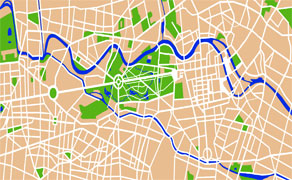 Positioned almost directly in the centre of Europe, Germany is the most affluent country in the continent and also the most populous, after Russia. It covers an area of 349,520 sq km (134,910 sq miles). The north of the country is largely flat, covered by the North German Plain and dotted with numerous lakes in the northeast corner, the largest of which is Lake Muritz. In the centre and towards the west it is more hilly, and here lie the areas of Bohemia and the Black Forest. The far southwest is very mountainous and is home to the beautiful Bavarian Alps. The highest point, Zugspitze, rises to 9,720 ft. (2,963 m). Major rivers include the Danube, rising in the Black Forest, and the Elbe, Ems, Main, Rhine and Weser.

Modern Germany has only existed since 1990, after the Berlin Wall fell and East and West were reunified. Originally 'Germany' was an area in Central Europe dominated by the Germanic 'Frank' tribe. It became part of the Holy Roman Empire of the German Nation in the 9th century and existed as such in various forms until 1806. As a result of the Napoleonic war the Empire was replaced in 1806 by the Confederation of the Rhine. Eventually all the German states, with the exception of Austria, united into the German Empire in 1871.

Under Wilhelm II Germany took an imperialistic course, which created friction between neighbouring countries and eventually led to the outbreak of World War I. After the war the Weimar Republic was established and Germany flourished - an exciting period characterised by something of the arts and decadence, referred to today as the 'Golden 20s'. However global depression and oppressive debts meant that Germany suffered from extreme unemployment and economic hardship in the 1930s: the political situation was such that the extreme right wing Nazi party was elected into power.

The terrors of the subsequent period in history are well chronicled as Hitler led Germany, and the world, into the bloodiest conflict of all time. After WWII, Germany's borders were redrawn and it was divided into two separate countries occupied by Russian troups in the East and the Allies in the West. Only in 1990, after the fall of the Berlin Wall in the previous year, were the two sides reunited.

Today Germany is the third biggest economy in the world and a leading member of the European union. It is also the top exporter of goods in the world. However it has the lowest GDP growth in Europe and its economy is undermined by the heavy subsidising from the West of the substantially poorer East, which has happened since reunification. High unemployment in particular is a problem.

Tourists flock to Germany to visit the stylish cities, legendary fairytale castles, beautiful lakes and forests, and for the hundreds of cultural and historic wonders - as well as to sample its world-famous beers, in particular during the Munich Beer Festival held every October. In the summer of 2006, tens of thousands will arrive to watch the World Cup Football Finals.

Terrible Don't even know who wrote this.

this is really help me for my homework

Reply Oct 12th, 2017
The fly that made you hit yourself
United Kingdom

Thanks this helped with my homework

It was great for my Report on "Top 10 Ancient Cities in the World." I enjoyed the information and was happy with my report grade with an A+ and a 97% Only missed 3 points because Of miss spelling. Now i'm grateful!

Amazing! Doing homework on Berlin, and this really helped!

Great, found what I needed for my homework.

great for a last minute h/w!!!!! thanks a bunch you guys!!! you saved me from the german teacher

Great for homework, thanks heaps

this is great for my research newsletter!!

Love this website! listen to all you haters... they tried their best go fuck yourself and try a different website this helped me with my project and i have to do a ten page essay on berlin you probably have to do a few paragraphs!

Found exactly what I needed!

thanks this is cool i love germany

same here this website is perfect for my project for germany

thanxx youu helped me with my project xx

thank you because this search helped me with my project

this site is the worst site i have seen in the whole internet!!!!!

Dude...this didn't help me! I'm trying to find out what life was like on the east and west side of the Berlin wall. I already know what caused them to build it. I want to know facts and information on what east ha for living and what the west ha for living..FML

thatnks you helped me with my homework

good site thanks alot for the help

Hi!Do you remember me?If you want give me a message on this page.I wish talked to you.Bye.Prodan Florin

this website is so helpful i have a five page paper due dec. 15 and i have to do it on Berlin Germany and its history Thanks alot

hey this is a good website...im in class rite now doing an essay on berlin...thanx a bunch!!! help me if u can

LOVEPARADE ONLY IN BERLIN

Uh more information about the geography i have a project due like this week and i need information about rivers through berlin. Uh and Density Size Industries those kind of things please ad thank you if you're reading this

this website helped me with my homewrok about germany thanks xoxo =] =]

The Loveparade is happening in Dortmund this year. And it won't be in Berlin again 'til 2011.

Hello, Does anyone know when and where the love parade 2008 is happening and is it in Berlin or Dumotrun

HI!!! im just a kid looking up info for an essay im doing. I was really looking for information on mostly eastern germany and how life was for the people who lived there when the berlin wall was up but it was good information for a different project my friend is doing. ill make sure she looks this up bye

Not really a review. I was looking for and entertainer by the name of Taco Ockerse. Anyone know how I can contact him. It's been a long time since I've seen him and thought it would be nice to catch up. Thanks, Marie