The weather in Riga changes more often than the traffic lights and seasoned pros carry a sweater and umbrella with them at all times.

Whereas you can't fly to Riga from anywhere in the world, the Latvian capital is widely accessible by air from most major European cities.

The lion's share of Riga's treasures are tucked conveniently away in the Old Town - as are most of the city's hotels and hostels.

Credit cards are an increasingly accepted form of payment in Riga, although their acceptance is not ubiquitous. In addition there have been some…

With a mere 1.5 million native speakers and only 3.2 total speakers you have to be a pretty dedicated linguist to want to get to grips with the…

Riga was officially founded in 1201, just over eight hundred years ago, as German merchants came over to colonise the Baltics. By 1282 the city was… 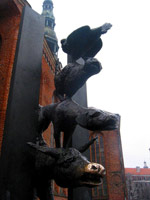 Above: Weird science by the Dome Cathedral Below: Nature meets geometry at the Vasnu Bridge 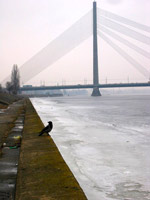 Riga, the most popular travel destination in Latvia, has been flourishing in the past few years, along with fellow Baltic capitals Tallinn and Vilnius, as Latvia's economy enjoys the boosts in tourism, foreign investment and number of cheap inbound flights that come from joining the EU.

When visiting Riga, time is essential: the traveller spending a whole week in the city is more likely to discover the hidden gems of Riga than a casual weekender, who is still more likely to see more than the stag weekender, mainly due to the somewhat essential challenge of waking up before the museums close. Nonetheless, even the most pressed for time can discover the charms of Riga's Old Town and perhaps see some of the stunning architecture of the Art Nouveau District. If staying for a few days, a venture into the Central District is well worth the walk, and a day-trip to beautiful Jurmala beach resort well worth the train ride.

Naturally, the life of the city begins in the Old Town, where most of the popular clubs and bars are situated, as well as a smorgasbord of restaurants serving Latvian food and just about any other cuisine imaginable. The area also houses hotels and hostels aplenty. Unlike its sleepier neighbour Vilnius, Riga's nightlife flourishes seven days a week, often into the wee morning hours.

Along with art and architecture lovers, nature lovers will find something to praise in Latvia's capital; 54.2% of the area of the city is made up of so-called "blue zones" (rivers, lakes and canals) and "green zones" (woodland, parks and urban squares). Perhaps the most noticeable is the Bastejkalns Park, which connects the Old Town with the Central District. Even in the winter its many benches are inviting for a rest with a warm cup of tea, and in the summer one can lay out in the sun with a good book or picnic.

Though the majority of Riga's attractions lie on the right bank of the Daugava, a venture over the pedestrian-friendly Akmens bridge, which conveniently begins at the edge of the Town Hall Square and provides a dramatic view of both the iron giant that is the Railway bridge and the geometrically stunning modern Vansu Bridge, is worth it for the view of the Riga skyline alone. Left bank Riga itself boasts enormous parks and Kipsala Island, home of the International Exhibition Centre where many interesting events take place.

One of my very favourite cities. I'd move there if I could...

I would recommend to take a company Latvian Tour Guides. They are professionals and offer a very good day tours. We had one to Sigulda city and also Rundale Palace tour.

i love riga it the best

Riga is an incredible city with so much culture and history to offer. The opera was first class. The different districts of the city are beautiful. Old town is so compact and filled with friendly and intelligent people. The people of Riga should be proud of their delightful city.

im looking 4 a pow camp in riga where my dad was in the 2. ww, imprisoned by the russians he was german.