Riga's history is as complicated as the Latvian language, and probably has just as many influences. Though an ancient Finnic settlement did exist on the site of present-day Riga, its modern history begins in the second half of the twelfth century with the arrival of German traders, mercenaries, and missionaries. In 1158, German merchants established an outpost for trading with the Balts on the site that would become Riga, and the first monastery was built in 1190. In 1201, the newly-proclaimed Bishop of Livonia, Albert, landed in Riga with 23 ships of over 1500 armed crusaders, and proceeded to, well, crusade. After making Riga his bishopric (greedy bastard, wasn't he?), he established the Order of Livonian Brothers of the Sword after running out of possible shorter names. Luckily, they later became a branch of the much easier to remember Teutonic Knights. That same year, Riga officially became a city, and its royalty and citizens were converted to Christianity, often against their will, as it went back in the day. 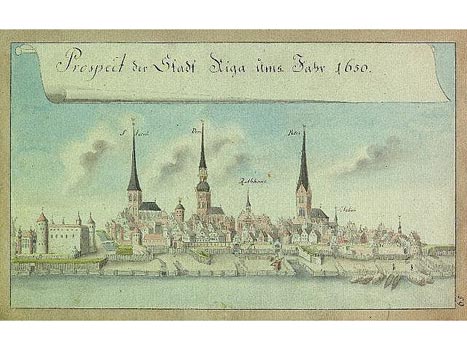 Thus, Riga as well as Livonia and Prussia came under the auspices of the Holy Roman (German) Empire. After the Reformation in the 16th century, Riga, Livonia and Prussia converted to Protestantism. Meanwhile, Riga continued to function mostly as a gateway to trade with the Baltic tribes and with Russia throughout most of its history, gaining a cosmopolitan population as well as influences both from Prussia, Russia, and the Latvian population in the surrounding area. Between 1561 and 1581 Riga gained the status of a Free Imperial City, but that was short-lived as soon Riga came under the influence of the mighty Polish-Lithuanian Commonwealth.

With new rulers came new religion, but the now thoroughly Protestant Latvians would have none of that ancient Roman Catholicism from the Commonwealth, and Riga was defended during the Thirty Years' War by the King of Sweden, who gained rule over the city in 1621 not only for political and economic gain but also in favor of German Lutheran Protestantism. The Russo-Swedish War of 1656-1658 brought the Russians to Riga's doorsteps, but managed to keep them out until 1710, when Peter the Great invaded the city and annexed it into the Russian Empire, where it remained an industrialized port city until World War I.

Throughout the many struggles and takeovers, Riga maintained its German heritage, despite the imposition of Russian in 1891 as the official language in the Baltic provinces. But the demographics were slowly changing, and Latvians began to supplant Germans as the largest ethnic group in the city in the mid-19th century. An increasingly prosperous Latvian middle class and bourgeoisie made Riga a center of the Latvian National Awakening with the founding of the Riga Latvian Association in 1868 and the organization of the first Latvian Song Festival in 1873.

All this would change in the turbulent 20th century. World War I brought the Russian Revolution and the German Army marching to Riga. In 1918 the Treaty of Brest-Litovsk was signed, giving the Baltic countries to Germany. But because of the Armistice with Germany, Germany and Russia renounced that treaty, giving Latvia and the other Baltic States their first taste of independence. After more than 700 years of German, Swedish, and Russian rule, Latvia, with Riga as its capital city, thus declared its independence on November 18, 1918. But as these things commonly go in this region, independence did not last long at all, and though Riga prospered and developed a democratic, parliamentary system of government with Latvian as the official language, World War II brought everything crashing down.

Stalin's shady deal with Hitler led the Soviet dictator to occupy and annex Latvia in 1940, but then Hitler came marching back to claim the Baltic state between 1941-1944, until the Red Army seized it back. Though 1945 brought the end of the horrors of war and the tug-of-war between the two superpowers over the Baltic lands, the damage had been done, with the Jewish population of Riga devastated, hundreds of thousands of Latvians dead and thousands in exile in countries all over the world. In all, Latvia lost one-third of its population and its independence, officially becoming a Soviet Republic. Perhaps Riga's turbulent history of occupations is best documented in the excellent Museum of Occupations in the city.

Though Soviet occupation undoubtedly changed the architecture of Riga, it also changed its demographics significantly. Hundreds of thousands of Latvian "Nazi collaborators" were deported to Siberia, while hundreds of thousands of Russians and non-Latvians from other Soviet republics were emigrated into the city and country. By 1975, less than 40% of Riga's inhabitants were ethnically Latvian. But luckily the end of the 1980s and the beginning of the 90s brought the toppling of the Soviet Empire, and after many struggles, Latvia declared its full de facto independence on August 21, 1991.

In 2001, Riga celebrated its 800th anniversary as a city. Today, Latvia is a full-fledged member of the European Union, a huge reassurance for a country that's been occupied dozens more times than it's been independent, and Riga continues to thrive, though its German and Russian past is just as present as its Latvian future.

Can you do another one of these, supper helpful

Of course, we're glad you enjoyed it! For which city/country?

i love the history of riga too

this country is so beautiful but so poor when i was little. i was born there and i lived there untill i was about 9 1/2 and i would love to go back and see my country and my parents again. great place to tour and see.

Excellent I found RIGA via Commodore HORNBLOWER by C.S. Forrester. Two friends have roots and have returned to Latvia after the fall of USSR