Riga's Old Town (Vecriga in Latvian) has a bit for everyone hiding within its Kafkaesque medieval streets; whether you're in the city to absorb culture like a sophisticated sponge or to drink it up ala Bukowski, you'll find everything you need within the confines of the Old Town. The best place to start would be the Town Hall Square (Ratslaukums) at the end of Kalku Street. The Museum of Occupations, the rebuilt Town Hall, and the stunning House of Blackheads, also rebuilt after the Second World War, surround the square as St. Roland's doppelganger watches the crowds of tourists take their pictures in front (the original statue of Riga's patron saint was damaged in the war and deemed too precious to remain out in the open). 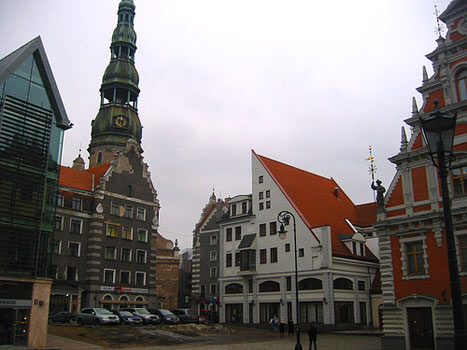 To really orient yourself in the city, a trip up the tower of St. Peter's guarantees a spectacular view (though we recommend going on a clear day to see the entirety of the city on both banks). From there it's a short walk to the Dome Cathedral and the square which surrounds it, full of some of the best cafes and restaurants in the city, with plenty of outdoor seating in the summer. Further left lie the historic Swedish Gate and remains of Riga's original city wall, as well as impressive medieval architecture among the Old Town's cobbled streets. On the bank of the Daugava River, close to the Powder Tower and Museum of War, stands the re-built Riga Castle, or more informally, the President of Latvia's crib.

Heading towards the Central District from the Old Town, one will likely pass the always-busy Liv Square (Livu laukums). In the winter, one can locate the Liv Square by following the major chords of cheesy pop music coming from the ice skating rink in the middle of the square. The rink attracts children and adults alike, foreigners as well as plenty of locals who know to bring their own skates, some of whom like to pretend to be Olympic contenders. Even closer to the Central District and bordering the Bastejkains Park is the beautifully restored Riga Opera House. Now, it's time to let the Freedom Monument guide you to see the charms of the Central District!

sounds cool i want to visit